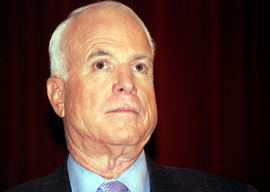 John McCain may be the most treasonous man who ever lived.

McCain must contend with Hitler, the Marquis de Sade, Benedict Arnold, and others to claim this crown. But John surpasses them all.

Some believe Hitler betrayed his people by leading them into conflicts they could not win. But at least Adolf had the ambition (or excuse) of reunifying historic borderlands. There is no evidence he ever entertained serious notions of attacking South America, central Africa, or conquering the Arab world. Not so John McCain, who has called for military intervention in each.

John jokes we should “bomb, bomb, bomb Iran,” that Venezuela should be forcefully instructed in practicing democracy, and he fully supports any means by which America can exert destructive influence over central Africa.

McCain’s wife was notoriously captured on camera kissing and holding hands with another man at a rock concert. His second daughter actively promotes an anti-American regime. His youngest child is a foundling from East Asia. Thus John belies commitments to faith, family, and blood all from the seat of his own home. Is there greater treason? When a man cannot control his own household’s affairs it is of vital concern when he presumes to control a nation’s destiny. When he self-effaces his own genetic heritage it begs the question what he has in mind for the greater body of Americans.

Even worse is McCain’s history as a turncoat. Many who were in co-captivity with him in Vietnam claim he switched sides when his comfort demanded it.

At various times, much to other prisoners’ chagrin, McCain has denied being interrogated by Soviet agents. But documents released in 1991 show McCain was engaged in approximately twenty interviews with communists where he was described as “exceedingly cooperative.” Evidence also indicates McCain made approximately thirty-two propaganda tapes for the North Vietnamese. No other soldier seemed to crumble to such an extent or with such evident zeal.

Many family members of those McCain (and fellow veteran John Kerry) heartlessly abandoned to lifetime incarceration in fetid jungles view these Senators as similar swine. While long suspected by those with experience on Capitol Hill, it is now beyond doubt that McCain conspired with other politicians to suppress, obfuscate, and destroy evidence that numerous American servicemen were held in Vietnamese captivity as late as the 1980s.

For loved ones of genuine heroes whose great mistake was having faith in the United States and its representatives, that pain and frustration is unimaginable. To know your kin is in a prison and the very people appointed to return them home willingly conspire with the enemy to hide that knowledge is a huge betrayal of public trust.

Not content with sacrificing dozens and perhaps hundreds of naÃ¯ve and decent youth to unremitting torture and their families to the purgatory of never knowing their ultimate fate, McCain is now doing the same to millions of American civilians. His policies will turn his nation into one enormous armed camp for its people, driving all peaceable citizens behind locked gates in suburban communities.