Jumping Off A Sinking Ship Just To Beat The Rush 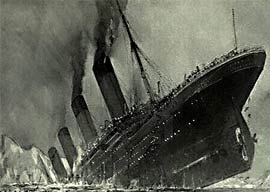 A study published last Monday in the Proceedings of the National Academy of Sciences revealed that between the years 1999 and 2014, white Americans aged 45-54 were the only demographic to show a consistently higher mortality rate. American whites of all other age groups experienced a decline in their mortality rate, as did blacks, Hispanics, and all demographics in every other “rich country” on Earth.

The increased mortality rate was almost exclusively confined to whites aged 45-54 who had only a high-school education or less. Including dropouts, this comprises about 40% of all whites from this age group. From 1999-2014, deaths per 100,000 among low-educated whites spiked by 134. While everyone else’s mortality rates were going down, this group’s death rate climbed 22% over the fifteen years documented in this study. According to the Washington Post, the only other large demographic group to experience an increased mortality rate over the past few decades were Russian men after the Soviet Union crumbled.

The study was conducted by a husband-and-wife team of Princeton economists, Angus Deaton and Anne Case. Last month Deaton was awarded the Nobel Prize in Economic Science. The data they analyzed was gleaned from Centers for Disease Control stats and other sources. Deaton and Case claim that their study was initially rejected by both the New England Journal of Medicine and the Journal of the American Medical Association.

Deaton said that he was initially startled by the study’s results. “Half a million people are dead who should not be dead,” he says. “You’re getting up there with HIV-AIDS.”

“This is a vivid indication that something is awry in these American households,” says University of Pennsylvania sociology professor Samuel Preston.

“Seldom have I felt as affected by a paper,” says Berkeley economics professor Ronald D. Lee. “It seems so sad.”

Dartmouth economics professor Jonathan Skinner says, “This is the first indicator that the plane has crashed.”

When adjusted for inflation, aging working-class whites experienced nearly a 20% decline in income during 1999-2014. They found themselves to be the expendables and castaways in our gloriously diverse economy that’s receiving endless infusions of younger nonwhite workers.

What’s perhaps most remarkable about the study, though, is the researchers’ conclusion as to what has caused the increased mortality rate. Across the board”including this demographic”people are succumbing to fatal illnesses less frequently, so it’s not that. Deaton and Case conclude that low-educated whites aged 45-54 were dying off from an increased suicide rate as well as the slow, grinding suicide that comes from binging on alcohol and painkillers. In other words, poor, middle-aged whites aren’t dying from disease”they’re killing themselves.

People don’t tend to kill themselves unless they feel hopeless. These middle-aged “rednecks” have become the modern version of the “drunken Injun” stereotype”a vanquished and hopeless caricature that is aggressively numbing itself out of existence.

We are told”constantly, unless we forget for even a half-minute”that the world’s “browning” will be a good thing, even for the poorest whites who are being the most severely browned-out by it. We are encouraged to shriek with triumphantly moralistic joy at the fact that from 1900 to 2050, this planet’s quotient of whites will have shrunk from 25% to 7%. We are ceaselessly lectured that although the numbers show that whites are losing wealth and power, it’s mentally healthy to celebrate this trend and a sign of the utmost evil to be “paranoid” about it.

But who in their right mind would think that a loss of power and numbers is a good thing beyond those who’ve been brainwashed and beaten down to the point where they equate masochism with virtue?

The endlessly maligned poor cracker class finds it has no voice in modern discourse. If they even make a peep about their plight, they are smeared as racists and xenophobes and retarded inbred hillbilly cretins who deserve every last bit of their accelerating extinction.

They are forced to listen as black billionaire Oprah Winfrey says the nation may finally be healed when older white people die off.

They see no media outrage when a Hispanic college professor makes the following genocidal statement to an enthusiastic crowd:

We have an aging white America. They are not making babies. They are dying. It’s a matter of time. [laughter] The explosion is in our population.