Keep Your Friends Close … Unless They’re in Washington 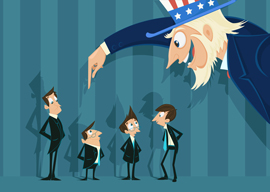 Gstaad—Can somebody tell me when was the last time America got it right? Uncle Sam’s track record in selecting leaders in faraway places reminds me very much of my own, where libel is concerned: Plaintiffs 5, Taki 0. Let’s see, the good Uncle overthrew Mohammad Mossaddegh in Iran back in the early 50s in order for the Shah to become his man in Persia. The Shah went gallivanting in St. Moritz, threw very expensive parties in Persepolis, and spent money like a Saudi camel driver-turned-prince for American weapons. But once the Shah became a pariah, the home of the brave chickened out. The Shah became Shah who? Only Henry Kissinger admitted knowing him and even managed to get him a bed in a cancer hospital.

What about the Diem family before that? They were bosom buddies with Eisenhower and the Kennedys until insiders in Washington started to talk down Madame (Diem’s sister-in-law) Nhu’s habit of spending lotsa moolah while Buddhist monks ignited themselves in protest of her Catholicism and corruption. The Diems were slain by generals who had been given the go-ahead by JFK, whose life was also terminated three weeks later. And America’s man in Panama, old Pineapple Face, was overthrown by Papa Bush once it became obvious he was selling happy dust to Gringos, the very same dust George W. must have been on when he invaded Iraq in order to make Israel safe to bomb women and children in Gaza.

“Our problems here in the West have nothing to do with Russia, but with the inability of anyone to tell the truth.”

Nah, I’d rather be an enemy than a friend where America is concerned. Netanyahu craps on American presidents and gets three billion smackers annually in return. And just look at the camel drivers. They sponsor terrorism everywhere with their financing of schools that teach how to kill the infidel, and the Yankees openly genuflect in front of these savages almost as much as the Brits do. Not to mention the Qataris, who paid ISIS cold hard cash to get them going in their chopping off heads business. There is no end in sight. As they say, Washington doesn’t know its ass from a hole in the ground, but it means well. The folly of forcing freedom on those who don’t want it makes Americans feel good when they get home and turn on the TV. Nothing is as important as that.

Which brings me to old Vlad the Impaler, no, not the Romanian Count Dracula, but Vladimir Putin, the man everyone in America and Europe hates, which is very good news for Russia. Putin is no Shah, nor Diem, and no Pineapple Face either. He will go on the offensive against any signs of foreign interference. What the bureaucrooks of the EU forget is that economic embargoes and trade sanctions are a form of strategic warfare. Washington can push small Central American countries around, as the EU did when Austria tried to go to the right some time ago, but Russia is now again a strong state that will not take crap or outside interference. And many Russians are eager to get revenge for what they see as a humiliation after the fall of communism. Putin’s annexation of Crimea made him a hero in many Russian eyes. Now that America and the EU see him as the baddest guy on the planet, Putin’s theory that America uses its power to foment revolution has come full circle. He knows that one cannot be Washington’s friend and long survive. He also knows that America uses covert force against regimes it doesn’t like. He most likely thinks that Uncle Sam covertly financed the jihadists in Chechnya. And why is that so crazy? Uncle Sam financed the Taliban against the Soviets and gave them missiles that are still used against American and NATO troops in that miserable country. He also knows the neocons in Washington rule the roost and want him encircled and humiliated.

The trouble with Putin is he’s no Saddam. Even Assad was no Saddam. So the neocons in cahoots with the EU crooks have declared an undeclared war on Putin’s Russia, one that doesn’t exactly make the Kremlin shake in fear. After the Cold War was over, George Kennan, an expert’s expert on the Soviet Union, fiercely opposed the eastward expansion of NATO and other measures that would take advantage of Russia’s weakness. He also advised against humiliating a great country like Russia, whose soul is somehow different to that of, say, Puerto Rico or Monaco. Kennan also fulminated against America’s hypocrisy. He insisted that America should put its own house in order first—I write this as Ferguson, Missouri burns—and become a republic known for its decency and humanity and social success. Putin has read Kennan and looks at Brussels the way I look at the Papandreou clan in my own country, a bunch of crooked midgets who couldn’t punch their way out of a wet paper bag.