Kicking the Can Over the Cliff 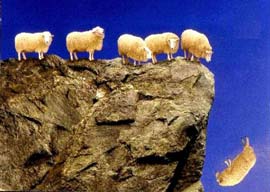 Anyone who has two brain cells to rub together for warmth on a cold winter morning knows that this whole “fiscal cliff” debate is nothing more than a petty squabble over tweaking the amount of a terminal cancer patient’s chemo. If Team Red and Team Blue ever hammer out a deal, it will amount to scooping a thimbleful of water out of the ocean. Preventing another recession”let’s pretend we ever came out of the first one”will not forestall an inevitable catastrophic depression.

Still, most of the government’s media mandarins have been successful in deviously flipping the core issue. The question the MSM’s federal shills keep asking is “Who will pay the bill?” rather than “Why the HELL is the bill so large?” You”ll hear them prattle all day and all of the night about “hate” and “anger” while keeping absolutely mum about “fractional reserve banking” and “fiat currency.”

“Quantitative Easing” is a sweetly perfumed term that actually means “anal dilation for taxpayers.” It’s not as if the average American taxpayer currently “owes” over a million dollars in unfunded government liabilities. Pretend that’s just a figment of warped conspiratorial imaginations. Question the sanity of anyone who dares to make it an issue.

Trying to rein in Leviathan is somehow depicted as “obstructionist.” One must never obstruct the bloody beast. One must continue tossing raw meat into its maw. Anyone who stands in the beast’s way is full of “hate” and “anger.” We know who the problem is here, right? It’s those Tea Party redneck rural paint-huffing Bible-thumping cousin-humping bigots who aren”t like we are and whose chief sin is that they don”t like people who are different than they are. We all know it’s a scientific fact that those people are only against abortion because they prefer the taste of newborn babies.

The average naÃ¯ve and uninformed American seems to believe that a politician’s main role is to care about his or her feelings. As long as the words sound vaguely compassionate and the soundtrack is uplifting, they”ll swallow whatever ball of honey-coated dung that politicians feed them. In truth, politicians care about us so much, they even indenture the unborn to lifetime financial servitude.