Killjoys Be Gone: The Duke and Duchess of Cambridge Get Hitched 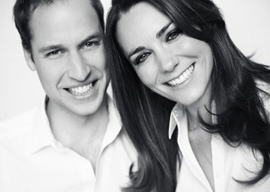 At the risk of being antiquated, I am wholeheartedly in favor of the nuptials taking place today in London. This, despite its apparently being dÃ©classÃ© for one to admit to having romantic notions of happily-ever-after, adore the regalia of circumstance, or participate in an unabashed adoration of tradition.

What sours me on the event is the manner in which so many seem eager to dismiss it. For whatever else, this is one of the singular moments of our time. (If one disagrees, please recall that it will be the most watched event in 15 years, with an estimated 2 billion global viewers.)

In short, it is a glorious celebration of the heritage of many of us and a rare opportunity to see an antiquated finery which was once far more common than today put on to its full display.

And if not all agree, we can consent to disagree, except in that those who will avoid the wedding coverage (or claim to avoid it) seem intent to ruin the enjoyment of everyone else. In my specific case, a fellow quipped to me that he thought it ridiculous that millions of people would camp along the Royal Procession for a mere momentary glimpse of the Royal couple.

“At best, perhaps you will spend 7 uninterrupted days of your life making love to another person.”

To this end I feel I must, as they say, burst his bubble.

The following are of course averages and they vary between a 70 and 80 year life span. Most of them I have rounded to the lowest numbers rather severely, so even if one thinks they do not apply personally to the reader these numbers are likely quite representative. As to the television number, it is for 3 hours a day, though most people watch it for 4 hours and many as high as 7 hours. Even if one is disinclined to the lowest number for television viewing, internet use and electronic gaming will likely make up the difference.

With that, for all those who would begrudge today’s grand moments, I present the following: