L.A. Is Not So Black and White 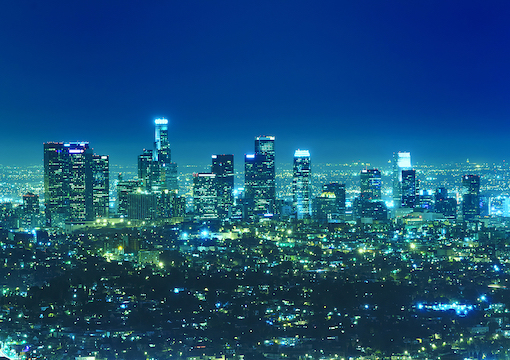 Last month, a loyal reader called me out on my critique of Ron Unz’s position on race, immigration, and the 2020 Summer of Hate. Unz’s view in a nutshell is that the riots and looting prove that America’s real problem is with blacks and leftist whites, not nonwhite immigrants. Unz essentially told rightists to ditch the immigration opposition thing and stop fussing over the “dystopian nightmare scenarios” associated with slow but steady population replacement.

I rather thoroughly countered that position (no need to rehash; you can read it here). But my loyal reader pointed out that four years earlier I’d written in praise of my own city’s rapid “population replacement” of blacks by Mexicans. Was I being a hypocrite for slamming Unz now?

To best answer that point, we need to go back to 1983, as I was attending an all-black (well, 85%) high school. The neighborhood in which my parents had purchased their home in the 1970s was safe and moderately upscale. The problem was, it was separated from a bad area by just one street—the literal “tracks.” West of that street? Beautiful homes, white/Jewish residents. East of that street? Crack houses, black residents, and LAPD roadblocks (to discourage drug-buying vehicle traffic).

Now, we on the “good side” were never troubled by the bad, because in those days the LAPD could crack skulls at will. Blacks knew not to cross “the tracks.” After all, this was an era in which LAPD officers started their shift by announcing, “It’s monkey-slapping time.” The LAPD profiled, and we profiled. We knew who didn’t belong, and any stray Ja’Marquis seen traipsing down our streets would warrant dialing 0 (we didn’t have 911 yet).

Needless to say, circumstances are different today. The LAPD has been neutered by “reform,” and profiling leads to federal hate-crime charges.

My neighborhood would be a living nightmare were 1983 demographics still in play. But thankfully they’re not. In the 1990s and 2000s, L.A.’s blacks were caught in a classic pincer movement: gentrification from the west and north, Mexicanization from the south and east. Anything adjacent to a good area on the Westside in the 1980s is now a good area itself. Any black area on the Eastside or Southside is now Mexican. Black population replacement at the hands of Mexicans was so thorough and brutal, in 2014 Obama tried to use RICO statutes to force L.A. Mexis to accept at least some mayate neighbors.

“L.A.’s blacks have been so reduced in numbers, they can’t even have an effective riot without whites.”

It didn’t work. Even the mighty Obama from Wakanda couldn’t save black L.A. Blacks have dropped to 8% of the city and 7% of the county. It’s not just that blacks have been chased from white-adjacent neighborhoods; it’s that they’ve lost (or are rapidly losing) their concentration. There are few remaining areas left in which blacks are collected en masse. Sure, 8% of a city with a population the size of L.A.’s still means a lot of individual bodies. But black criminality increases with concentration, and that’s gone, finished.

And by any measure, L.A. is better for it. You know that viral online ad from the black GOP candidate in Baltimore where she walks through dilapidated neighborhoods and they magically get better as she passes? Well, that’s what happened to every area on the Westside once blacks made their exit.

The Eastside and Southside areas, now overwhelmingly Latino, still have crime issues, but it’s a different kind of crime than black crime. There are gangs, sure. And they do gangy-type stuff in their own neighborhoods. But apart from that, Mexicans tend to favor white-boy crimes. Drunk driving (man, do they love drunk driving), petty theft, car theft, diddling the kin. I mean, it’s not great, but it’s not the kind of hate-based vicious stranger-violence you get from blacks. It’s not the “fender bender leads to a driver gunning down a white dad and his daughter” kind of violence. It’s not “steal the money, then execute the white mom just for kicks” violence.

Hispanics now make up almost half of the L.A. County Sheriff’s Department (45%). Blacks comprise a paltry 9%. Those Hispanic deputies oversee the formerly all-black, now predominantly Hispanic areas like Compton. And their attitude toward the remaining blacks is unsentimental, as evidenced by the pervasive rumors of Hispanic deputy cliques where membership ink is earned by killing black people (kinda makes “monkey-slapping time” seem quaint by comparison).

Last month, when a Hispanic deputy turned a black dude named Dijon Kizzee into sidewalk spread, South L.A.’s remaining blacks tried to organize a riot outside the local sheriff’s station. It fizzled, because blacks were fearful of starting shit with Mexicans in a Mexican neighborhood patrolled by Mexican deputies.

Even the most inveterate black criminal knows when he’s outmatched and outnumbered.

Last week, when BLM thugs decided to hold a Breonna Taylor traffic-blocking protest, they had to come into West Hollywood to do it, because the only way to harness the warm bodies needed for such an aktion was to enlist the aid of whites. L.A.’s blacks have been so reduced in numbers, they can’t even have an effective riot without whites. Worse still, they can’t even get a riot going about the killing of a local black, because the offending deputy was Mexican. So they had to settle for blocking streets over a grand jury ruling about a black death halfway across the country.

The people who gave the world the Watts Riots and the Rodney King Riots now have to hide like little bitches behind skinny-jeans-wearing whites, as they protest the death of a black woman in a city they can’t locate on a map.

Oh, how the mighty…

That blacks are losing their presence in L.A. is bad enough. What really smarts is that no one is mourning their exodus. No one is saying, “Boy, I wish that neighborhood was black again.” This is a bitter pill, but one that blacks should be forced to swallow. What’s the 1619 Project if not a campaign to prove how necessary, how essential, blacks have been to America? But L.A. torpedoes the myth of black indispensability. According to the worldview of far too many blacks, there are only two types of American cities: those properly enriched by blacks, and those still in need of enrichment. But L.A. is post-monochrome America. We had the enrichment, it’s being phased out, and we’re doing better as a result.

That’s a precedent that should scare the hell out of black Americans.

Blacks need to understand the inevitable fruits of their conduct and attitude. The hostility, the criminality, and most important, the toleration and excusing of criminality. And the paranoia, which, to be frank, is not entirely unjustified. Black Americans obsess over feeling unloved and unwanted. The “black national anthem” shouldn’t be “Lift Every Voice and Sing,” but “Nobody likes me, everybody hates me, I think I’ll go eat worms.” Yet blacks have avoided introspection regarding why they’re unloved by blaming everything on “white supremacy.”

The L.A. example is important, because it lays bare that it ain’t just whites. As Shaun King’s rebooted North Star was forced to admit following the Kizzee killing, “Police brutality does not end with white police officers and Black civilians. In some areas of the county, like Compton, Black civilians, even the Black mayor, are profiled and attacked by non-white police officers. What is it about being Black that turns non-Black folx so sour?”

King’s hack squad intended that question to be rhetorical, but blacks need to start asking it in earnest.

Now, at this point you might be saying, “Wait, Dave—aren’t you agreeing with Unz?”

Not really. Unz has a handicap, a cognitive limitation: He thinks in simplistic extremes. I discovered that when he tried to engage me on the Holocaust. He can only wrap his brain around zero-sum dichotomies: complete Holocaust denial vs. total “6 million” acceptance. He can’t comprehend a nuanced space in between. Similarly, regarding immigration, Unz can only view the debate as “immigration is great everywhere” vs. “immigration is bad everywhere.” He can only think in one-size-fits-all absolutes.

In L.A., our situation is the result of our own unique racial/ethnic ecosystem. There’s a lot of talk this year about “foundational blacks” (black Americans with roots dating to slavery). In L.A. (and in California in general) we have our “foundational Mexicans” who see themselves as “historical” Angelenos and Californians. I say “see themselves” because it’s their perception that matters, as it influences their behavior. Regardless of whatever extent today’s Mexican Angelenos actually have any ties to “old L.A.,” the fact is, they don’t see themselves as immigrants. They see this city as part of their heritage and culture, and they behave accordingly. It’s this notion of “belonging” that makes Mexicans in L.A. so much easier to live with.

When blacks did have their own L.A. “hoods,” they seemed to do nothing but whine about getting out. Rather than saying, “Hey, it’s great to be here,” their attitude was “Dammit, I’m being kept out of there” (this is the result of a leftist ideology that eschews black contentment in favor of perpetual dissatisfaction). Conversely, L.A.’s Mexicans are quite happy in their own neighborhoods, with every billboard and storefront in Spanish, with their taquerias and licorerías and Iglesias de Jesucristorias. They don’t see their neighborhoods as a “step down.” They don’t live with the hateful envy and feelings of inadequacy masked by prideful entitlement that so plague the black community. When the residents of 95% Latino Boyle Heights in East L.A. use guerrilla tactics to keep both blacks and white/Jewish gentrifiers out of their community, I say, more power to ’em. They like where they live because they feel a historical bond with their neighborhood. They have no desire to be affirmative-actioned next door to me on the Westside.

I can live with that.

But here’s what Unz misses: You can’t replicate these results elsewhere, and you shouldn’t try. You import a bunch of Latin Americans (or any Third Worlders) to the Midwest or the Rust Belt or wherever, and you’ll get immigrants who act like immigrants—foreign bodies. What works organically in L.A. can’t be artificially re-created in, say, Iowa. What we have here has been forged over time. It’s not a perfect situation, but it’s livable. As the saying goes, it’s not the best deal, but it’s the best deal we’re gonna get.

But our relative success (relative to, say, downward-spiraling hellholes like Chicago or NYC) shouldn’t be used as an excuse to throw open the borders. We still have plenty of crime, just not the kind of hateful, sadistic, disproportionately violent crime you get with blacks. So if you happen to be lucky enough to live in a part of the country with sparse criminal activity, don’t import more of it.

To put it as succinctly as I can, just because in L.A. we could be doing worse doesn’t mean you should surrender your right to be doing better.