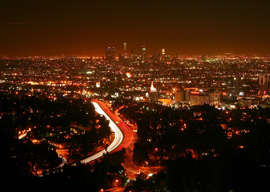 Consider it one of this summer’s most underreported stories. In what’s described as “one of the largest civil rights indictments in L.A. history,” an old-school Mexican gang”one of the original Mexi gangs that date back to the pre”World War II era”ran a ruthless campaign to keep “niggers” out of its neighborhood. The Big Hazard gang (also known as Hazard Grande) runs the streets in Boyle Heights, a neighborhood in East L.A. As of 2010, Boyle Heights was about 94% Latino, owing in no small part to the fact that Big Hazard had an unwritten rule about not tolerating black residents. In recent years, however, blacks had slowly been making inroads into the community, so Big Hazard decided to put a little fire and brimstone behind its unwritten rule.

Well, fire mainly. The gang embarked on a campaign of hurling Molotov cocktails at the homes of black residents who didn”t get the message that they weren”t welcome.

Now, when I say the story has been “underreported,” I don”t mean there’s been a blackout (pardon the term). The story has received obligatory coverage in all the usual fish rags, from the Times of L.A. to the one in New York. But what’s missing is the outrage. Big Hazard’s activities were tolerated (to say the least) by the local Latino population. Was there perhaps some fear of speaking up against the gang? Sure, but still, it’s a local gang, made up of local boys. Where are the calls for the neighborhood to undergo “racial sensitivity training”? Where are the black leaders locking arms and marching through the streets in defiance? Where are the garment-rending op-eds and monologues from leftist journalists, hosts, and pundits?

Has anybody angrily confronted Edward James Olmos (who was born in East L.A.) about how he has a “responsibility” to go down to Boyle Heights and lecture his fellow Mexican Angelenos about the evils of racism? Of course not. In short, as you don”t need me to tell you, there has been no outrage because whites aren”t involved (except as, you know, the lawmen trying to bring justice to the blacks of East L.A., but don”t think for a moment that any black person is going to give whites any kudos for that).

“There is something to be said for actually living in an area before expressing uncompromisingly strong views about what needs to be done to “save” it.”

This is a point much discussed here at Taki’s, and in my own column specifically: Outright racism by Latinos against blacks gets little coverage in the liberal press and no outrage from SJWs, and black “civil rights leaders” are scared shitless to confront it with the same merciless, take-no-prisoners attitude they reserve for every perceived “microaggression” from whites.

We all know this.

What I”d prefer to concentrate on is the fact that the Big Hazard story, and the (non)reaction to it from the usual suspects, slightly, just slightly, lays bare one of L.A.’s dirtiest little secrets: Most nonblack Angelenos are probably rooting for what the gang is doing (the goal if not the methods). I”m neither celebrating nor defending that notion; I”m simply presenting it as the learned observation of a guy who was born in L.A. 47 years ago, and who has always kept his primary residence right here in this city. Among L.A.’s white and Asian residents (for the purpose of this piece, Jews, Persians, and Armenians are counted as white), Mexican neighborhoods are seen as preferable to black neighborhoods.

Mexican neighborhoods, while still not the best places to go jogging at 1 a.m., are generally safer and more productive than black neighborhoods. Again, I”m not celebrating that fact. But it is a fact. As formerly all-black neighborhoods like Compton and Watts have become majority Latino, the crime rate has gone down excepting the increase in crime that comes from localized battles between black and Mexican gangs. That problem will dissipate once one group achieves its desired hegemony, and given the choice, most white Angelenos will root for the Mexicans.

There are several reasons for this. The first is a simple desire for self-preservation. Yes, members of both the black and Latino communities bring crime to the city. Burglaries, car thefts, gang activity, etc. But the black community is an exceptionally angry community. There’s a hatred there, specifically against whites, that leads to an entirely different type of crime…unreasonably, unnecessarily violent crimes targeting whites. Now, you can say what you will about black rage. Hell, call it justified if you want (I”m directing that at my leftist pals). But don”t call it fictional. It exists, and I”d rather not have it in my backyard. The black community has been growing more and more irrational each year, and less willing to get along. Damn near every slight seems to lead to a riot, and there’s seemingly nothing whites can do to mollify the rage. If you”re white and you try to help the black community, you”re a patriarchal racist. If you”re white and you don”t try to help the black community, you”re a neglectful racist. Regardless, you”re already a “privileged” racist anyway by virtue of your skin color.

On the other hand, the Mexican community here is not really all that angry at whites, owing in large part to the fact that so many California Hispanics consider themselves white. Sure, you”ll get a bunch of loud young Mexis who”ll go downtown occasionally to protest immigration laws, but Mexicans here are not race rioters like blacks. In fact, I”d argue that Mexicans are L.A.’s buffer against the kind of BLM race riots we”re seeing across the country. You know how easy it used to be to get blacks to riot in L.A.? In February 1992, a group of Holocaust revisionists (at the invitation of a black activist) met at a Masonic hall in L.A. for a “summit.” All it took was for the JDL to “leak” to a few local black leaders that “da Klan” was meeting in L.A., and in practically an instant, 300 angry blacks (and a few red-bandanna-wearing white commies) showed up, beating attendees, hurling bottles, and necessitating the arrival of a legion of foot and mounted police in riot gear to sort everything out.

Two months later, though, black Angelenos learned a harsh lesson, as their beloved “Rodney King riot” was, by day two, hijacked by Latinos who just wanted to steal stuff from the stores that blacks had smashed the previous night. What started out as a race riot was soon robbed of its ideology by apolitical, opportunistic looters. Black rioters had wanted to beat and kill whites and Asians. Mexican looters just wanted some free TVs. Given the choice, which community do you think L.A.’s whites and Asians would prefer to live next door to?

I have to admit, these days I find myself getting rather shirty with the single-issue anti-immigration Trumpheads who opine endlessly about Southern California’s “illegals” problem without actually living here. If President Trump were to carry out his super-duper deportation plan, who the hell do you think would retake the communities emptied of Latinos? Who”d rush in for the low-income housing? Swedes? Welshmen? Mark Steyn’s distant Belgian cousins? I get pissed at the pundits who cheer the notion of removing Southern California’s undocumented Mexicans with no thought given to the unintended consequences for those of us who live here. Note to Canadian (and other far-removed) deportationists: A significant number of the people who live here do not want Watts and Compton to become black again. Do you get that?

Of course, one can fantasize that once the undocumenteds are rounded up and deposited south of the border, white developers will rush in to start gentrifying some of the now-half-empty neighborhoods, effectively pricing out the blacks. Sorry, but that ain”t gonna happen. An uncompromising coalition of local leftist politicians and activists has sworn eternal opposition to the gentrification of such areas (Boyle Heights specifically, as you can read here.)

And here’s another reason most Angelenos will root for Mexican neighborhoods over black ones. Now brace yourself, because this is a leftist talking point, and damn me for sayin” it, but the left actually gets this one right: Mexicans (including the undocumenteds) do the work in L.A. that blacks (and the rest of us) won”t do. Sorry if I just gave you a hate stroke, but it’s true. Mexicans work cheap and hard. Every wealthy L.A. neighborhood relies on the daily presence of Mexican workers. Here’s an L.A. fact for ya”if you drive through the average moneyed L.A. neighborhood during the day, you”ll probably see as many Mexicans as whites. Because they do the work that keeps those neighborhoods running. Unlike blacks, you never hear of Mexicans being hassled by police in L.A. for being in the “wrong” neighborhood, because Mexicans, by virtue of their hard work, have earned the right to be a daily fixture in the priciest neighborhoods in the county.