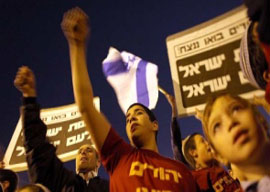 Zionism is based on a tribal concept, and we could argue day and night until our foreskins fell off as to whether that tribe is essentially religious or ethnic. Ever since its latest incarnation in 1948, Israel has (pick one) endured/perpetrated an unceasing barrage of (pick one) tribal/racial/religious conflict.

But December 2010 saw an astonishing series of ethnically charged events that signal an ominous tectonic shift in the nation’s Jewish-Arab relations. From my distant vantage point, it seems as if Bagellnacht, AKA Night of the Long Torah Scrolls, isn”t far away. Since Israel is the tiny locus upon which spins the fragile dreidel dividing East from West, this volatile situation could have massive international implications.

On December 7, a group of about fifty Israeli rabbis, many of them government employees, signed a ruling instructing the country’s 5.5 million Jews to immediately cease renting and selling property to “non-Jews,” commonly understood to signify Israel’s estimated 1.3 million Arab residents. The petition claimed the Torah forbids selling “the land of Israel to a foreigner” and urged that any Jews who transgress this prohibition should be “ostracized.”

A Jewish separatist organization called Lehava (literally “Flames” but based on a Hebrew acronym for “Preventing Assimilation in the Holy Land”) eagerly picked up the rabbis” torch and set up a voicemail snitch line whereby citizens could report Jews suspected of renting apartments or selling land to Arabs. After verifying individual claims, a Lehava spokesman said they would then publish offenders” names “in a list of disgrace…so the public can decide what to do with them.”

Such lynch-mob threats may seem like lonely barking from the fringes, but a recent poll found that 44% of Israeli Jews support the rabbis” rental ban, while 48% oppose it. When it comes to this topic, the Jews can”t choose.

Around the time the rabbis issued their rental ban, Jerusalem police began a two-week process of rounding up and arresting nine members of a reputed Israeli nationalist youth gang suspected of at least ten group attacks on Arabs”and in one case, a Chilean tourist mistaken for an Arab”over the last few months. Many of the assaults were said to have been arranged via Facebook and text messaging. They reportedly employed a common MO”the same fourteen-year-old Israeli girl (now among the arrestees) would walk up to an Arab youth and ask him to take a walk or go smoke a cigarette with her. She”d then lead the unsuspecting male to an area where the gang”whose members in at least one report were all wearing Orthodox skullcaps”was lying in wait. They”d set upon their enemy with fists and stones and bottles and tear gas, taunting and threatening to kill them for being Arab, knocking at least one victim unconscious, and sending a few to the hospital.

“Israel was intended to be a safe haven for Jews but at times more often resembles a bull’s-eye for anti-Semites.”

Amid a salty sea of signs with slogans such as “JEWISH GIRLS ARE FOR THE JEWISH PEOPLE,” the rally fixated on the idea that subhuman Arab males were preying upon and defiling the holy wombs of precious Jewish maidens. “Any Jewish woman who goes with an Arab should be killed,” announced one rally speaker. Another orator hammered home the idea that Jewish men needed to stand together and form a proud, tall, firm, and fully erect wall between Arab schlongs and Jewish snatches. “We are not racist, we are just Jews,” he told the herd of yarmulkes clustered before him. “The Arabs are coming and taking our daughters. We will not allow it.”

Local rabbi Nissim Itah told the crowd, “Girls, there are plenty of Jewish youth. I am asking our Arab neighbors not to hit on our girls.” A poster seen at the event also obsessed on the don”t-mack-on-our-chicks motif: “I WILL NOT ALLOW THEM TO HIT ON MY SISTER! WHAT WOULD YOU DO IF AN ARAB HIT ON YOUR SISTER?…PUT AN END TO IT! LOWER THEIR CONFIDENCE!”

Reppin” for the other half of Israeli Jews, leftist counter-demonstrators toted signs with such charming taunts as “I LOVE ARABS”ASK ME HOW,” “IF YOUR SISTER IS AS DISGUSTING AS YOU, WHO WILL HIT ON HER?” and “IF AN ARAB HITS ON MY SISTER I WILL ASK HIM IF HE HAS A BROTHER FOR ME.”

Among the rally’s organizers was Lehava, the same group who set up the rental-ban phone-snitch line. On December 27th, a day after Knesset member Yaacov Katz encouraged shooting Bedouin smugglers to help fight “demographic terrorism” against Israel, Lehava released an open letter signed by thirty wives of “prominent Israeli rabbis.” The letter warned of a rising trend wherein sweet-talking Arab men, sometimes altering their names to falsely appear Jewish, will indulge in “temporary” wooing behavior until they are able to snag the hapless Jew gals back to their goat-fucking shit-hole caveman Islamic villages, where “everything changes…and the attention you so desired will turn into curses, beatings, and humiliations.”

The letter counseled Jewish girls to refrain from dating Arab men or even working alongside them. It also spoke of “future generations” of the Jewish “holy race” that could be despoiled by knockin” boots with Arab dudes.