Latinas in the Field 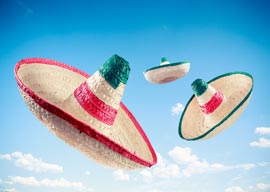 It took me a while to understand why some of today’s leading generals in the war to enforce politically correct speech and behavior codes are Latinas. Jewish organizations were the foundation-builders of PC nonsense, and white feminists and black activists have in many cases one-upped the founders with their skill and enthusiasm for banning “offensive” speech and expression.

Gay and lesbians have also had a good run with the ball (wait…is that phrase transphobic?).

But growing up in L.A. in the “80s I never knew a politically active Mexican, and damned if I wasn”t surrounded by Mexicans. Hell, to this day I still don”t know whether to say “Hispanic,” “Latino,” or (in Edward James Olmos voice) “Chicano.” I was never sufficiently lectured and browbeaten on that issue.

So it’s with great interest that I”ve been monitoring the rise of the young Latina PC police. My take on the newfound prominence of Latinas in the field is that they share with Jews the ability to be many victims at once, and, therefore, to have multiple ways in which to be offended. Just as a Jew can find identity through religion, ethnicity, race, or nationality (Israel), Latinas have the female thing, the ethnic thing, the racial thing, and the nationalism thing. Plus, many of them declare not just Latina identity, but Native American too, and that’s a peach of a thing to claim these days (hell, it can even get a white woman elected senator).

All of this came to mind last week when USA Today ran an op-ed by Latina activist Dani Marrero, international news editor of the Suffolk Journal (the undergraduate student newspaper of Suffolk University). The op-ed, titled “4 things not to do while celebrating Cinco de Mayo,” was exactly the type of badgering my Latino schoolmates negligently refused to provide me.

The four dictums are:

1) Don”t buy sombreros, panchos, or fake mustaches. “Our traditional colorful materials and attire,” Marrero writes, “are not for you to dress in once a year to mock and pretend to be Mexican.”

3) Don”t modify our words to phonetically match your fraternity or sorority name.

4) Stop calling guacamole “guac.” Now the gloves are off! Marrero demands that the word never be shortened, as “it comes from indigenous Nahuatl language, so please make the effort to pronounce it in its entirety.”

Ms. Marrero wouldn”t respond to my request for comment, but another fiery Latina PC cop did: April Negrette, the junior researcher in the Department of Environmental Science and Policy at UC Davis who made a stink last year when she was ejected by police from a San Francisco Giants game after harassing another attendee about his Indian-themed attire and forcing him to surrender it (needless to say, Negrette went on to become a Huffington Post blogger, where she described the altercation in all its whiny detail).

I asked Ms. Negrette to explain what gives her the right to instruct other human beings how to dress. “David I could try and help you out – but I can’t fix ugly,” she replied, adding “what gives YOU the right to confront me?” Having just a little too much fun, I responded: “I’m a carbon-based life-form, neither better nor lesser in value than you, and thus worthy of contacting other human beings.” I got an “LOL” for that, but then she got serious again: “You came in guns blazing on your white privilege horse crying around about free speech … Bottom line. And for the record, it is never the place for an oppressed person to have to explain to the oppressor why they are oppressed. Never. Ever. Recognize who grandparents bones your house is built on top of before you come at me or my community again.”

As our correspondence continued, she seemed more and more perturbed by the fact that I”d dared to contact her: “What makes you SO ENTITLED to feel that you deserve a better understanding of my reasoning?” Sheesh. I”d think the “entitled” one is the one thinking she’s above being asked a simple question about a public altercation she started. She continued: “im way above you and don’t have time to educate some ignorant white dude who has so much free time that he can pick on native wombyn who dare stand up to people mocking whats left of our cultures.”