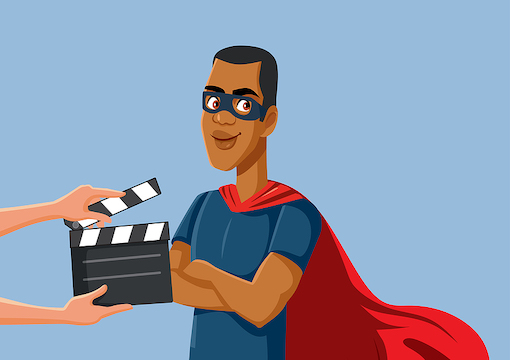 Why do some attempts at social engineering and racial apartheid work, while others don’t? It often comes down to whether the machinators choose to acknowledge human nature or ignore it.

So let’s take a look at the first industry-wide attempt to make Hollywood less white, and we’ll reason out why it failed.

Leftists have long sought to de-whiten Hollywood’s on-camera talent. I stress “on-camera,” because behind the scenes, in terms of studio heads, producers, and network execs, Hollywood is content to be exceptionally not diverse (unless your definition of “diverse” is that some names end in “stein” and others in “berg,” “witz,” and “thal”). But “diversifying” the faces in front of the camera has been a long-term project for those who think that trading the Grace Kellys for the Leslie Joneses will heal the nation or whatever (the “Phase 2” in between “Phase 1: Ban white actors” and “Phase 3: Utopia” is something the Underpants Gnomes have yet to elucidate).

“The 2002 ‘diversity push’ failed because it ignored human nature and the intricacies of the system it was attempting to alter.”

2002 brought the first major push to decrease the number of white faces in films and on TV shows. The NAACP, in partnership with television networks and movie studios, forced casting directors to hold daylong meet-and-greets with “undiscovered” nonwhite actors.

A little “inside baseball”: There’s a time-honored pecking order in Hollywood regarding casting. Actors are represented by agents, who vet the actors for ability and sign them to exclusive contracts. Producers hire casting directors to find actors for their projects. The casting directors inform agents of the roles they’re casting, and the agents submit the appropriate actors. Casting directors never see unvetted talent; it’s beneath them. So it was a great ignominy when the NAACP/networks/studios coalition demanded that casting directors see every nonwhite bum who demanded entry into their office.

And many of those nonwhite bums shambled in without even the standard headshot and résumé (as reluctantly confirmed by the L.A. Times, some of those “actors” literally brought pieces of paper with crayon scribbles saying “me actur, make star, gib money”). I’m not sure I can properly convey how unsettling this was to casting directors. The process had been disrupted. Agents vet the talent, and then send the vetted actors to the casting directors. And now the “coalition” was forcing casting directors to meet with unvetted filth, while at the same time cutting agents out of the picture entirely (which pissed off the agents).

And there was another factor that doomed the 2002 diversity aktion. The NAACP, staffed as it is by simpletons who likely couldn’t pass a third-grade standardized test, hadn’t bothered to even try to know the mindset of the black actors they were supposedly helping.

Actors are the easiest people in the world to understand: They don’t want competition. They’re insecure, frightened, and mercenary simple-minded organisms. So black actors were not even remotely supportive of the NAACP’s push to truck in tons of unvetted black actors without making them pay their dues. Who, in any profession, would be like, “Oh, by all means bring in more competition for me! And fast-pass them to my level without having to clock in the hours that I’ve logged. By gum, I welcome the job insecurity!”

The NAACP barged into an unfamiliar industry thinking that its brand of racial identitarianism (“BRING IN MOAR BLACKS!”) would be shared by the blacks who actually work in that industry. But in fact those Hollywood blacks did not want “moar blacks.” They wanted “moar jobs,” and pumping in thousands of new blacks would crowd the watering hole.

At the same time, the NAACP pissed off the agents and casting directors by circumventing the former (“We’ll force casting directors to see unvetted talent, thus removing you from the equation”) and tormenting the latter (“We’re gonna make you bring 7-Eleven schizos into your office, and if they shit on the floor that just means they like you”).

The 2002 “diversity push” failed because it ignored human nature and the intricacies of the system it was attempting to alter.

Race theory succeeds when it reflects reality. It fails when it tries to supersede reality. I’m reminded of that time when Hitler’s favorite surrogate son Léon Degrelle dared to disagree with his führer. Hitler had decreed that once Russia was conquered by the Master Race, no German soldier would ever entertain the notion of cavorting with the filthy Slavic babes. But Degrelle was like, “Hey—those chicks are hot. Your racial theorizing cannot overrule the nads of the dudes in uniform.”

Race unreality is the NAACP in 2002 telling black actors, “Sacrifice jobs so that someone with skin color roughly approximating yours can get the paycheck you otherwise might’ve had.”

Racial loyalty can be a powerful factor when people make decisions in the abstract (“Vote for LaDantrelle Odom III: He’s good for black people!”). But when pitted against loins or wallets, it tends to be less of a pull.

Following the failed 2002 de-whitification, on-camera faces did become more “diverse,” but organically, through skill instead of race-based casting (by 2003, the L.A. Times, which had lamented the failure of the 2002 cleansing, was forced to concede that black actors were now “overrepresented” in Hollywood). The reason this was not greeted as good news by the race hustlers was that the 2002 “diversity push” was not actually intended to “diversify,” but rather eliminate white faces. Like everything labeled “diversity” these days, it was not pro-heterogeneity but antiwhite.

So the ethnic cleansers retreated, not to rue their folly but to bide their time. To wait for their next opening, and to learn from the errors of their last assault. And they got that opening when corporate America went batshit insane after a fentanyl freak was fatally winded in Minneapolis. The -steins, -bergs, -witzes, -thals, and “allies” saw their opening. Beginning last summer and culminating in codified industry-wide rules this year, Hollywood now has a pronounced cap on white casting. Amazon Studios set the numbers: no more than 30% white males on any project, no more than 30% white females, and that latter number must include trannies (dudes in wigs), so a good percentage of those “white females” are not females at all, because eliminating white female faces was always the ultimate goal in the effort to artificially influence traditional beauty standards.

Meanwhile, 40% of all casting must be black.

And this time the ethnic cleansing is working. I’ve done three casting gigs this year, and from speaking with hundreds of white actors, I can attest that at the moment they’re unemployable, while my black actor friends (fine actors all of them, and greatly deserving of employment) literally do not stop working, though by edict not skill (skilled though they are).

Why has the current aktion succeeded where the 2002 one failed? Because the left actually learned from its mistakes. Rather than forcing the industry to accept new, untested black actors (which upset established black actors who didn’t want the competition), the new generalplan simply caps white actors without artificially increasing the number of black ones. This has the full support of black actors already in the biz. No competition from new blacks, and competition from whites eliminated.

And rather than forcing casting directors to bypass agents and suffer the ignominy of inviting hobos into their offices, the white hiring cap allows agents to move the stock they already have (every talent agency has a few Leslie Joneses, who are essentially the “unmovable inventory” in the supermarket, the “canned plankton jizz” that never sells while the StarKist flies off the shelf). The white hiring cap and black hiring quota allows agents to profit from formerly unprofitable actors, while also letting them use the whites they already represent to fill the white roles that are still “allowed” under the new apartheid scheme. And casting directors only need to interview pre-vetted talent, never again having to mix with transients.

See what leftists did here? They learned. They found a new route to their goal that factored in human nature and the real-world dynamics of the system they were trying to influence.

Rightists should do that too.

The same dissociation that doomed the left’s 2002 Hollywood ethnic cleansing might potentially doom its current “open borders for all” crusade. The 2002 aktion failed because black actors (like all actors) have no racial loyalty, only self-interest. They did not want to compete with other blacks, or other “POCs.”

There’s no great mystery to the rightward turn regarding immigration among Southwestern Hispanics. The left’s border policy is based on the notion that browns have racial loyalty to other browns and POCs, so “of course” browns already in the U.S. will celebrate the flood of Third Worlders pouring in.

Here’s the left repeating its 2002 failure, on a much grander scale. Biden letting in a hundred thousand Haitian ooga-boogamen did not play well with American Hispanics. Far from having “POC loyalty,” Hispanics are far more likely than whites to not want to live among blacks.

And Mexicans are hardly fond of Hondurans, Salvadorans, and Guatemaltecans (the entire legal argument against Trump’s “remain in Mexico” policy was that Mexicans so hate these “brownies” that they risk life and limb by having to stay there).

So if you look at the polling data since Biden threw open the border, what you find is an emerging Hispanic-American majority in favor of sealing the damn thing, coupled with a desire to legalize the “dreamers” (mostly Mexicans) who’ve already been here for decades.

Okay, look at that data and don’t jump for joy (“Woo-hoo! They’re natchurrul Reepublicans!”) and don’t rend your garment (“They want amnesty? They’re dead to me!”). Understand the human nature behind the numbers—for U.S. Hispanics, self-interest tops “racial loyalty.” They don’t want to be flooded with competition for jobs, they don’t want blacks at all, but they also don’t want to see familiar longtime neighbors deported—and use it where you can (to at least build a coalition to seal the fucking border, and then sort out the “dreamer” bullshit afterwards).

When it came to banning white actors, the left got smart. It abandoned simplistic racial notions in favor of finding a way forward that went with the flow of human nature instead of against it, and made use of the system, instead of taking a hammer to it.

Do likewise. The next time you scan Netflix or Amazon Prime for something to watch and you see that every other program stars a bunch of Yaphet Kottos in drag, don’t get mad. Understand how it happened, and realize that those dynamics can be used for good as well as evil.