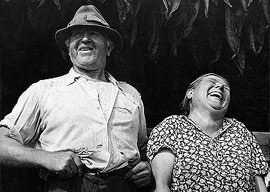 I mean, right—like, what the hell? [more laughter]

Like, I mean, we’ve told nothing BUT “white people” jokes for the past two generations while we’ve socially lynched anyone who tells jokes about all other groups, but why are white people still so thin-skinned that they can’t take a joke? [laughter, cont.]

And isn’t it a form of hilariously beautiful justice that they’re not having babies and are going to be wiped out over the next hundred years? [everyone laughs except one audience member, who shouts, “Hey, that sounds racist!”]

Ladies and gentlemen, we’ve found our Klansman in the audience! [audience roars with laughter, then begins physically attacking the “Klansman”]

Writer Chris Mohney is one of the goodwhites. Or so he would have you believe. It appears that by his own admission, Chris is Jewish, and therefore a recent article he wrote for NBC News in which he stoops to address other whites in his role as “a fellow white person” falls in line with a long tradition of Jewish people writing condescending open letters lecturing their “fellow white people” about their innate awfulness. Such essays have proliferated to the point where they’ve become a meme of their own. So if Chris is actually white, it’s with a strict qualification that tends to ameliorate much of the heavy, heavy guilt burden—he’s carrying a Jew Card in his wallet at all times.

I’m sure he’s fine with anti-Jewish jokes. Just kidding—that was a joke!

Mohney’s article was titled “Are ‘white people’ jokes racist? Let a fellow white person explain.” He acts as if he cares about his “fellow white people” and gently explains that anti-white jokes “can be a jarring experience if you’re not used to being made fun of.”

Not used to being made fun of? White people would probably have to go back to sometime in the mid-1960s to recall a time when they weren’t constantly being mocked. Young white people, especially, were born into a world where whites were the ONLY people it was OK to mock. Not only can one’s career be ruined by mocking nonwhites, one risks eternal social pariah status merely for pointing out the double standard. For those in media, mocking white people is a form of career advancement, as we all learned when The New York Times hired Sarah Jeong despite—or maybe because of—her history of saying virulently anti-white things.

“The problem isn’t that white people can’t take a joke—it’s that no one else can.”

But Chris Mohney, possibly aware that an outlet such as NBC News wouldn’t touch him if he dared note that the double standard is real and potentially dangerous, appears to be yet another zombie who’s gullibly swallowed the Zen koan that states “It’s impossible to be racist against white people.” He also seems to think it’s impossible for white people to have ever been slaves, as for some unknown reason he found a need to cite The New York Times’ effort to “debunk” the “myth” of Irish slaves, an effort which was subsequently stomped to death by me and Michael A. Hoffman III.

Mohney addresses the Sarah Jeong debacle as a way of further deriding thin-skinned, diaper-wearing whites who can’t take a light-hearted joke about their superficial characteristics that wasn’t mean-spirited at all and in fact was only a sly way of mocking how mean and abusive white people have been to others throughout history. He said that Jeong’s old tweets “make fun of white people in various ways,” yet he focuses on the ones about how white people sunburn easily and might have to live underground like goblins. The closest he comes to addressing Jeong’s more malignant tweets was when he cited the one about how she took joy in being cruel to old white men, but he deflects that by alleging that the only people who are legitimately cruel to old white men are “other old white men in government.”

He insists Jeong’s tweets were nothing more than a benign attempt to “superficially mock this or that alleged racial characteristic” like, say, a joke about big black lips or slanted Asian eyes might do, even though we all know it’s forbidden to mock gigantic black ape lips or tiny mail-slot Asian eyes that make them such bad drivers.

The tweets that Mohney sidesteps entirely are the ones where Jeong repeatedly says white people have “no culture,” that they invented nothing, that it was her “plan all along” for them to go extinct, and that she posted the hashtag #CancelWhitePeople.

He then dives into the extra-convenient role of mind-reader/gaslighter, claiming that he possesses the psychic powers to discern what white people REALLY mean when they dare to notice double standards:

White people, even though we don’t like to admit it, know that racism isn’t just about who you like or don’t like. Racism has always been and always will be about possessing, maintaining and applying power.

No, you dimwit, unlike you, we haven’t all swallowed that line of obviously fraudulent sophistry. If the word “racism” is to have any meaning at all, and if we even want to pretend we’re going to avoid a cultural civil war, we should keep the word confined to meaning what I was taught it meant when I was a kid—negative feelings or thoughts toward other races. From memory, there was no double standard for about, oh, eighteen months sometime in the mid-1970s, and since then, you can’t say a good word about white people or a bad word about anyone else without being socially and financially destroyed.

He further insists that it is ontologically impossible for certain white people to object to such jokes merely on the basis that there is a double standard that excuses them while forbidding all other manner of racist jokes:

You see that everywhere these days—self-appointed swamis claiming the insight to tell you what people really mean despite what they say. It’s a way of calling the person a liar while abdicating one’s responsibility to factually counteract what they actually said. If you see any writer claiming that someone’s statement is “really about” this or that, or that they “really mean this” when they actually said that, confront them about it. This sort of editorial reading of tea leaves has persisted for far too long.

But for the sake of argument, let’s say that some white people out there are anxious about losing power. OK, then—name one person in their right mind who feels good about losing power or wealth. Name anyone who isn’t a self-flagellating masochist who thinks it’s a good thing to experience a sharp diminution in wealth, power, resources, and numbers.

Would he have criticized the Comanche for fighting about a perceived loss of power? Would he have dumped on sub-Saharan Africans for objecting to European colonialism? Would he have told Jews in the Middle Ages to quit kvetching about all the pogroms? Not bloody likely—in this framework where whiteness is, was, and forever will be the only bad form of ethnic identity, it’s only whites who are commanded to celebrate a loss of power.

He also implies that Sarah Jeong’s tweets come from a lower position on this “pyramid” that has whites at the top. Again, that must be why Asians live longer and make far more money than white people in this white-supremacist society, yes? Hello?

He’s not listening. Chris says it is “literally impossible, by definition, to be racist against white people, or to tell a racist joke about a white person.”

That’s because you changed the definition a few years back while we were all asleep. If you had tried peddling that line of garbage back in the 1960s, the Civil Rights movement would have been squashed in under a minute.

The problem isn’t that white people can’t take a joke—it’s that no one else can.

Comedian Ari Shaffir is so unmistakably Jewish, his head looks like it was carved out of chopped liver. For years now he’s been doing a series of “Amazing Racist” videos which comprise some of the funniest racial humor of the past generation. He does things such as taking a Klan outfit to be laundered at a dry cleaner’s in South-Central LA, picking up Mexicans who are looking for day work and then dropping them off at the INS office, and using Scotch tape to hold open an Asian’s eyes while he’s driving.

While watching some of his videos recently, I noticed something telling—Shaffir is so egregious with the race-baiting, sometimes his black and Asian targets will physically attack him. What’s even more revealing is that they seem to feel it’s their highest moral duty to do so.

Meanwhile, if you’re white, it is considered the lowest form of moral leprosy merely to say, “Hey, can we apply these standards equally? I mean, this was supposed to be about equality, right?” You don’t even have to physically attack someone; you merely have to point out the double standard, and you’re another Automatic Nazi.

I don’t want fewer white-people jokes. I want more racial jokes across the board. I sincerely believe it’s the only way out of this suffocating insanity.