Letting the Air out of Michael Moore 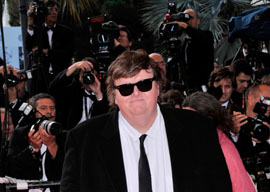 People weren’t as shocked by the news of Michael Moore’s pending divorce as they were at the thought of some poor woman marrying him in the first place.

The filmmaker-provocateur is almost a decade past his best-before date; his award-winning Fahrenheit 9/11 came out in 2004 and earned Moore millions of bucks and brand-name fame, not to mention the honor of sharing Jimmy Carter’s VIP box at the DNC.

While he may not provoke the same passionate hatred or admiration he once did, Moore remains familiar enough to merit headlines about his personal life.

That’s not just because his famously mendacious movies are still regularly presented to impressionable schoolchildren as balanced, well-researched “documentaries.” Michael Moore has been crafting his “schlumpy working man” persona since the 1980s. His wide-load girth, sneakers, and ball cap make him as instantly recognizable as a breakfast-cereal mascot.

“People weren”t as shocked by the news of Michael Moore’s pending divorce as they were at the thought of some poor woman marrying him in the first place.”

Critics have long argued that Moore’s self-consciously “ordinary” image is phony, and not only because the anti-capitalist campaigner has been rich and famous since the century began.

The trouble is, many of those critics presumably didn’t grow up in a union factory town like I did. They still cling to the fantasy”albeit one propagated by Moore and his fellow progressives”that the well-to-do look like the monocled “Monopoly” man, and factory workers are working-class instead of middle- (and sometimes upper-). In other words, “looking like Michael Moore” and “being well off” haven’t been contradictory for generations.

The fact is, the 59-year-old Moore never was that working-class guy from Flint, Michigan he persists in presenting to the public as recently as last week, when he tweeted from his pointedly named “@MMFlint” account:

The nativity gospel that underpins Moore’s entire personal mythology is like a gloss on that old Hellman/McCarthy feud: “Every word is a lie, including ‘working class’ and ‘Flint.’”

Yes, his family worked at GM but he grew up in the comfortable, all-white bedroom community of Davison. (His dad retired at 53; see “middle class,” above.) Moore lasted one day at his only assembly-line job.

But because even political sympathizers now acknowledge that Moore’s admittedly entertaining agitprop is often factually challenged, he has only his carefully (un)tended image on which to fall back. Not surprisingly, he can’t even keep his fibs straight.

Michael Moore has loudly denied owning stock, even though he has; his portfolio has included “Halliburton, Boeing, and HMOs,” all targets of his antiwar, Sicko wrath.