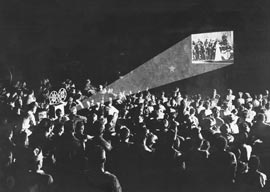 Next Tuesday marks the 100th anniversary of American movies as the premier pop cultural force on the planet. On March 3, 1915, director D.W. Griffith released The Birth of a Nation, an unprecedented epic about the Civil War and Reconstruction that commemorated the 50th anniversary of Appomattox and the assassination of Griffith’s hero, Abraham Lincoln. The first full-length movie to fully integrate the early silent era’s rapid advances in storytelling techniques, Birth of a Nation earned about $60 million at the box office”the equivalent of about $1.4 billion in current dollars, or twice what Avatar garnered in a vastly wealthier and more populous 21st-century America.

Griffith was the son of a Kentucky Confederate colonel; his theme of national reconciliation””The soul of Daniel Webster calling to America: Liberty and union, one and inseparable, now and forever””resounded with the American public during the Great War in Europe. While the Continent shredded itself, America was united and invulnerable, the once divisive issue of sovereignty resolved by the blood spilled a half-century before.

A little-noticed aspect of media power is the ability to decide what constitutes an anniversary and what doesn”t. Thus, the 100th birthday of Birth of a Nation went unmentioned at Sunday’s Academy Awards, despite the movie’s seemingly timely concern with the rape crisis of the late 1860s.

People have a difficult time avoiding either underreaction or overreaction to the threat of rape. It’s enormously shameful not to protect your womenfolk from rape, so dereliction of duty tends to incite fantasy and rage.

In 2014 alone, for example, we saw such bizarre manifestations as Heisman Trophy winner Jameis Winston leading Florida State, a deep Southern college bankrolled by conservative whites, to the national college football championship while university officials languidly investigated a white coed’s charge that he had raped her; the Rotherham Report finally rendered undeniable the long cover-up of Pakistani pimps raping some 1,400 adolescent English girls; and the Haven Monahan hysteria at the U. of Virginia.

College football coaches face powerful incentives to scrape the bottom of the behavioral barrel harder than their rivals in recruiting large violent men. Not surprisingly, this leads to numerous scandals involving white coeds accusing black athletes of rape, allegations that are frequently made to go away by the local power structure, helped along by the discomfort modern Americans feel over becoming aware of black-on-white rape. It’s unpleasant to notice because it’s so noticeable: according to federal statistics for 2001-2003, there were 15,400 cases of black-on-white single perpetrator rape versus 900 cases of white-on-black rape: a 17 to 1 ratio.

The systemic rapes of young English girls by Pakistani whoremasters were