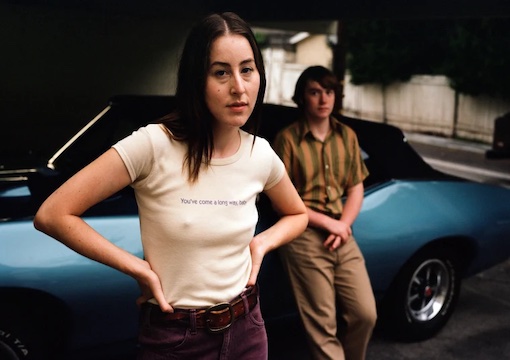 Paul Thomas Anderson’s critically acclaimed Licorice Pizza is his response to Quentin Tarantino’s similarly nostalgic Once Upon a Time…in Hollywood. As you may recall, I was a huge homer for Tarantino’s 2019 movie set in the Hollywood Hills and the adjoining suburban San Fernando Valley in 1969 because I was 11 then and thus appreciate Tarantino’s glamorized tour of old restaurants and drive-in movie theaters that I went to with my parents.

For sentimental reasons, I should be an even bigger fan of Anderson’s Licorice Pizza (named after a defunct Southern California record and video chain) because it’s about a 15-year-old Sherman Oaks boy in 1973, when I was a 15-year-old at school in Sherman Oaks. The movie even begins at Grant High School, the public school I would have attended if I’d not gone to a Catholic school.

“Licorice Pizza is a cheerful and mildly amusing screwball comedy. But the second coming of Once Upon a Time…in Hollywood it’s not.”

The Valley back then offered many opportunities for go-getters, while still being a cheap place to raise a family. Anderson’s new film visually emphasizes the colossal number of white kids who were getting free educations in the Los Angeles Unified School District back in 1973. (Today, less than 9 percent are white. But even then, diversity was our strength: My recollection from high school scuttlebutt is that Grant H.S. had the first of its annual Mexican vs. Armenian race riots in 1975.)

Anderson’s hero Gary, a child actor–turned–precocious waterbed entrepreneur (played by novice actor Cooper Hoffman, the teenage son of the late Philip Seymour Hoffman, who made five movies with the director), decides at first sight that he’s going to marry a twentysomething woman (singer Alana Haim in her first acting role as well) who works for the photographer taking the yearbook portraits.

Gary’s romantic ambitions are silly, but, with his full-grown size, self-confident salesman’s spiel, and Holden Caulfield-like delight in postwar adult rituals such as having his own regular table at the fading Tail o’ the Cock restaurant on Ventura Boulevard, they aren’t wholly absurd.

Gary and Alana’s chaste relationship never really goes anywhere as Alana sets her sights on more age-appropriate men, such as the former child star who played Gary’s older brother in Lucille Ball’s Yours, Mine, and Ours, an alcoholic William Holden (played well by Sean Penn, who is now as wrinkly as a shar-pei), and our neighborhood’s old liberal Republican Los Angeles city councilman and perpetual mayoral candidate Joel Wachs.

Indeed, Anderson’s final plot twist for his heroine is a local legend I first heard decades ago about the big sister of a friend in my Boy Scout troop and the highly personal extra duties she had to take on when she worked for Wachs, who was then viewed as the most puzzlingly eligible bachelor in local politics.

While Alana doesn’t take young Gary seriously as boyfriend material, she finds herself dragged into chauffeuring the burgeoning businessman around (because he’s too young to drive, even in the safety-unconscious 1970s) as he hops on the waterbed fad and uses inside information from the idealistic councilman to open the Valley’s first legalized pinball parlor.

The highlight of Licorice Pizza is Gary’s gang of underage workers delivering a waterbed to hairdresser–turned–Barbra Streisand’s boyfriend Jon Peters, played by Bradley Cooper as Jeffrey Epstein on cocaine.

The raw materials of Licorice Pizza are funny stories told to Anderson by Gary Goetzman (b. 1952), a child actor-turned-wheeler-dealer who wound up as Tom Hanks’ producing partner.

But there is also a lot of Anderson (b. 1970) in Gary. A friend’s parents were close to PTA when he was in high school (Buckley, Campbell Hall, and Montclair Prep) in the 1980s. My friend’s mother says, “Paul was the most ambitious boy we ever met” (and they had to deal with the high school Kevin Spacey hanging around the house, not to mention Jon Peters hitting on her). As a teen, Anderson would talk his way into meetings with studio executives who had gotten the impression that he was both an up-and-coming player in the industry and a grown-up.

Anderson is still an assiduous networker: Looking through the cast list of minor roles, I see two daughters of Steven Spielberg and the father of Leonardo DiCaprio. And his leading lady is the daughter of his favorite teacher at Buckley School.

It’s almost as if who you know matters. It will be interesting to see whether Zoom will allow talent from anywhere to flourish, or if geographic proximity will continue to play a huge role, as it did in the careers of Tarantino and Anderson.

In truth, the entrepreneurial Gary seems more like a teen from the Reagan 1980s, the era of the Billionaire Boys Club scandal at Harvard-Westlake (one of the few neighborhood prep schools that Anderson didn’t attend), rather than the more hippieish and indolent 1970s when few high school kids sold much besides dope.

To be a successful producer or director, it helps to be a born salesman, and to start selling young. Before Anderson had turned 30, he’d made two acclaimed movies set in the Valley, Boogie Nights and Magnolia. Since then, he has created the stately period pieces There Will Be Blood, The Master, and Phantom Thread, featuring stupendous actors such as Daniel Day-Lewis, Joaquin Phoenix, and the elder Hoffman.

The outcome of all this local history is that Licorice Pizza is a cheerful and mildly amusing screwball comedy. But the second coming of Once Upon a Time…in Hollywood it’s not. It’s currently wowing the audience in Westwood, just over the Hollywood Hills from Sherman Oaks. But I suspect that hometown excitement won’t be replicated when it goes into national release on Christmas Day.

As usual, Anderson elicits fine performances, even from his novice lead actors. But it’s not like having Tarantino write the perfect role for Brad Pitt, who looks like a leading man but is most comfortable as a sidekick (e.g., Ocean’s Eleven), so Tarantino invented for him the coolest sidekick role since Bruce Lee in The Green Hornet (even having him beat up Bruce).

Visually, Licorice Pizza is not as splendiferous, in part because Anderson’s $40 million budget was less than half of Tarantino’s. Moreover, for some reason, Anderson chose to depict the functionalist Valley realistically rather than glamorously. This vast bedroom community is famously lacking in noteworthy sights. (In Grand Theft Auto’s popular parody of Los Angeles, the Valley is simply left off the map of Los Santos.) And Anderson uses brown filters to imply the bad smog of 1973.

Finally, while Anderson is a gifted director, he should get himself a professional screenwriting partner. At least this time he got his incidents from a funny raconteur (some of his recent movies are less colorful than the actual events that inspired them), but after all these years he still can’t string together a plot. So Licorice Pizza just rambles along without much dramatic tension.

Also, Anderson’s script is too show-don’t-tell about obscure aspects of showbiz. For instance, if you watch carefully, you can see Anderson showing that Gary’s career as a child actor is suddenly over because he’s now a hulking young man, much the way that Anthony Michael Hall was a star as a weedy adolescent, but then matured into a strapping big adult who no longer looked much like his popular image.

But not many outsiders understand that producers want boy actors who look younger than their years because you don’t want to have an expensive business reliant on the maturity of a 10-year-old boy if you can find a 14-year-old who can play the part. (Cooper Hoffman is a rare teen male actor who looks older than he is, and it didn’t hurt his chances to get this role that he’s so reminiscent of his much-missed father.)

So, decades later we tend to wind up with weirdly boyish-looking leading men like DiCaprio. Why? Because they got their starts young as child actors in L.A. and by now are superbly well-practiced at their professions.

But Licorice Pizza could have used more on-the-nose expository dialogue in the manner that Once Upon a Time…in Hollywood opens with Al Pacino explaining in simple language to DiCaprio why his career is doomed.

Licorice Pizza would be better if it had come out first and then Once Upon a Time had topped it. But Anderson has always tagged a little behind Tarantino.