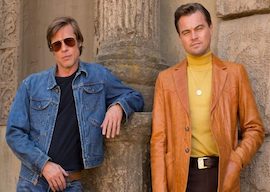 The stifling conformity of the Great Awokening has now driven even Quentin Tarantino to the subversive right. His immensely enjoyable buddy comedy Once Upon in a Time…in Hollywood, starring Leonardo DiCaprio and Brad Pitt at their considerable best, has The New Yorker fulminating that it’s “obscenely regressive.” Critic Richard Brody complains, “Tarantino delivers a ridiculously white movie” that “celebrates white-male stardom (and behind-the-scenes command).”

Tarantino enjoyed box office hits with Inglourious Basterds, in which Jewish-American commandos roast Hitler in a movie theater, and Django Unchained, which did something similar for slavery. Once Upon a Time carries on Tarantino’s tradition of changing history to a more crowd-pleasing ending.

Once is essentially a former little boy’s reworking of the Manson Family murders. Rather than the damn dirty hippies butchering lovely starlet Sharon Tate (played by Margot Robbie of I, Tonya as the quintessence of blond beauty), what if 6-year-old Quentin’s favorite TV cowboy (DiCaprio, playing a fictionalized composite of various 1960s stars) and his stunt double and sidekick (Pitt) happened to be next door and heroically saved the damsel in distress?

Once is, for a Tarantino movie, remarkably wholesome. It has a soft R rating for bad language and a few minutes of comic mayhem at the end. But it endorses the straight-shooting values of old black-and-white TV Westerns.

Tarantino could have disappeared down any one of the endless rabbit holes offered by the Manson case.

For example, prosecutor Vincent Bugliosi was much appreciated within the entertainment industry for portraying Manson as an LSD-crazed apocalyptic avenger. Bugliosi’s masterful job of making Manson seem like the ultimate outsider sidetracked the question of why a lowlife jailbird like Manson had become something of an insider at the best parties in the Hollywood Hills.

Without all the Helter Skelter stuff, Manson would seem less like the Antichrist and more like an ambitious pimp, an ex-con who was adept at chatting up runaway girls fresh off the Greyhound bus.

As Joan Didion pointed out in her clear-eyed report on San Francisco’s 1967 Summer of Love, Slouching Towards Bethlehem, the baby boom produced numerous broken families who generated many runaways. In turn, their favorite destination, California, attracted pimps and drug dealers from across America.

“Tarantino doesn’t let a complex plot get in the way of his indulging in the 1969ishness of it all.”

In Philip Marlowe detective novels, murder investigations tend to turn over a lot of rocks and shine embarrassing lights on what’s underneath. The Manson case could similarly have dented the reputations of numerous celebrities who had nothing to do with the killings, but who had plenty of other secrets they didn’t want exposed.

For example, Tate’s husband Roman Polanski, Hollywood’s hottest director, fingered John Phillips of the Mamas and the Papas as a possible killer because Polanski, like much of the entertainment industry, had been sleeping with Phillips’ wife Michelle.

Polanski’s suspicions later turned toward his own kung fu instructor Bruce Lee. (Lee is portrayed in the film as a pompous cult leader whom Pitt easily outfights.)

Of course, Polanski himself remains on the lam in Europe today for his 1977 rape of a 13-year-old girl.

But instead, Tarantino just doesn’t go there. He avoids most of the squalid side stories of the case. Manson to him simply serves as a boy’s version of the Evil Bad Guy.

As a fellow Southern California baby boomer, I luxuriated throughout Tarantino’s lavish reconstruction of what a boy in 1969 would have considered neat. The $90 million budget is extravagant for a story that mostly consists of two guys driving around L.A. listening to the Real Don Steele spin Top 40 hits by Paul Revere and the Raiders. (Actual grown men in 1969 would have listened to country, Sinatra, or, at most recent, Elvis, but the film represents Tarantino’s boyish version of 1969.)

Tarantino doesn’t waste his money, abundant as it is. The movie’s cars, for example, are terrific, as if my 1969 Hot Wheels collection had come back, full-sized. And some of Tarantino’s reconstructions of lost locales of my childhood such as the Van Nuys drive-in are a joy.

Longshoreman philosopher Eric Hoffer argued that in a movie intent on revivifying the past, a strong plot is a distraction because human motivations are too timeless.

Hoffer would have liked Once. Unlike Shane Black’s buddy comedy set in 1977 L.A., The Nice Guys, Tarantino doesn’t let a complex plot get in the way of his indulging in the 1969ishness of it all.

On the other hand, if you have less reason than I do to wax nostalgic over KHJ-AM Boss Radio or the Helm’s Bakery truck that Charles Manson is shown driving during his one cameo, well, you might wonder when Tarantino is finally going to get to the gore. The film is languidly paced and, while I found it hilarious, the rest of the audience only laughed occasionally.

Moreover, Tarantino, whose irresponsible 2012 hit Django Unchained espousing black gun violence likely contributed to the Great Awokening and the ensuing black-on-black murder binge, makes a 180-degree about-face in Once. Impressively, Tarantino’s new movie refuses to kowtow to any of today’s reigning dogmas about how awful white American men were in the bad old days of 1969.

My guess is that well-indoctrinated young people will find Once puzzling, if not unsettling. Why, they will wonder, are the heroes white men? Why don’t they at least have the basic decency to feel ashamed of their whiteness?

Twitter is currently mad that Margot Robbie doesn’t get many lines as starlet Sharon Tate. But the hoopla over the Bechdel Test overlooks that film is a visual medium. Robbie is memorable at being a young woman whose beauty and sweetness make life a little happier for everyone around her.

In contrast, the Manson girls, led by Dakota Fanning, Lena Dunham, and Andie MacDowell’s daughter Margaret Qualley, represent to Tarantino the sinister side of female susceptibility to propaganda.

The film, however, does indeed offer one strong female character: a slightly superhuman 8-year-old Method actress named Trudi Fraser (presumably modeled upon Jodie Foster, who demonstrated strong character to go along with her famous talents by standing up repeatedly for her friend Mel Gibson during his exile). She persuades a hung-over DiCaprio to give his all to his part as the villain on the obscure TV Western Lancer.

Most of Tarantino’s movies are, deep down, extended love letters to his favorite people on earth: middle-aged Hollywood tough guys. In Once he drops any attempt to come up with a fashionable political justification for his predilection, the way hating Nazis had served in Inglourious Basterds or hating white Southerners in Django.

Instead, Tarantino’s latest features two world-famous movie stars demonstrating why, indeed, they are famous. DiCaprio winningly portrays an insecure, voluble, emotionally needy actor who once starred as a taciturn cowboy on his own TV series but is now on a downward career arc. Pitt portrays his war-hero pal and stunt double, who is the world’s coolest guy, a Steve McQueen character come to life.

When he was 30, Pitt was a little too good-looking, but now he’s 55. Has anybody that age been as screen handsome since Cary Grant in North by Northwest?

(On the other hand, in a less charitable mood I could also imagine that Once Upon a Time started out with Tarantino deciding, perversely, that he wanted to get audiences to cheer horrific violence against pretty young women. But there aren’t all that many times in history in which attractive girls did something so horrible that they deserved what Tarantino’s depraved imagination can dream up for them… But wait, what about Manson’s murderous hippie chicks? Nobody would mind if they got flamed. Plus…bare feet!)

To Tarantino, 1969 isn’t the year of the moon landing or Woodstock or Earth Day or Women’s Lib or Gay Lib, it’s the last year of the Cowboy Era, when Hollywood made Butch Cassidy and the Sundance Kid, True Grit, and The Wild Bunch. Soon after, though, America lost its ancient hunger for Westerns, which had stretched all the way back to the Edison firm’s 1903 Great Train Robbery.

Is the ensuing New Improved America all that much better? Like the Coen brothers in their 2018 cowboy anthology, The Ballad of Buster Scruggs, Tarantino doesn’t seem convinced.