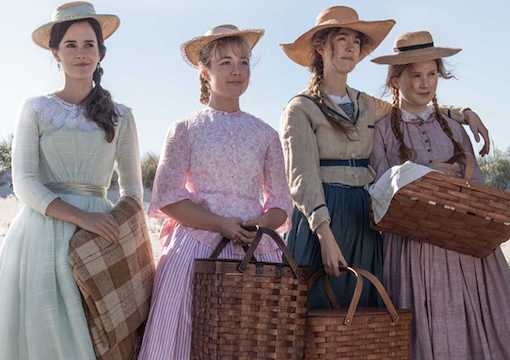 The umpteenth remake of Little Women, Louisa May Alcott’s witty 1868 girls’ novel about growing up in Concord, Massachusetts, during the Civil War, is directed by Greta Gerwig and stars her alter ego, the lovely Irish lass Saoirse Ronan, as Jo March.

As with the five sisters of Jane Austen’s 1813 book Pride and Prejudice, Little Women features four sisters, ages 12 to 16 at the beginning, living in genteel poverty, respectable enough to be invited to all the dances, but too broke to be the belles of the ball.

This reflected the remarkable upbringing of Louisa May Alcott (1832–1888). Back before Mark Twain, American literature was kind of a who-you-know business, and the Alcotts knew everybody who was anybody in the author industry. Ralph Waldo Emerson lent her family the money to buy their house in Concord, Henry David Thoreau told them it was haunted, and they eventually sold it to Nathaniel Hawthorne.

Considered a genius by America’s leading intellectuals, Louisa’s improvident father, Amos Bronson Alcott, was a figure out of a Mencius Moldbug essay about how WASPs are the real communists.

As Louisa recounted in her satire Transcendental Wild Oats, in the summer of 1841 her father founded a utopian commune called Fruitlands whose inmates were required to eat a vegan diet and not wear cotton (because it was picked by slaves), leather, or wool (because dumb brutes could not consent to be exploited). They could only wear linen, which was pleasant in summer, but not, as it turned out, in winter.

Nor could these animal rights activists employ beasts of burden to pull their plow. By December, with starvation held back only by Mrs. Alcott’s ceaseless labors, Mr. Alcott called the whole thing off.

Louisa was a more sensible soul than her father and enjoyed making money off her writing. So she eventually gave in when her publisher asked her to write a book for girls, even though she complained that she only identified with boys. In her semiautobiographical Little Women, the girls’ father is much improved upon by being rewritten as a beloved paterfamilias who is far away serving as a chaplain in the Union Army.

“You can always get funding for a production of Little Women, so it was sensible-sounding for the Gerwig-Ronan team to take on this property.”

In the new movie adaptation, the one reference to the true nature of Mr. Alcott is that when Papa finally comes home, he is played by the comic actor Bob Odenkirk of the absurdist Mr. Show. Personally, I’d pay to see Odenkirk portray Mr. Alcott in a biopic entitled Consecrated Crank.

Interestingly, when Little Women was first made into a talkie in 1933 during the culturally conservative Depression, it was seen not as a product of its radical milieu but as a return to traditional American family values after the Charleston-dancing ’20s.

A young force-of-nature Katharine Hepburn played Jo March, the stand-in for Louisa, as a bossy tomboy who brays:

I can’t get over my disappointment in not being a boy. And it’s worse than ever now, for I’m dying to go and fight with Papa. And I can only stay home and knit, like a poky old woman!

In the expertly done 1949 MGM color comedy adaptation starring June Allyson, it’s acidly emphasized that Jo doesn’t actually knit, since she views her freedom from female stereotypes as freedom from the female chores that she leaves to her sisters. (Most scenes in the 1949 version, by the way, are stolen by 17-year-old Elizabeth Taylor as a vain bombshell Amy.)

Post-Puritan progressivism of the kind endorsed by the Alcotts seemed to socially construct lesbianism. The term “Boston marriage” came to be applied to two feminist spinsters living together, as in Henry James’ novel The Bostonians.

I am more than half-persuaded that I am a man’s soul put by some freak of nature into a woman’s body…because I have fallen in love with so many pretty girls and never once the least bit with any man.

Today, Miss Alcott’s progressive parents would put her on puberty blockers to turn her into a little ex-woman. Back then, fortunately, tomboys were seen as normal.

The latest version of Little Women is not the first to be directed by a woman. The beautiful 1994 version with Winona Ryder as Jo was helmed by Gillian Armstrong. In the usually thankless role as Laurie, the practice boyfriend who lives next door, she cast the formidable Christian Bale.

In 2017, Gerwig made a likable autobiographical film about her high school years, Lady Bird, starring Ronan as herself. Gerwig was nominated for a Best Director Oscar, only the fifth woman ever and the first actress. (She played the ditzy alpha female in Whit Stillman’s delightful Damsels in Distress.)

Despite all the media pressure for more women directors, directing is still an Old Boys’ Club that bestows Oscar nominations mostly on women who studied under a top man in the field. Of the three women in this century to earn Best Director nods, Sofia Coppola learned from her father, Francis Ford Coppola; Kathryn Bigelow from her ex-husband, James Cameron; and Gerwig from her boyfriend Noah Baumbach, whose Marriage Story is up for Oscars this year as well.

While it’s common for leading men to evolve into strong directors (most recently Bradley Cooper with A Star Is Born), it’s rare for actresses to graduate to directing even though their screen careers are shorter. A large part of the job of directing is decisively persuading your crew that you know what you want and how to get it, which leading men are trained to be good at faking. But leading ladies tend to be selected for the force of their fluctuating feelings. As a Hollywood agent explains to Philip Marlowe in The Little Sister:

If these people didn’t live intense and rather disordered lives, if their emotions didn’t ride them too hard—well, they wouldn’t be able to catch those emotions in flight and imprint them on a few feet of celluloid…

You can always get funding for a production of Little Women (this is the third one in 24 months, following a BBC version in 2017 and a modern-day Mormon remake in 2018), so it was sensible-sounding for the Gerwig-Ronan team to take on this property.

The results, however, suggest that they weren’t well suited. Gerwig’s Little Women is a nice film, with spectacular landscapes through all four New England seasons, and with a visually lovely ending showing the manufacturing of the first copies of the book Little Women. Ronan, with her three Oscar nominations already by age 25, is of course a fine actress. And the scenes of one sister betraying another over Laurie are more dramatic than in the 1933 and 1949 editions.

But the new rendition of Little Women is not very funny. And if you aren’t already familiar with the plot, it’s rather a lot of work to follow what’s happening.

The main challenge in making a movie out of Little Women is to delineate the four sisters adequately so viewers can keep track of which one is which.

Fortunately, Alcott wrote her first chapter precisely so that her tween readers would get vivid impressions of each girl, both because the author wanted to emphasize female individuality and simply to keep the story comprehensible. Previous screenplays have succeeded merely by cribbing much of the dialogue from the book’s opening.

The key is to make Jo, the feminist main character, a spirited but slightly insufferable tomboy highly different from her sisters. But both Gerwig and Ronan are girly girls, and they don’t seem to identify with Jo as Alcott wrote her. So, they tone down Jo’s eccentricities and make her more of a conventional heroine. But that means that now there isn’t enough distinction between the personalities of the sisters for the audience to tell them apart for the first hour or so of the movie.

To add to the confusion, Gerwig as screenwriter chopped up Alcott’s straightforward plot into countless flashbacks. And Gerwig as director doesn’t come up with an adequate device to let you keep straight whether she’s showing you 1862 or 1868. I’m sure if I were an expert on women’s fashion of the 1860s, I could tell from the diameter of the hoop skirts exactly which year I’m seeing at any moment. But I’m not.

Finally, the director’s commitment to using realistic period lighting, such as candles, means that her characters’ faces are often dimly lit, making them even harder to tell apart.

In short, Gerwig has taken a story time-tested for clarity and made it as much effort to decipher as Inception or Eternal Sunshine of the Spotless Mind.