Louis Farrakhan Is Hilarious, So Leave Him Alone 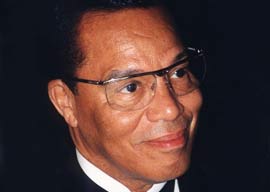 Last week the cancerously large social-media website Facebook and its narcissism-enabling photo-based subsidiary Instagram banned a group of high-profile individuals it deemed as “dangerous” and “violent.”

Now, smack me upside my bald-ass skull and call me Pappy Yokum, but maybe I missed the part where these unduly powerful media monopolies explained exactly why any of those they banned were even remotely dangerous, much less actively violent.

Some of them were also accused of being “extremists,” but I don’t want to talk about it because I’ll get a headache.

At this point everyone should be glumly resigned to the fact that for the foreseeable future until there’s some massive cultural or intergalactic upheaval, anyone who doesn’t kowtow to every last jot and tittle of leftist orthodoxy will be categorized as a dangerous and potentially violent extremist.

Most of those who suffered the ban-hammer—such as Alex “The Screamer” Jones, Paul Joseph “The Twink” Watson, Milo “The Fag” Yiannopoulos, and Laura “The Nose” Loomer—are rather bland and inoffensive controlled-opposition cardboard cutouts in the sense that they’ll attack sacred calves but never the real sacred cows. On the other hand, Jew-baiting businessman Paul Nehlen was also banned for the crime of suggesting that Jews have so much power that they can ban anyone who suggests they have a lot of power.

The only social-media excommunication from last week that both saddened and enraged me, though, was that of the Right Reverend Honorable Mister Minister Louis “The Charmer” Farrakhan. Louis Farrakhan is a national treasure, one of our greatest living entertainers, and the fact that Big Tech is banning him is really chafing my hide.

“Louis Farrakhan is a national treasure, one of our greatest living entertainers, and the fact that Big Tech is banning him is really chafing my hide.”

Minister Farrakhan has been providing me with laughter and enjoyment since I first learned of his existence sometime in the early 1980s. And I’m not alone—a recent poll has determined that by a 4-1 majority, Americans consider the Ridiculously Honorable High and Mighty Louis X. Walcott Farrakhan to be hilarious.

How funny is it that Farrakhan even had an Instagram account? Was it composed entirely of carefully filtered selfies? Were there snapshots of the bean pie he’d eaten for lunch? Or was it nonstop hate-porn collages of lynching victims? Why has the vampiric and—forgive me for stooping to use a word I vowed I’d never use—EVIL Mr. Marcus von Zuckerberg deprived me of the joy of knowing?

It has been suggested that Farrakhan was purged along with the others to deflect attention that most of the rest are known as “right-wingers,” whereas he is much harder to classify. There was even a lot of idiotic ideological ping-ponging as to whether or not Farrakhan can be classified as “right wing,” and that’s usually when I zone out because such discussions are ultimately a fruitless pursuit that only brings you one hour closer to your grave with nothing to show for it.

As far as being an ethnocentric traditionalist man of faith goes, Farrakhan’s probably the most “right wing” in the whole gang.

I’d wager he’s probably the only one who’s never done cocaine or paid for sex.

He’s definitely the only one who can play the fiddle better than Charlie Daniels.

There’s no doubt in my mind that he’s the only one who’s recorded transphobic calypso music.

Nor will I relent from my insistence that he is the only one who got banned last week who had received a personal visit via a UFO from the ghost of Elijah Muhammad while vacationing in Mexico. OK, scratch that—I think the same thing once happened to Alex Jones. Or maybe it was twice.

I suspect he’s the only one who published three books—which have all been banned by Amazon—alleging heavy Jewish involvement in the transatlantic enslavement of blacks. Just a hunch.

Since the Nation of Islam’s ideology was concocted by a decidedly non-black-looking hustler who called himself W. Fard Muhammad back in the 1930s, it has focused most of its high-octane and highly enjoyable racial hatred toward white people rather than Jews. One of the cult’s foundational tenets is that whites were “grafted” from blacks by a black scientist named Yakub some 6,000 years ago on the Greek island of Patmos. The NOI also teaches that a huge “Mother Plane,” AKA “Mother Wheel,” hovers above Earth, piloted by black youths who are poised to destroy the white man’s world the minute that Allah shouts, “Git ’er done!”

Farrakhan also once publicly speculated that his biological father—whom he never met—may have been Jewish.

Seriously, what’s not to love about ALL of this? Name one thing I’ve just told you that isn’t among the funniest things you’ve ever heard.

This cat is one of the most accomplished mind-fuckers in American history, and I’m glad to call him a fellow citizen.

Of course it bothers me that Big Tech has been aggressively stamping out ideas it finds unpalatable. But when it starts banning my favorite entertainers, it triggers a more deeply rooted animal rage within me. When you try to take away my laughter, you’re basically declaring war on my very soul.

Louis Farrakhan is 85, and he’s every bit as funny as Don Rickles, bless his dearly departed soul, was at 85.

These are all quotes straight from the Right Honorable Smiling Islamic Pastor’s mouth. It’s 100% hilarious and 0% scary:

White people deserve to die, and they know, so they think it’s us coming to do it.

And don’t you [Jews] forget, when it’s God who puts you in the ovens, it’s forever!

So when they talk about Farrakhan, call me a hater, you know they do, call me an anti-Semite–stop it! I’m anti-termite! I don’t know nothing about hating somebody because of their religious preference.

God don’t like men coming to men with lust in their hearts like you should go to a female.

How can you be a Jew and promote homosexual marriage?

Thoughtful white people know they are inferior to black people.

White people are potential humans [who] haven’t evolved yet.

White folks are going down. And Satan is going down. And Farrakhan, by God’s grace, has pulled the cover off of that Satanic Jew and I’m here to say your time is up, your world is through.

[L]et me tell you something, when you want something in this world, the Jew holds the door.

Why should there be an end to him (White man)? Because his nature is not in harmony with the nature of God.

White man was only given 6,000 years (6 days) to rule. You cannot deny he has ruled but on what principle did he rule? Righteousness? Truth? Justice? Fairness? I don’t think so.

Here the Jews don’t like Farrakhan and so they call me ‘Hitler.’ Well, that’s a good name. Hitler was a very great man. He wasn’t great for me as a Black man. but he was a great German and he rose Germany up from the ashes of her defeat by the united force of all of Europe and America after the First World War. Yet Hitler took Germany from the ashes and rose her up and made her the greatest fighting machine of the twentieth century, brothers and sisters, and even though Europe and America had deciphered the code that Hitler was using to speak to his chiefs of staff, they still had trouble defeating Hitler even after knowing his plans in advance.

Another method is disease infection through bio-weapons such as Ebola and AIDS, which are race targeting weapons. There is a weapon that can be put in a room where there are Black and White people, and it will kill only the Black and spare the White, because it is a genotype weapon that is designed for your genes, for your race, for your kind.

Death is sweeter than to continue to live and bury our children while the white folks give the killer hamburgers….Death is sweeter than watching us slaughter each other to the joy of a 400-year old enemy….So if the federal government will not intercede in our affairs, then we must rise up and kill those who kill us. Stalk them and kill them and let them feel the pain of death that we are feeling.

OK, that last bit was a little scary, but the rest is pure comic gold. Give the dude a break—he’s been working his craft for a long time. Even Jerry Lewis was scary every once in a while.