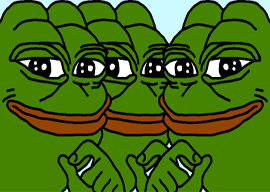 The alt-right is having a moment. Hillary is bringing them up in speeches and everyone is talking about the frog. However, just as they”re gaining mainstream attention, they appear to be attacking anyone remotely left of far, far right. This could be a way to ensure their side is represented fairly during their moment in the spotlight, or it could be a sinister form of self-sabotage spurred on by spies. I”m inclined to think it’s the latter because I”m from Canada where the government does this all the time. We don”t have white supremacists up north so the government creates them for us.

Back in the 1960s, the Canadian Nazi Party was basically one grumpy old man. He garnered tons of media attention and seemed to have a huge following, but that’s because he was funded by the Canadian Jewish Congress. They may have had infiltration in mind, but there was too much incentive to bust open a massive Nazi conglomerate so they had to spin it out of thin air.

“I”m sure there are bona fide bad guys in America today, but I can”t find any.”

This tradition continued well past the 1980s when CSIS (our FBI) paid private investigator Grant Bistow to infiltrate Canada’s far right. Only there still wasn”t one, so Grant and the government made it up. They started a group called Heritage Front and put out so much reasonable-sounding Nazi propaganda that a few angry teenagers thought, “These guys have a point,” and the next thing you know, Canada was chockablock with Nazi skinheads. I remember as a teenager in Ottawa, Ontario, wondering why the hell there were so many angry young men concerned with Jews and immigrants when we had about 37 Jews and the few immigrants we did have were eager to assimilate. Rajiv played hockey and all the black guys said “eh?” so the skinheads were left fighting other white guys who disagreed with them politically. This is exactly what we”re seeing today with not just the alt-right but the right in general. It’s white-on-white thoughtcrime.

I”m sure there are bona fide bad guys in America today, but I can”t find any. Every time I get face-to-face with someone in the SPLC’s “Extremist Files,” I meet a reasonable man with a philosophy that is, at the very least, arguable. Jared Taylor is from Japan and says the government should stop funding multiculturalism. Peter Brimelow is an immigrant who thinks immigration in America is a mess. John Derbyshire is a race mixer who loves Jews. Ann Coulter is smart and funny. I”ve known alt-right pioneer Richard Spencer since he got me the job at this magazine and even he, the head of the snake, comes across as perfectly reasonable in conversation. He doesn”t think nonwhites can be included in a harmonious America, but everything else on his plate is relatively civil. These are the bad guys the Antifa is warning us about? They sound like the mildest Black Lives Matter activist talking from the bath with a joint in his hand. In fact, the only real villain I can think of is Daily Stormer’s Andrew Anglin, but I”m telling you, this guy reeks to high hell of FBI. I can”t prove it, but my gut says he and Daily Stormer are government fabrications. The way they talk about Hitler all the time and use codes such as 14 and 88 just doesn”t seem like real people. I don”t think it’s a conspiracy theory to assume the FBI funds Daily Stormer. The CIA funded Ms. magazine. This hunch is furthered by their rampant anonymity. When I confront them on it they say they don”t need their lives ruined by some SJW on a rampage. This is usually said by someone with a Civil War soldier or a knight as an avatar on Twitter. They use men who died for what they believe in as symbols while they personally don”t believe in their views enough to be uncomfortable at work. It’s a cowardly act for a group whose main mantra is calling everyone else a coward. Sorry, but you can”t tell those of us who have been fired many times that we”re not brave enough.

The recent attacks on popular conservatives such as Milo Yiannopoulos, Steven Crowder, and Ben Shapiro are so vitriolic, they don”t seem real. Last week, a Florida talk on Milo Yiannopoulos” “Dangerous Faggot” tour was canceled due to what the FBI deemed a “credible threat.” The threat came about 24 hours after Anglin declared Milo a “deplorable kike“ and gave orders to attack. “We must fight,” he demanded in an anti-Milo manifesto about the tour. “You have your orders.” Does that sound like something Taylor or Spencer would ever say? I asked Milo if he was scared about all this and he said, “Mildly,” before adding, “Remember Dylann Roof used to read and comment at Daily Stormer. That’s one reason the FBI took it seriously.” We both agreed this all seems fake and Milo took it further by claiming he doesn”t think neo-Nazis really exist outside the internet. I contacted Richard Spencer about this crusade and he agreed that it’s “not helpful at all.” Spencer explained that the beef with Milo is that he’s taking up too much of the spotlight and including his homosexual decadence and love of black cock (among other things) with everything the alt-right has created. They don”t want Liberace showing up at the eleventh hour and grabbing the Academy Award for best performance in the war against political correctness. “The alt-right is about a lot more than simply terrorizing some social justice warriors. We”re about restoring white culture in America.” When the argument is presented with a modicum of rigor as Spencer does, it seems, if not reasonable, then certainly worthy of inclusion in the public discourse. “We need to go to his talks and engage him in debate,” Spencer says of Milo, “not shut him down.”