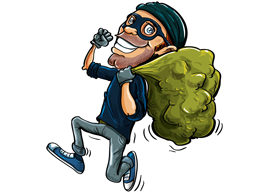 Months of egging on the mob in Ferguson, Missouri by the Obama Administration, the Democratic Party, and the national media in order to goose turnout in this month’s midterm elections have culminated in the Night of Undocumented Shopping.

An entire row of businesses on West Florissant Avenue, a major thoroughfare, was engulfed in flames. … Many business owners will return to their shops to see their livelihoods in ruins. Looters broke into a beauty supply store and stole hair weaves and wigs, leaving the heads of mannequins strewn in the middle of the street.

The executive branch, the Democrats, and the press had flogged the narrative of yet another white racist killer stalking baby black bodies to enrage low information potential voters. To their credit, large numbers of respectable black voters stayed home on election day, perhaps depressed that this latest media obsession over white male racist violence had once again turned out to be a factual fiasco.

“NYPD officers realized that you can”t get in trouble for abusing anybody’s civil rights while you are partaking of New York’s amazing abundance of sit-down food and beverage establishments.”

Just as in the farcical 2013 trial of “white Hispanic“ George Zimmerman, when the rule of law was finally applied to this tragedy, we found that the public had been relentlessly misled.

You and I have known since August 15 that the conventional wisdom about gentle giant Michael Brown being gunned down in cold racist blood was contrived. For over three months, we”ve been able to watch security camera video of the enormous black man setting off on his fatal crime spree by first roughing up the little Asian storekeeper from whom he was stealing cigars. Shortly afterward, Brown attacked the police officer in his own cop car and tried to grab his gun”behavior so far out of control that I”ve almost never heard of that happening before.

That doesn”t mean the policeman subsequently behaved impeccably. But that’s what you have laws to determine.

In 2010 I read a short police blotter item about a Drug Enforcement Agency officer fatally shooting an 18-year-old in a parking lot near my favorite Barnes & Noble bookstore. The spokes-cop implied that the lot was notoriously infested with drug dealers, which I knew to be false.

I started poking around in the official story and found it didn”t make much sense. I visited the parking lot exactly 168 hours after the killing to see if the news accounts were more plausible at that time of the week. While there, I saw a mournful middle-aged woman looking about. She was the dead man’s mother.

I told her to sue. Three years later, a judge awarded her family $3 million.

I”m proud to say that members of my family later participated in a protest march down the Ventura Boulevard sidewalk. But, you know, afterward they didn”t sack the Banana Republic or torch the Chipotle.

Nobody in Washington or New York subtly encouraged them to, either. You”ve probably never even heard of this particular law enforcement shooting. Why not? Because in a vast country, bad things happen every day. And the victim was white, so the case was of no use to the narrative molders.

In America, riots happen mostly when rioters know they, not the police, have the power structure’s sympathy. For example, 1960s race riots didn”t take place in the Jim Crow South, they took place in liberal northern cities, and not until after the passing of the 1964 Civil Rights Act. Similarly, the 1992 Rodney King riot in Los Angeles happened after a year of prestigious badgering of the LAPD by establishmentarians such as future Secretary of State Warren Christopher.

When cops feel that doing their jobs could get them in trouble, they tend to go spend their shifts in the doughnut shop. That’s what happened in New York City during the liberal Lindsay Administration (1965-1973). NYPD officers realized that you can”t get in trouble for abusing anybody’s civil rights while you are partaking of New York’s amazing abundance of sit-down food and beverage establishments. The least talked about way that Rudy Giuliani and William Bratton finally brought down the crime rate was to get the police out policing for more than half of their shifts again.