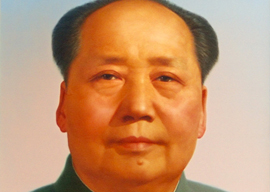 It is becoming a cliché that America is undergoing its own version of Chairman Mao’s Cultural Revolution.

Obama’s 2012 reelection strategy unleashed energies reminiscent of those that plagued China from 1966 through Mao’s death in 1976. The most obvious example is the current urge to topple statues of past American heroes, which is reminiscent of the countless attacks on Chinese cultural sites by youthful Red Guards, such as the ransacking of Confucius’ tomb in 1966.

The Cultural Revolution was largely perpetrated by young people told to feel oppressed by their country’s past. Social justice could be achieved only by the destruction of the weight of Chinese culture. Their slogan was “Smash the Four Olds”: old customs, culture, habits, and ideas.

But that’s not the only analogy between late-1960s China and 2018 America. One of the mainsprings of the Cultural Revolution was a vindictive aged actress out for revenge on the producers and actresses who had cost her roles back in her prime. Mrs. Mao, Jiang Qing, had been a movie starlet in 1930s Shanghai, when she built up a lifetime of grudges that she acted upon when her husband let her take control of Chinese popular culture in the 1960s.

Her squads beat up aging film figures and reedited old movies to conform to new political prejudices. She would have considered the recent American custom of terrified novelists hiring “sensitivity readers” to censor their manuscripts for them a step in the right direction.

“Like an American social justice jihadi, Mao believed that bad thoughts were the cause of bad realities.”

Mrs. Mao banned traditional operas, instead sponsoring eight model plays featuring heroic peasants battling demonic landlords. Her kind of simplistic division of the world into good guys and bad guys, whom you can tell apart just by looking at them, appeals as well to today’s youth, and those who want to manipulate them. As NYU psychologist Jonathan Haidt recently noted:

A funny thing happens, when you take young human beings, whose minds evolved for tribal warfare and us/them thinking, and you fill those minds full of binary dimensions. You tell them that one side in each binary is good and the other is bad. You turn on their ancient tribal circuits, preparing them for battle. Many students find it thrilling; it floods them with a sense of meaning and purpose.

As a friend pointed out to me last week, the Cultural Revolution was driven by the mounting evidence that the reigning ideology had failed. But, of course, that was impossible, so the only solution was to double down upon the ideology.

Indeed, Mao was the ultimate social constructionist. Like an American social justice jihadi, he believed that bad thoughts were the cause of bad realities. Like Hillary responding to the BLM massacre of Dallas policemen by saying, “We need to look more into implicit bias,” Mao demanded “thought reform.” Paul Johnson wrote in Modern Times:

…Stalin insisted in 1949, that Mao was not really a Marxist at all: “He doesn’t understand the most elementary Marxist truths.” While he used the Marxist formulations, and indeed considered himself a great Marxist thinker, much superior to Stalin’s contemptible successors, [Mao] never in practice attempted to apply objective Marxist analysis. He did not believe in “objective situations” at all. It was all in the mind: he might be described as a geopolitical Emile Coue who believed in “mind over matter.”

Likewise, while Obama’s election was supposed to heal America’s racial divides, it turned out that having Obama as president wasn’t making blacks earn more money or commit fewer crimes. Because the dominant ideology said that this racial inequality could only be due to subliminal systemic white racism being even more pervasive and powerful than progressives had imagined, Obama’s second term collapsed under black bad behavior, leading to the election of Trump. The Establishment’s response has largely been not to reconsider its thinking, but to double down on its most extremist theories, such as opening borders and prisons.

Beat down the reactionary bourgeois authorities! Sweep away all wicked devils and evil spirits! Do away with the Four Old Things: old thought, old culture, old customs, old habits. The Thought of Mao Zedong must rule and transform the spirit, until the power of the spirit transforms matter!

Four days later, Beijing notified local police forces to not enforce laws violated by Red Guards. Nazi-punching became the law of the land. National top cop Xie Fuzhi announced that it would be “no big deal” for Red Guards to beat “bad people” to death.

The death toll from violence during the 1966–68 peak of the Cultural Revolution was at least 400,000. That’s perhaps a couple of orders of magnitude greater than the number of incremental murders unleashed by the Ferguson Effect in the last two years of the Obama administration.

Another parallel to present-day America is that while Mao’s communist party colleagues let him run amok in the cultural sphere, they made sure he kept his hands off the economy, much as the way that Tim Cook and Mark Zuckerberg aren’t expected to submit to much government planning so long as they make the right noises on immigration and gay marriage.

A decade before the Cultural Revolution, Mao had destroyed the Chinese economy by collectivizing agricultural and telling each collective to build its own backyard steel furnace. China’s population has traditionally been close to its Malthusian ceiling, so Mao’s Great Leap Forward brought on a famine that may have killed tens of millions.

Mao’s colleagues then eased him out of management and encouraged him to go off and think deep thoughts about culture, while the careful premier Zhou Enlai was tasked with keeping agriculture and heavy industry running.

Strikingly, Mao more or less obeyed this division of power even when he made his return to the political scene from 1966 onward. Mao lacked a centralized secret police force like the KGB or Gestapo, so to regain power he had to stir up excitement among the youth. Despite the anarchy Mao unleashed in the cities, the economy kept bumping along, so this time China didn’t suffer a vast famine.

On the other hand, despite the similarities, America is not China.