Marching on Behalf of a Gangster 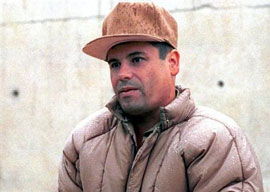 Last week, a crowd estimated at between 1,000 and 2,000 Mexicans marched and demonstrated in support of captured drug lord Joaquin “El Chapo” Guzman while chanting “release him” to the tunes of a brass band.

On Univision, an eyewitness said that demonstrators were crying and lamenting El Chapo’s arrest. (“Chapo” translates roughly as “Shorty.”) A protestor bore a sign that stated “Queremos Libre Chapo” (“We want Chapo free”). Do the Sinaloa protestors believe that Mexican President Nieto will free Chapo because of their ridiculous demonstration? What is their objective? Have they even thought of one?

“I feel a little spooked at what this portends for our future. We are without a doubt importing many individuals who hold such values.”

One sign read: “Joaquin Guzman gave us jobs, not like you corrupt politicians.” This is dumb on several levels. What type of job security can a drug lord offer you? And why do the Mexicans assume it is politicians” job to get them jobs? The Mexican people have legitimate gripes about their government and economy. But if Mexican immigrants to America feel entitled to government-made work, it does not bode well for those that would hope to limit the size of the American government.

This should give us pause. While it’s doubtful that El Chapo draws unanimous support in Mexico, it brings into question the values of people that advocate on behalf of a gangster. To what extent are we importing these values? To what extent does America already hold such pro-gangster values?

Sure, America celebrates gangsters”in a fashion. We love fictional characters such as Tony Soprano, Don Corleone, Tony Montana, and real-life outlaws such as Billy the Kid. (Guzman, like Billy the Kid, once escaped from jail.) But it is still disturbing that the college dorm rooms of students across the US display posters of a grimly scowling Al Pacino as Scarface.

I like to think we would not literally march in support of one of these fictional characters, so I remain nonplussed at the march in Mexico. But I feel a little spooked at what this portends for our future. We are without a doubt importing many individuals who hold such values.