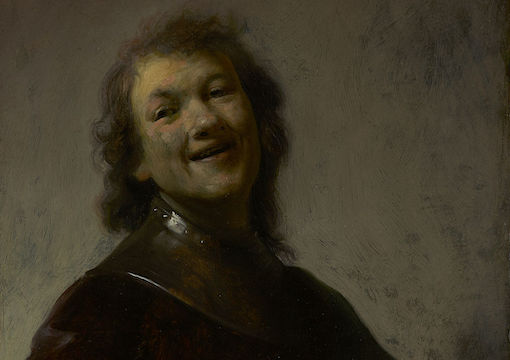 Rembrandt never left the Netherlands in his life, but the recent Rembrandt in Amsterdam exhibition at the National Gallery of Canada still managed to obsess, in the style of our times, over slavery, colonialism, and racism. The Ottawa museum announced, with a straight face:

The Dutch Republic of Rembrandt’s time had a very clear connection with the history of Turtle Island via contact between Indigenous peoples and Dutch settlers and through the legacy of the transatlantic slave trade.

Indeed, in the exhibition materials, it’s Turtle Island all the way down:

As they approach the exhibition space, visitors will walk through Longhouse of the Future, 2019, a glowing aluminum longhouse structure embraced by a five-row wampum belt wall design by artist Skawennati (Kanien’keha:ka and Italian-Canadian, lives and works in Tiohtia: ke [Montreal]), upon entry they will see a replica Two-Row Wampum Belt, 1992, by Cayuga Chief Jacob Ezra Thomas (1922–1998) loaned by the Woodland Cultural Centre of Six Nations of the Grand River, Ontario.

“Perhaps in the near future, art museums will stop displaying paintings by white artists like Rembrandt and instead just display texts of excuse and abuse.”

But, of course, as important as the First Nations of Turtle Island are to understanding Rembrandt in Amsterdam, blacks cannot be ignored either. As The Globe and Mail explains:

At the heart of the gallery’s new Rembrandt exhibition, half a dozen portraits of beautiful 17th-century ladies in black white-collar dresses confront a collection of everyday stainless steel teaspoons recently assembled by the Congolese-Canadian artist Moridja Kitenge Banza.

Granted, hanging up spoons in straight rows isn’t quite as impressive as the oeuvre of Rembrandt. But if we pretend hard enough, maybe it will seem as if it were?

The fundamental problem facing art museums in the Age of George Floyd is that history’s designated bad guys—white men—produced vastly more of history’s best art than did the official good guys, such as blacks and New World Indians.

To assuage the wounded amour propre of the presently privileged, the National Gallery put up a placard announcing that the historical shortage of Old Master paintings by blacks is the fault of white men:

WHAT COULD HAVE BEEN
Slavery and colonialism caused immense human suffering and loss of life. These practices also had other, less obvious repercussions. For instance, while artists flourished in cities such as Amsterdam during the era of slavery, producing a rich culture and leaving wonders to behold centuries later, the opportunity to do the same was stripped from the enslaved. Although Black subjects exist in European art from this period, few artworks were actually created by Black diasporic people during this time due to slavery and anti-Black racism. What might have been if chattel slavery had not taken place? How many “master” artists were lost during those centuries?

In reality, causality actually runs in the opposite direction: Without Europeans, no sub-Saharan would have become a master easel painter.

This is illustrated in the life of the part-black 17th-century painter Juan de Pareja, whose The Calling of St. Matthew has long hung in the Prado museum in Madrid. Pareja had been the slave assistant of Velasquez, who emancipated him and helped him on his subsequent career as an independent professional artist.

Interestingly, Velasquez’s Portrait of Juan de Pareja was, briefly, the most expensive painting in history when the Metropolitan in New York bought it for $5.6 million in 1970. It’s a superb work, but the then-stratospheric price also points out that the institutional demand for representations of diversity in art is over a half century old.

By the way, you’ll note that I refer to the fine painter Juan de Pareja by his full name but to the greats like Rembrandt and Velasquez by a single name. This convention is already causing apoplexy among au courant classical-music critics because it points out that all the forgotten black composers who have been suddenly added to concert programs aren’t, actually, famous. Slate demanded in 2020 that we “fullname” the greats to cover this up:

When we do return to the concert halls, let’s return to concerts that play Ludwig Beethoven [sic] alongside Florence Price, and Edmond Dédé alongside Johannes Brahms.

Of course, his full name isn’t “Ludwig Beethoven,” it is “Ludwig van Beethoven.”

But saying “Ludwig van” makes you come across like the sinister Alex in Burgess’ and Kubrick’s A Clockwork Orange. Likewise, “Wolfgang Amadeus Mozart” is even more awesome-sounding than “Mozart.”

As Theodore Dalrymple pointed out in Taki’s last month, the Tate Britain’s recent exhibit of the 18th-century English satirical painter Hogarth features some of the most monomaniacally Woke signage yet. First, the show comes with a trigger warning on the wall:

Hogarth actually painted a certain number of blacks, but he portrayed them as irreverently as his white subjects. And Rembrandt did one painting of sub-Saharans, with his usual empathy and respect. But those kinds of racial evenhandedness are suspect these days.

The text by a narcissistic black artist that accompanies a portrait of Hogarth sitting in a chair reads:

The chair is made of timbers shipped from the colonies, via routes which also shipped enslaved people. Could the chair also stand-in for all those unnamed black and brown people enabling the society that supports his vigorous creativity?

In a sign accompanying Hogarth’s Marriage A-la-Mode: 2. The Tête à Tête, an Asian pundit expresses her racial resentments and self-absorption:

Dissolute White people correspond with shiny white objects in this scene of domestic disarray. My eye moves from the mantelpiece’s crowd of Buddhist and Daoist Chinese porcelain figurines, to the china-loving Lady’s squinting, smiling appearance (elsewhere Hogarth wrote, a “little narrow Chinese eye suits a loving or laughing expression best”)…. However indirectly, in this painting the atrocities of Atlantic investments are invoked in relation to the outsized expenditures on Asian luxury goods—overall, a picture of White degeneracy.

Perhaps in the near future, art museums will stop displaying paintings by white artists like Rembrandt—after such knowledge, what forgiveness?—and instead just display texts of excuse and abuse.

In his 1975 book The Painted Word, Tom Wolfe lampooned the postwar dominance of critical verbiage over artistic talent in the New York art world by foreseeing a future in which the painters’ creations are reduced to the size of “wildlife stamps” to make room for the critics’ texts:

Up on the walls will be huge copy blocks, eight and a half by eleven feet each, presenting the protean passages of the period…a little “fuliginous flatness” here…a little “action painting” there…and some of that “all great art is about art” just beyond.

But the critical constructs of Greenberg, Rosenberg, and Steinberg were at least nominally about the paintings qua paintings.

Now, the art museum of the future will instead feature racist-free associations on the great theme of our age: why whites must pay.