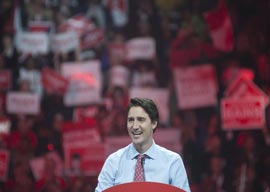 Hey, you Americans are thinking, are those the results from last night’s Canadian federal election? (That is, those Americans who aren”t thinking, “What election where now?”)

And the answer is:

“My eyes started welling up around the time the Ontario results started coming in. Forced to type this, they”re doing it again.”

As our own Gavin McInnes tweeted last night after I shudder to think how many drinks (and before a few more, I imagine):

WTF? Justin Trudeau is the Prime Minister of Canada!? He has Down Syndrome. What the fuck have you idiots done!?!?!!?

No, those percentages above were taken from a press release I got last week from a company called SeekingArrangment.com, “the world’s largest online-dating website that matches wealthy benefactors seeking “mutually beneficial relationships” with attractive members.” I was going to write this week’s column about their new “poll” finding that “Canadian Sugar Daddies commonly identify as Conservatives”:

The men on SeekingArrangement are some of the wealthiest in Canada, often operating their own businesses as CEOs. Sugar Daddies would be hard hit by Liberal proposed taxes, which may contribute to the nature of the results.

Surely, I thought, I could knead this fairly promising material into 800 or so entertaining and perhaps even thought-provoking words.

And I remain convinced that there’s still a joke in there somewhere. But”you”re way ahead of me”I”m having a hard time laughing, thinking, or even typing right now.

Due to the nature of My Real Job, I was obligated to stay up far past my usual toddler-worthy bedtime and stare at the river of Liberal red relentlessly washing over Canada like that elevator scene in The Shining.

It has been a couple of decades since I”ve endured a day like this one: being at work after getting little sleep, my fingers falling on all the wrong keys, unable to see straight, and, weirdly, freezing.

Except back then I”d have at least gotten myself into that condition after having what I kept trying to convince myself was something resembling “fun.” Last night was not fun. My eyes started welling up around the time the Ontario results started coming in. Forced to type this, they”re doing it again.

Proclaiming that we must “rethink elements as basic as space and time.”