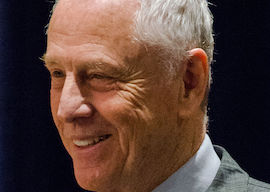 It’s widely assumed in thriller movies that if ever the truth is allowed to leak out about a powerful institution’s fundamental corruption, then its reputation must come crashing down once and for all.

But in real life, multiple disgraces can have negligible impact on an organization’s reputation in the prestige press as long as it continues to serve its function in furthering The Narrative.

I notice that among intelligent but naive young people of a scientific bent, there is a recurrent assumption that once the facts get out, then everything will change. If the 1887 Michelson-Morley experiment about the speed of light turns out negative, then the Newtonian model is shattered and eventually there must be a paradigm shift to Einsteinian relativity.

But that’s not the way it works in public affairs, where control of The Megaphone is what matters because most people can’t remember much. You have to repeat the facts over and over and over to have any chance of ever moving the needle.

For example, since the 1990s close observers of the Southern Poverty Law Center, one of America’s most profitable nonprofits (endowment in fiscal year 2018 was $471,000,000, up from $319,300,000 just two years earlier), have recognized that it is America’s most lucrative hate organization.

The SPLC’s legendary founder Morris Dees (currently on his sixth wife) is basically a sleazy Southern TV preacher type, but one who long ago figured out that poor Southern Baptists had less money to send him than rich Northern liberals. This junk-mail genius realized he could monetize the regional, ethnic, and class hatreds directed against his own people.

But isn’t it a little crass to whip up hatred of poor white Southerners among rich white Northerners? Morris had the perfect answer: He’s not the hater; it’s the people he hates who deserved to be hated because they are the haters.

This logic, such as it is, proved utterly convincing to the mainstream media, who anointed the SPLC as the grand arbiter of whom to hate. As the satirical Babylon Bee reported in 2018:

The SPLC suffered a disastrous March 2019 with three consecutive scandals exposing the SPLC, seemingly once and for all, as a clownishly transparent fund-raising operation that whips up hate for cash.

“The New York Times ran a dozen articles in August citing the Southern Poverty Law Center as the expert authority on who deserves to be hated.”

Yet, just a few months after all the bad publicity, there are no noticeable effects on how the wire services and The New York Times treat the SPLC as the objective authority on who are the Bad Guys you are obligated to hate. They simply assume most people won’t remember that the SPLC humiliated itself last March.

As you may recall, however, back in mid-March SPLC president Richard Cohen fired Dees for unspecified reasons, but which were rumored to be racism and sexism.

Cohen announced that Michelle Obama’s chief of staff Tina Tchen had been engaged to sniff out any remaining unwokeness in the organization.

But Cohen was soon out the door as well.

And within another week it turned out that it was Tchen who had made the phone call to Chicago DA Kim Foxx to tell her to let hate-hoaxing actor Jussie Smollett walk.

You might think that these events would leave the SPLC permanently tarred with adjectives such as “scandal-plagued” or at least “controversial.”

But no, a few months later, it’s as if the SPLC has a spotless history, at least judging from all twelve New York Times articles published in August that cite the SPLC.

Here are the dozen:

It’s not as if the SPLC has a financial interest in stoking hate hysteria, right?

The next Times article gave the SPLC the final word on freedom of speech: It is bad.

And if you can’t trust the SPLC to sum up, who can you trust?

And then there was this hilariously stupid brouhaha:

A Justice Department newsletter that is distributed to federal immigration judges and other employees contained a blog post this week from an extremist group that included an anti-Semitic reference, a national union for the judges said….

On Monday, the newsletter summarized and linked to a post from VDare, a website that regularly publishes white nationalists, according to the 440-member union, the National Association of Immigration Judges. The Southern Poverty Law Center classifies VDare as an anti-immigration hate website.

The VDare post described the Justice Department’s recent efforts to decertify the judges’ union. It published photographs of two judges, one of Iranian descent and one of Pakistani descent, and referred to them as “kritarch.”

Kritarch is another Greek term like oligarch. Kritarchy means “rule by judges.” Wikipedia lists historical examples, such as the Book of Judges in the Old Testament, ancient Ireland, the medieval Iceland beloved by libertarians, 16th-century Frisia, and modern Somalia. It is not anti-Semitic.

Earlier, The New York Times Magazine ran yet another long article about the Mounting Slavery Crisis of 2019 relying upon an SPLC operation to convince the gullible that what American students really need right now is more Slavery Literacy:

‘We are committing educational malpractice’: Why slavery is mistaught—and worse—in American schools

…In 2017, the Southern Poverty Law Center, a nonprofit organization that researches and monitors hate groups, pored over 12 popular U.S. history books and surveyed more than 1,700 social-studies teachers and 1,000 high-school seniors to understand how American slavery is taught and what is learned. The findings were disturbing: There was widespread slavery illiteracy among students.

Besides the Growing Slavery Emergency, there’s the White Supremacy at the Farmers’ Market Menace:

Amid the Kale and Corn, Fears of White Supremacy at the Farmers’ Market

…The rumors of white supremacy amid the stalls of clover honey and sweet corn left farmers and shoppers reeling…. Deep in the 200-page document was a 2018 F.B.I. interview in which Mr. Brewer briefly mentioned meeting with “Sarah and Douglas,” and reported that the woman had been posting as “Volkmom” on a chat board of Identity Evropa, which the Anti-Defamation League and the Southern Poverty Law Center call a white nationalist or white supremacist group….

And then there’s the NYT assisting in the SPLC’s mania for personally demonizing everyone, living or dead, who ever dared disagree with them:

THE NEW NATIVISTS: Why an Heiress Spent Her Fortune Trying to Keep Immigrants Out

The newspaper printed an elaborate graph sourced to the SPLC depicting how the late Cordelia Scaife May (1928–2005) funded Dees’ bête noire, the late John Tanton, the patriotic small-town eye doctor upon whom Morris appears to have projected his own guilty conscience.

Here’s the only sentence all August admitting that not everybody is wholly persuaded of the SPLC’s fairness and accuracy:

The Center for Immigration Studies sued the Southern Poverty Law Center for designating it a hate group, a label the law center has also applied to FAIR.

The above were all supposedly “News.” But here’s a rare piece actually labeled “Opinion”:

El Paso Was a Massacre Foretold

…Hate-group activity is on the rise, according to the Southern Poverty Law Center.

Now back to so-called News:

Tucker Carlson was amused by the transcript of NYT editor Dean Baquet explaining to his depressed minions that while their conspiracy to dump Trump by hyping the Russian conspiracy theory had disastrously cratered, the Times already had a new conspiracy theory ready to roll out: racism! Not surprisingly, the Times was not amused at Tucker’s laughing at their expense:

…Bob Hopkinson, a spokesman for the Southern Poverty Law Center, which tracks hate groups, said tracking membership numbers is “extremely difficult.”… Precise numbers aside, the center says hate crimes and hate groups are on the rise in America.

The El Paso Screed, and the Racist Doctrine Behind It

…The ideas espoused in the great replacement build on the most popular white supremacist talking point—the false notion that white people are at risk of genocide, said Heidi Beirich, the director of the Intelligence Project at the Southern Poverty Law Center.

Shootings Renew Debate Over How to Combat Domestic Terrorism

…David Neiwert, who has long reported on extremism in the Northwest and has worked with the Southern Poverty Law Center, said he sees the threat of the Northwest’s racist groups returning to levels of the 1980s, when neo-Nazi elements around the country had moved into the Northwest in a bid to create a white ethnostate.

Finally, here’s an article that makes the concession that the SPLC is “liberal.” That’s not exactly the first adjective I would use for the SPLC, which is in the racket of labeling other organizations hate groups so that they will be hated. But once in the month of August the NYT admitted that the SPLC has a point of view.

Along the way, Mr. Trump has empowered groups like the Federation for American Immigration Reform, which has been designated a hate group by the liberal Southern Poverty Law Center.

In summary, The New York Times ran a dozen articles in August citing the Southern Poverty Law Center as the expert authority on who deserves to be hated.

One of the twelve articles mentioned that the SPLC is “liberal,” while another one deigned to report that some of the hate groups singled out for hate by the SPLC disagreed with that attribution.

But the other ten articles admitted no question of the SPLC’s credentials.

And none of the dozen stories brought up the three scandals in March, much less the quarter century of investigative journalism revealing the dark side of the SPLC.

Just mentioning the SPLC’s many disgraces might lead to an undesirable chain of thought: “Are we the baddies?”

But we live in an age of intellectual inertia when what dominates is who has the biggest megaphone for shouting the loudest that they are the Good Guys and the people they hate are the Bad Guys.