Michelle Obama and Other Noble Sages 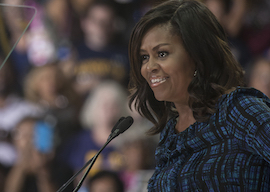 The Barclays Center in Brooklyn seats 19,000, and last Saturday it was packed with liberal idolaters eager to be enlightened by the great American sage Michelle Obama, who was there to promote her new book, Becoming.

The crowd wasn’t disappointed, for the belief that women can have equality both in the home and in the workplace is a “lie,” our previous First Lady informed them. “Marriage still ain’t equal, y’all,” she courageously opined.

“I just love how blunt she is!” exclaimed many in response, though why Obama didn’t address the wisdom of the Sex and the City lifestyle baffled the most educated women.

It wasn’t long before the combination of resentment and authentic vernacular sent everyone into a frenzy. Feminists snorted and stamped their feet like bulls in a fight. Their husbands and boyfriends swooned at the display, the men’s thoughts quickly shifting to the night’s upcoming masochistic enjoyments.

Then Obama showed just why diversity is our strength. “It’s not always enough to lean in, because that shit doesn’t work all the time,” she declared.

Alas, while her cursing showed the woman to be even more authentic, the reference to poor Sheryl Sandberg’s celebrated book, Lean In: Women, Work, and the Will to Lead, was alarming to the many Jewish persons in attendance, who began sending group texts to the Anti-Defamation League and the Jewish Defense League. “OMG, to think we thought she was one of the good ones!”

Yet with book sales in mind, Obama immediately got back on course. “I thought we were at home, y’all,” she explained, hurriedly picking up the sunflower seeds that had flown from her mouth. “I was gettin’ real comfortable up in here. All right, I’m back now. Sometimes that stuff doesn’t work.”

Gracious recovery! And Mr. Frum was quite relieved to learn that there was one less enemy of the people to worry about.

Across Wall Street, men are adopting controversial strategies for the #MeToo era and, in the process, making life even harder for women.

“Doubtless the same programs that enable men to overcome toxic masculinity can teach them to stop being so cowardly, too.”

Call it the Pence Effect, after U.S. Vice President Mike Pence, who has said he avoids dining alone with any woman other than his wife. In finance, the overarching impact can be, in essence, gender segregation.

Interviews with more than 30 senior executives suggest many are spooked by #MeToo and struggling to cope. “It’s creating a sense of walking on eggshells,” said David Bahnsen, a former managing director at Morgan Stanley who’s now an independent adviser overseeing more than $1.5 billion.

“Women are grasping for ideas on how to deal with it, because it is affecting our careers,” said Karen Elinski, president of the Financial Women’s Association and a senior vice president at Wells Fargo & Co. “It’s a real loss.”

“There aren’t enough women in senior positions to bring along the next generation all by themselves,” said Lisa Kaufman, chief executive officer of LaSalle Securities. “Advancement typically requires that someone at a senior level knows your work, gives you opportunities and is willing to champion you within the firm. It’s hard for a relationship like that to develop if the senior person is unwilling to spend one-on-one time with a more junior person.”

Men have to step up, she said, and “not let fear be a barrier.”

Wall Street will avail itself of the academy, let us hope, for doubtless the same programs that enable men to overcome toxic masculinity can teach them to stop being so cowardly, too.

The desire of men to protect themselves from false accusations of sexual harassment proves that Wall Street still has a long way to go when it comes to gender equality. What’s important, men must understand, is that for women there is a loss of “male mentors who can help them climb the ladder.” For a woman who cannot “climb the ladder” may have no reason to live, raising children being such an unfulfilling experience, although certainly some women must go on having them in order to keep up the supply of feminists. Therefore, men must check their privilege, drop their facts, and most of all, have more empathy.

Sad to say, for all their fine work, Tan and Porzecanski failed to mention racial bias in sexual-harassment allegations on Wall Street. Time and time again, you see, it’s Becky, not Bonita or Valentina, who gets hit on by lascivious males. This disparity produces racial inequalities in exorbitant out-of-court lawsuit settlements, without which a woman might have to marry a man to get his money—a terribly inefficient method.

Senators Harris, Gillibrand, and Hirono intend to introduce legislation to correct the evil. One can only applaud their noble endeavor, and yet, between sexual harassment in the workplace and the gender wage gap, the best solution already is clear: All male income must go directly to women, who can no longer be forced to work in so patriarchal a culture.

If anybody has it worse in America than women, it’s people of color. Will the injustices they endure never end? The latest concerns smoking. Says Aneri Pattani:

Black and Hispanic Americans are less likely to smoke cigarettes than white Americans. Yet once they’ve started, they’re more likely to stay hooked. National data show they successfully quit only about half as often as white smokers.

These communities often have less access to nicotine-replacement therapy and counseling that can help them quit. But experts say that’s only one piece of a much larger issue.

Black and Hispanic Americans, especially those with low income and education levels, often work or live in places without smoke-free laws, said Stella Bialous, an associate professor of social behavioral sciences at the University of California, San Francisco. Being around others who smoke makes it more difficult to quit.

Higher levels of stress experienced by these communities also can make them more likely to turn to cigarettes for the relief nicotine can offer, said David Williams, a public-health professor at Harvard University who studies racial health disparities.

Given such obstacles, what could help these smokers quit? The federal Patient-Centered Outcomes Research Institute has awarded $11 million to a team of researchers, led by the University of Pennsylvania, to answer that question.

The heartrending “racial health disparities,” let me add, are exacerbated by tax cuts for the wealthy.

I have friends in high places at the University of Pennsylvania, thanks to my essay on that horrible racist Amy Wax, who, despite admirable protests by Black Lives Matter and other local heroes, is still a law professor at that august institution. So, once I learned about this project—whose patronizing assumption that people of color are essentially without moral agency fills one with a distinctly progressive enthusiasm—I decided to ask my neighbor Shaquita whether she wanted to be a participant. “Nigga, please!” she replied, as though I weren’t a white devil, laughing and taking a deep drag of her Newport.

In such moments a journalist is most thankful for his diversity sensitivity training.

“But Shaquita,” I implored, while my compassionate nature fought back tears, “what about your health, and your eight children?”

Of course, there is no better use for $11 million, nor should you good team members have any doubts about the value of the project just because of one hardheaded woman.

A common myth is that paying for nicotine-replacement products will solve the problem, said Glantz, of UCSF. But studies show that gums and patches don’t work well without counseling. In fact, Glantz explained in a 2017 essay for the American Journal of Public Health, many patients end up using them in addition to cigarettes rather than as a replacement.

Counseling is crucial to address the underlying stress that drives people to smoke, said Williams, of Harvard. “You’re looking at a population with fewer alternatives to cope,” he said. “That makes it harder for them to give up that aid.”

The new study will not require patients to undergo counseling, though they can choose to pursue resources provided by clinicians.

While “the new study” is excellent news, considering how uniquely productive these “underserved populations” are, it must be said that there is an injustice here. People of color should be generously compensated for their valuable time, because while they’re receiving free “nicotine-replacement products,” free “counseling,” or other free “resources provided by clinicians,” they cannot possibly perform brain surgery, fly airplanes, or write scholarly articles on Hegel’s intellectual debt to Spinoza.

Then too, since people of color have “fewer alternatives to cope” with their “underlying stress,” is it really fair for them to quit smoking in the first place? Oh how the mind is overwhelmed by moral perplexity! People of color certainly have a right to smoke without their health suffering, as the advancement and preservation of this country requires that they live as long as possible. (I mention in passing that, for some reason, the phrase people of color never refers to Asians, who happen to be the most successful among us.)

But thankfully Providence, always dependable, has provided my genius with a solution: People of color shall participate in “the new study” and, given their special talents for committing crimes, violent ones especially, they shall be permitted to cope with living in white-supremacist America by treating white people any way they please. Thus, where Tyrone once blew off steam via cigarettes and Colt 45, he can now beat Edward to death, if he pleases, nor shall there be any legal consequences. (After all, the criminal justice system too is racist.)

The Weekly Standard is rumored to be shutting down at the end of the month, but having God and American exceptionalism on our side, we may trust that Bill Kristol and Stephen Hayes shall join forces with David French, Rich Lowry, and other eminent neoconservative moralists to ensure that divine violence against whites by people of color will be carried out as skillfully as our democratic nation building in the Middle East.