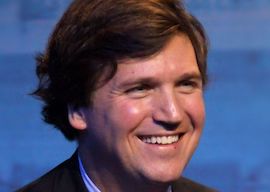 Once a neoconservative, Tucker Carlson is now a man of the right. Therefore, to use the president’s essential phrase, Carlson puts America first.

But there’s a price to pay for being the best conservative pundit on television. After all, so dumbed down, so decadent, and so suicidal is our culture that any public figure who advocates for the national good is sure to make lots of enemies—even among his fellow citizens. Carlson, moreover, has a huge platform, and with it a huge target on his back.

Thus, in January, Bill Kristol said of Carlson’s turn to the right: “It is close now to racism, white—I mean, I don’t know if it’s racism exactly—but ethno-nationalism of some kind.”

This vague, choppy language reflects the paltry character of Kristol’s mind. Carlson has never supported “ethno-nationalism,” let alone “racism,” nor does the fact that America has a white majority change this.

No matter for Kristol. To this warmongering dunce, it’s simply not possible to be a nationalist without being guilty of some terrible -ism.

And yet, ironically, such a reflexive, unthinking, irrational, unargued-for aversion to white people suggests that it’s Kristol himself who is the racist.

Like many people in the Trump administration, and like many Republicans in Congress, Carlson is often harassed in public. “I don’t feel threatened, but having someone scream, ‘F— you!’ at a restaurant—it just wrecks your meal,” Carlson said on a National Review podcast in October.

Carlson’s wife, Susan, was there alone. Hiding inside her pantry, she called the police while outside the mob screamed:

Tucker Carlson, we will fight! We know where you sleep at night!

No borders! No walls! No USA at all!

Ah, nihilism has never been so enthusiastic.

Every night you spread fear into our homes—fear of the other, fear of us, and fear of them. Each night you tell us we are not safe. Tonight you’re reminded that we have a voice. Tonight, we remind you that you are not safe either.

“The other,” “we have a voice,” the whining about not being “safe”—all this is sheer academic cant. Exposed to opinions they don’t like, Smash Racism DC is not “safe.” Time to attack!

These are the little monsters you’ve made, you emetic professors.

“There’s a price to pay for being the best conservative pundit on television.”

Afterward, Carlson told Fox, the snowflakes broke his oak door. One person was heard on a security video mentioning a pipe bomb.

“Here’s the problem—I have four children,” said a distraught Carlson. “I never thought twice about leaving them home alone, but this is the reaction because this group doesn’t like my TV show.”

According to Cassandra Fairbanks, “Someone affiliated with DC Antifa told The Gateway Pundit that the protest at Carlson’s home was ‘just the beginning.’”

That may be true, alas. Shortly after the incident at Carlson’s home, Smash Racism DC published his home address and that of his brother Buckley Carlson, as well as the addresses of Ann Coulter, The Daily Caller’s Neil Patel, and Fox’s Sean Hannity.

Here, then, is what our country has come to: Because a man supports border control—an obvious necessity that should transcend political differences—he is “racist.” So he must be harassed and run out of town.

On Twitter, Sebastian Gorka said the ugly truth: “This is on you Maxine Waters, Barack Obama, Hilary Clinton, Eric Holder. You incited this. And you will be responsible if it gets worse.”

It has never been so socially unacceptable to believe that mankind, on the whole, is simply not intelligent enough to make democracy work, although great philosophers and great statesmen have always thought so. Nevertheless, the events of our time suggest that the traditional elitist judgment is correct, and that, in keeping with the historical record, it’s only a matter of time before our democracy (such as it is) devolves into tyranny.

In “Federalist No. 10,” James Madison wrote:

Democracies have ever been spectacles of turbulence and contention; have ever been found incompatible with personal security, or the rights of property; and have in general been as short in their lives, as they have been violent in their deaths.

To be sure, the United States was meant to be a constitutional republic, not a democracy. But that is another story.

It should go without saying that opposing illegal immigration doesn’t entail racism or any other type of discrimination against the persons who are entering the country illegally. Just as it’s a crime to break into my home independent of the burglar’s race, so the millions of migrants who have entered our country illegally are criminals by definition, whether they are Mexican, Honduran, or whatever.

From a logical point of view, this is quite straightforward, mere common sense. The problem is that morality—a prerational endowment—usually is not rational or logical. Morality is largely a matter of willing intuitions in regard to things that may or may not be amenable to the endeavor.

In the case of the illegal-immigration issue, we see that people are simply unwilling to face a tragic either-or: us or them. Our own citizens or everybody else. We can’t have it both ways. There are not unlimited jobs in these States, especially for low-skill workers in an increasingly cognitive economy.

Still, since it’s painful to face this reality, people prefer to lie to themselves. Ignoring the incompatible values, they imply that America is not a country but a utopia.

Similarly, in their blind pity, people are unwilling to recognize that, even though migrants may be fleeing horrible circumstances, they are nonetheless criminals if they enter the country illegally. Our laws do not cease to be necessary just because of what’s going on in Mexico and Honduras.

Antifa, of course, believes America is “systemically racist,” and here too mankind’s tendency to delusion is a grave problem. Among human groups there are considerable inequalities with respect to mean intelligence. And though it’s much harder to quantify, observation suggests that it’s so with conscientiousness, too. Group inequalities—which do not in themselves evidence discrimination—are natural and here to stay (which is not to say fixed, as if they can’t change). So the left should stop insisting that they are merely owing to “racism,” “implicit bias,” “white supremacy,” and the like secular superstitions. After all, as technology advances and class becomes more and more determined by intelligence and conscientiousness, group inequalities are likely to increase.

I have been using the term “inequalities.” I could also say “differences.” Or “diversity”—which leftists only pretend to value. For they seem to believe that if one group, in aggregate, is less successful than another, then the less successful group is therefore inferior in some ultimate sense. This logic is much as though I were to determine my worth as a man by my social status as a writer. Although false, such delusional thinking is profoundly revealing, because in the background there is a crisis: namely, our time’s paucity of deep value. Insofar as family, religion, culture, and other significant sources of value are lacking, people turn to worldly distinction and other vanities to compensate.

This is a desperate affair. Ugly and divisive, too. People make much of equality. They speak all the right high-toned words. But all the while, it is envy that motivates them. And few things, it is vital to understand, are more dangerous than that most insidious of vices. Insofar as people’s perceptions and judgments are motivated and distorted by status envy, they will be inclined to punish others for mere differences.

Preserving our country and what is of value to us is essentially a matter of will. Do we have the will to take decisive action? That is the question, for, as we’ve seen, our enemies are not rational, so it’s vain to believe argument and debate are the answer here. Indeed, our enemies have made it clear that they have no interest in that vastly preferable approach.

In my Oct. 19 column, “What to Do About Antifa and Black Lives Matter,” I wrote:

Trump should have the principled resolve, whenever left-wing groups are disrupting and terrorizing citizens as they have done lately, to send in the National Guard, or do whatever else is necessary, to stop such evil. It is desirable for these left-wing groups to be subjected to state violence, lest they become only more insolent and dangerous. Enough empty speech—it is time for decisive action! Crush the enemy’s will and be indifferent to the subsequent criticism.

I suppose it’s this sort of thing that National Review editor Rich Lowry has in mind in thinking this web magazine is “rancid,” as he described it in a predictably inaccurate article on Gavin McInnes’ Proud Boys, published on Oct. 17 in the left-wing magazine Politico. (Don’t worry, loyal readers; I myself have no intention of writing for Jacobin; read me in Jacobite, rather.) Yet unhappily for that cowardly fraud, who never misses an opportunity to virtue-signal to the very left that despises him, human problems do not admit of a peaceful solution simply because we want them to do so.

So far, the Trump administration has largely failed on illegal immigration. As ever these days, the problem has been lack of will. Antifa, I believe, is going to get a lot worse. What we’ve seen so far is probably “just the beginning.” Whether our government will have the will to do what must be done regarding this evil is a good question.