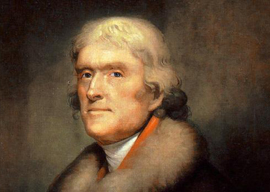 Every so often some clown decides to call Thomas Jefferson a “racist,” and other clowns let him publish the charge. The most recent clown is Paul Finkelman, a professor at Albany Law School, and the accessory clowns are The New York Times. Prof. Finkelman is shocked to find that Jefferson thought blacks were less intelligent than whites. And since Jefferson wrote the words “all men are created equal” but bought and sold slaves, that makes him “a creepy, brutal hypocrite.” Like all clowns of his kind, Prof. Finkelmen tells us Jefferson fathered children with his black slave, Sally Hemings.

In other words, it’s the usual rubbish.

James Callender, a transplanted Scotsman, started the Hemings rumor in September 1802 after Jefferson turned him down for a patronage job. Callender claimed the president was sporting with “dusky Sally,” a “wooly-headed concubine,” who was part of his “Congo harem.”

“By the wench Sally our president has had several children,” he wrote, later claiming that the total was five. Callender called Sally a “slut common as the pavement” who was “romping with half a dozen black fellows.”

“Jefferson’s reputation will survive, but that of The New York Times may not.””¨

Callender never claimed he met “dusky Sally” or explained how he got the dope on her rompings. The next year, Callender drowned in two or three feet of water in the James River, reportedly too drunk to fish himself out, but Jefferson’s Federalist enemies never stopped whooping up the Hemings story. Callender may have been right to claim he had done more damage to Jefferson’s reputation in five months than all his other critics had done in ten years. Deviants have cackled with joy ever since at the thought that Monticello was a love nest of miscegenation.

DNA testing on Sally Hemings’s descendants in 1998 proved that Jefferson was not the father of one of her older children, but that someone who had the Jefferson Y chromosome fathered her youngest child, Eston. The trouble is, there were 26 men of romping age who carried that chromosome and who could have been the father. This includes Randolph Jefferson and his sons, Thomas Jefferson’s nephews, and a number of other men in the Jefferson line. They were all of reproductive age and living in Virginia at the time of conception.

Was it Jefferson? Eston was conceived in 1807 when old Tom was 64, in bad health, and in his second term as president. The chances of the aging, ailing president shacking up with his slave under those circumstances are close to zero. But the Sally rumors had been circulating for five years and had already hurt him.

There are several likelier candidates, and the most likely is Jefferson’s younger brother Randolph, who was a 51-year-old widower. A former Jefferson slave named Isaac later wrote that “Old Master’s brother, Mass Randall, was a mighty simple man: used to come out among black people, play the fiddle and dance half the night””behavior that could easily lead to romping. Randolph later remarried and had more children, so we know he was a romper. No one ever claimed Thomas Jefferson socialized with slaves.

Any law-school professor has heard of “innocent until proven guilty.” At Albany there must be a new gloss on the doctrine to explain why it doesn”t apply to people who are dead and can”t defend themselves.