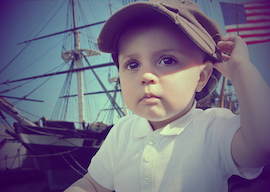 In her December 21 column in The New York Times, “None of Us Deserve Citizenship,” Michelle Alexander provides an example of the dangerously utopian thinking that characterizes many leftist arguments on immigration:

A radically more humane immigration system is not pie-in-the-sky, utopian dreaming. But it does require a certain measure of humility on the part of those of us who have benefited from birthright citizenship. Rather than viewing immigrants as seeking something that we, Americans, have a moral right to withhold from them, we ought to begin by acknowledging that none of us who were born here did anything to deserve our citizenship, and yet all of us—no matter where we were born—deserve compassion and basic human rights.

Throughout her column, Alexander repeats the accurate observation that “none of us who were born here did anything to deserve our citizenship,” and she seems confident that this constitutes a strong objection to people like me who take a hard line against illegal immigration. On the contrary, it does not. There is also a lesson here concerning the need to recognize natural human limits.

Of course, nobody who was born in America or any other nation ever did anything to deserve citizenship, because one must be alive in the first place to have done (A) to deserve (B). Nobody ever did anything to deserve to be born, either, so by Alexander’s lights, it’s a fair question whether life itself, like citizenship, isn’t intrinsically suspect in a moral sense. Alexander might respond, with her characteristic vagueness, that everyone has an inalienable right to life, but we need a lot more than that to determine who gets to be a citizen where.

As with citizenship and life itself, so with any number of things. I myself, for instance, don’t deserve to be 6 foot 3 with a high IQ, and yet I’ve undoubtedly benefited from these things in countless ways. Are those benefits moral evils in relation to those persons who aren’t as fortunate as I am? What about those who were born with what I lack? How can all these inequalities, or “privileges,” be put right?

As America continues to move leftward, it’s important to understand that Alexander’s reasoning is exceedingly dangerous. “On what moral grounds,” she asks, “can we deny others rights, privileges and opportunities that we did not earn ourselves?” But she doesn’t realize that, taken to its logical conclusion, this leads to tyranny. For so various are human beings that the only “solution” to the “problem” of undeserved goods must be absolute sameness of outcome. Even if, per impossible, everyone began “the race of life” the same, owing to their respective choices and the environmental contingencies they experience, people would still turn out differently from one another. Constant intervention would be necessary to “correct” those differences, and short of ensuring absolute sameness by life lived in test tubes, it’s difficult to see what could stop people from making the anxious value judgments that are always possible so long as they differ in any way whatsoever.

Instead of Alexander’s utopianism, I advocate a Burkean conception of citizenship. “Society is indeed a contract,” said Edmund Burke. “It is a partnership…. [And] as the ends of such a partnership cannot be obtained in many generations, it becomes a partnership not only between those who are living, but between those who are living, those who are dead, and those who are to be born.” An analogy to the nature of inheritance may help to illustrate the truth of this conception. Your children didn’t work to deserve that which you leave them (money, property, or whatever it may be), but they’re nonetheless the objects of your inheritance. You earned the goods which compose that inheritance, and having earned them, you deserve to leave them to your children, if you see fit.

It is similar with life and citizenship. These are goods—or gifts or blessings, if you like—that, though unearned, are granted at the discretion of the giver. Thus parents give to their children life and citizenship—carrying on “a partnership,” so to speak—somewhat as they bequeath a house or a collection of baseball cards. In these situations, to be sure, it is the giver, not the state, nor one’s neighbors, who is sovereign over the goods. For only he has earned (or rightfully inherited) them, or undertaken to bestow them, and the receiver’s legitimacy consists in the fact that she is the giver’s beneficiary. In a sense, citizenship, like life itself, is an inheritance, and needless to say, this doesn’t apply if one has entered a nation illegally, just as I cannot rightfully give to someone that which I stole from another.

Of course, this analogy goes only so far. There is such a thing as legitimate asylum, and there is something to be said for naturalization, too. (For example, I quite like David Goldman’s idea: We should recruit the most talented Chinese students in STEM and, once they’ve graduated and become citizens, use that talent to maintain a competitive edge over China.)

Writers like Alexander—well-meaning but superficial—never seem to reconcile their aversion to borders (or, in other words, to nations per se) with obvious practical problems. “All of us—no matter where we were born—deserve compassion and basic human rights,” writes Alexander in her moralistic vein. But how do we square this lofty belief with the reality that adding more low-skilled labor to a nation whose working class is already struggling is likely to keep wages down, and perhaps also lower them further? Indeed, as I have often remarked in my columns, the immigration issue is fundamentally tragic, but tragedy is something people in our time are too weak to face. They prefer sentimental rhetoric like the following, which is as easy as it is useless:

The founders of our nation did not merely wax poetic about the virtues of liberty; our nation was birthed by a Declaration of Independence, a document that insists that “all men are created equal” with “certain inalienable rights” including “life, liberty and the pursuit of happiness.” After centuries of struggle, including a Civil War, we now claim to understand that all people—not just propertied white men—are created equal with basic, inalienable human rights. If this is true, on what moral grounds can we greet immigrants with tear gas and lock them in for-profit detention camps, or build walls against the huddled masses yearning to breathe free?

The anthropologist Margaret Mead famously said, “Never doubt that a small group of thoughtful, committed citizens can change the world; indeed, it’s the only thing that ever has.” Today a relatively small group of courageous noncitizens—people like…the Dreamers and the thousands who joined the caravan—are challenging us to see immigrants not only as fully human, created equal, with certain inalienable rights but also morally entitled to far greater care, compassion and concern than we have managed to muster to date.

Here, as elsewhere, Alexander shows no sense of natural human limits. No matter about resources and economics and cultural compatibility; the state is to be as accommodating of immigrants as the moralist desires. Hence the Founders’ negative conception of rights (that is, “freedom from”) becomes a positive entitlement to universal citizenship and “to far greater care, compassion and concern than we have managed to muster to date.” An apt example, this, of what Alexander Hamilton called “artificial reasoning to vary the nature and obvious sense of words.” Yesterday’s prudence gives way to today’s delusion.

Wary of intellectuals, the shrewd Hamilton saw in them a tendency to follow “the treacherous phantoms of an ever craving and never to be satisfied spirit of innovation.” Their goal is progress, and yet often disaster is the result. For while the man of genius gets his nuanced views from acute perceptions of complex phenomena, the ordinary intellectual lives in a shallow world of empty word games. He is a chatterer, not a thinker. His opinions come from the books he’s read and from what he’s picked up, pell-mell, in his dealings with others in his milieu. And if anybody gains from those opinions, it’s generally he himself and those in his milieu, although others, and in particular the future, may suffer for it.