More From the Housewives, Please 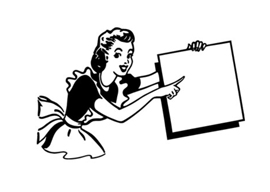 “Coming up next we have retired Air Force lieutenant general Tom McInerney, financial analyst Ross Gerber, and a housewife from Nebraska named Pam.” Why don”t we ever see that on the news? I”m serious. Housewives make up almost a third of American moms and that is a massive piece of the voting puzzle. After all, it was the female vote that got Obama elected. I”m not sure why so many of them voted for him. He thinks they”re losers. “Sometimes, someone, usually Mom, leaves the workplace to stay home with the kids,” he said in a Rhode Island speech last year, “and that’s not a choice we want Americans to make.” This isn”t an unusual sentiment. I’ve seen women who answer the “What do you do?” question with “I”m a stay-at-home mom” being met with looks of disappointment as if they had replied, “Nothing.” Top Manager in Charge of Ad Buying is just spending someone else’s money on something that probably doesn”t work, but it garners a helluva lot more respect than Creator of Human Life Who Then Shapes Said Lives. When Mitt Romney cited his stay-at-home spouse as an example of a housewife who cares about politics, a snarky “Democratic strategist“ insisted Ann had “never worked a day in her life.” The implication being, housewives are too stupid to understand economics. On the contrary, they are far more invested than Rachel Maddow.

“Modern feminism insists that women giving birth and sticking around is sexist but putting men’s shitty jobs on a pedestal is somehow feminist.”

Modern feminism insists that women giving birth and sticking around is sexist but putting men’s shitty jobs on a pedestal is somehow feminist. I don”t even know what a strategist is, but I”d rather hear strategies from someone who has literally created a future America than some barren spinster with no stakes in the game. Look at any mainstream media source and you will see women who have put career over family. Sometimes they have one kid. Sometimes they spent $30,000 on in vitro and have two. Even in those rare cases, you are looking at someone who has paid a Third World immigrant to look after their children like some sort of maternal security guard. Why are these people telling us what’s best for the country? They don”t even know what’s best for their own family. When I bring this up with professional women, they tell me a housewife’s life is parochial and boring. What these power moms don”t realize is America is made up of millions of tiny “boring” microcosms who shape the economy.

CBS doesn”t make its money from Super Bowl ads. They get rich from hundreds of thousands of regional commercials around the country. Dan Donnelly’s Cincinnati Ford may pay only $650 a pop, but when you combine all those local dealerships and restaurants and water parks, you have a good $14B in your pocket. America is made up of millions of little guys and the best way to make money is to pay them some respect. The same goes for politics.

That’s why we need to include housewives in the equation. I want them in aprons, too. Feminists will say wearing kitchen clothes and being on a first-name basis is demeaning, and that is because they”ve been brainwashed by Notorious RBG to think the kitchen is a jail cell. It’s not. An apron is a badge of honor. You don”t use it to get men fired or censored as childless women in the workforce seem so determined to do. You use it to create sustenance for the people you love. It’s a cape that’s on backwards. To be a “kept woman” means a man is keeping you”as opposed to throwing you away when you start looking old so he can go fuck someone else. Modern feminism is perfect for men because it’s all about getting the milk for free as they go from cow to cow.

Kept women have a lot to say about every issue in this campaign because microcosms matter. When we talk about immigration, Pam notices that teenagers don”t do odd jobs anymore. When she was young she”d see teenagers painting houses and trimming hedges. Now illegals do that and the kids stay at home playing videogames well into their late twenties. How are these kids going to be the next generation of entrepreneurs? We”ve robbed them of their economic libidos.