My God, What if He Loses? 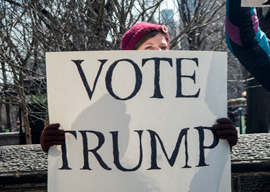 Last week was not a very good week for Donald Trump’s poll numbers. In fact, I had several Trump diehards”not bloggers or pundits, just private nobodies who are friends of mine”tell me that these days they find themselves thinking the once unthinkable: Trump might lose. Trump’s multiple recent statements speculating about the possibility of a loss have not helped soothe some of his followers” growing anxiety. With so many Trump supporters framing the election as the “last hope for Western civilization,” it’s not exactly encouraging to hear your man say, “It’s okay. I have a yacht and a mansion; I”ll be fine.”

Now, I know that some of you are thinking, “The polls are wrong, the polls are biased, the polls lie.” You keep thinking that. Because by all means don”t listen to those of us with a little more experience in these matters. I mean, for a lot of pro-Trumpers, especially those who come from the alt-right fringe, this is their first time feeling like an active participant in a national presidential election. As a longtime GOP party hack, I can tell you that the “lying polls” line is not something you want to fall for. In 2008, many GOPs had convinced themselves that the polls were not to be believed because Americans were being untruthful with pollsters, as no white person wanted to admit he wasn”t gonna vote for the black guy. “But wait till they get in the voting booth,” we smugly assured ourselves. “Then they”ll vote our way.” And we all know how that turned out.

The “lying polls” rationalization made an encore in 2012. I wrote about it in my book, as I recalled the events of an October 2012 Condi Rice banquet:

I was taken aside by Derek Broes. Broes had been a senior VP at Paramount, and senior director at Microsoft. By 2012, he ran his own consulting firm, and he was a contributor to Forbes. “It’s a lock, David,” he told me. “It’s going to be a Romney landslide.” He painstakingly explained the polling numbers and the context and meaning. “We can”t lose.”

So take some advice that I know you”re not going to take: Don”t buy the “lying polls” claim. Polls are imperfect, but generally they”re accurate. No pollster, even one who may be personally biased for or against a particular candidate, wants his name attached to a poll that predicts Dewey beating Truman. Personally biased as they may be, pollsters gotta eat too, and they know their job security depends on maintaining a record of reasonable accuracy.

“As a longtime GOP party hack, I can tell you that the “lying polls” line is not something you want to fall for.”

Trump supporters, and I don”t mean the casual ones, range from regular conservatives with experience in GOP politics who have found something of such incredible value in Trump’s message (primarily immigration) that it overshadows all the other stuff that really shouldn”t oughta be attracting conservatives, to the straight-out alt-rightists, the refugees from the fringe, who see in Trump the gruppenfÃ¼hrer of their dreams. This coalition has managed to completely disenfranchise the “establishment” conservatives”the GOP party apparatchiks, the National Review/RedState/Beck/Shapiro pundits and websites, and not just a few well-heeled donors. On that score, the pro-Trumpers deserve a hearty round of huzzahs. It was an impressive accomplishment, uprooting the foundation of a party and banishing damn near everything that had previously been seen as an essential element for a Republican victory.

Congrats. I mean that.

But here’s the thing…all those folks you”ve humiliated, they”re not dead. You know that, right? They might be sitting this one out, but they”re also sitting and stewing. And plotting. And waiting for their chance to retake the field. If Trump goes down, and, more to the point, if he goes down badly, with numbers so lopsided no sane human could conceivably cry “recount,” we”ll see the kind of vicious reprisals that occur every time a vanquished foe gets to retake lost ground and turn the tables on its former tormentors. Think in terms of the fate of French collaborators after the Nazis were routed. Think of my old friend John Sack’s book An Eye for an Eye: The Untold Story of Jewish Revenge Against Germans in 1945. Some people don”t like to lose, and some people are very unfamiliar with the term “gracious in victory.” The pro-Trumpers have taken a tremendous gamble, one that carries no exit strategy. They have to win, because if they don”t, the old guard will come back”energized, angry, and able to say “told you so””and a cleansing of massive proportions will ensue.

Are vocal and committed Trump supporters concerned about this? And about Trump’s lagging poll numbers? I thought I”d ask a few.

Until very recently, Margaret MacLennan was the director of Milo Yiannopoulos” infamous “Privilege Grant,” a snarky but apparently seriously-intended scholarship program for “white men who wish to pursue their post-secondary education on equal footing with their female, queer and ethnic minority classmates.” The preternaturally beautiful MacLennan won”t tell me why she and Milo split, but my guess is that he could no longer bear to be around a prettier blonde. Apart from her work with Yiannopoulos, MacLennan is best known for her series of anti-SJW viral videos, each of which is definitely worth a look.

Matt Forney is no stranger to Taki’s readers, having penned several pieces for Takimag in recent years. Slate describes him as a “far-right journalist and internet personality…whose work sits at the intersection of racism and men’s rights activism.” Of course, to Slate, pretty much everyone’s a racist. At least everyone who’s white.

Publicly, Edwin Oslan calls himself a “Trump-supporting, alt-right, punk rock Jew,” although privately he confides that he’s more of a “free speech libertarian” who generally likes the alt-right…but not all of it (he explains himself rather well in this post on his very entertaining site, Savage Hippie). Oslan accompanied Forney to the RNC last month to raise a little hell, and it’s not without some measure of pride that I found my name being used to tar both of these gentlemen as monsters (Forney was attacked by Media Matters for associating with a radio show that once posted one of my videos, and Oslan was slammed by the loons at One People’s Project for having me as a guest on his podcast. Typically sloppy leftist journalism…I”m actually one of the cohosts).

I asked these three Trump supporters a couple of questions that had been gnawing at me following their candidate’s not-at-all-excellent week. The obvious first question being, with less than three months to go, do they still think he can win?

“I”m confident that Trump can win because we on the Trump-supporting right are working on a handshake agreement to leave infighting at the door until after the election,” responds MacLennan. “Trump is the free speech candidate and he’s in a constant state of just getting started.” Forney agrees: “Barring massive electoral fraud, Trump is going to win in a landslide. It’s sufficiently early enough in the race that polls are limited in their usefulness. For example, Ronald Reagan spent most of his 1980 campaign trailing Jimmy Carter or running neck-and-neck with him, and didn”t decisively pull ahead until after their debate. Between Hillary’s health problems, her comparative lack of charisma, and the massive fissure between her and Bernie Sanders” supporters, I”d be surprised if he gets fewer than 400 electoral votes.”