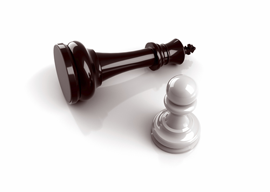 Is there any way out of this wretched cycle? Any hope for an end of it? Any solution? Well, I”ve heard a few suggestions.

It’s much better for the white community, but also the black community, to be able to peacefully separate … No-one gets more resources than another. It’s a fair separation. And what that would do is, incidents of police brutality, the industrial prison system, which primarily affects black males, that wouldn”t be a problem any more, because the black community would be able to have its own prison system, its own police, its own justice system.

The ideal I advocate is the creation of a White Ethno-State on the North American continent.

I know both these guys: Richard’s been a personal friend for some years. I have to say, though, I find separatism hard to take seriously.

“The problem with separatism is that blacks would be nuts to want it.”

Matthews’s view is the more naÃ¯ve of the two, unless he’s being disingenuous. What would be the condition of blacks post-separation? The odds are: not good.

Blacks have created viable nations: Barbados, Botswana, and Ghana get good press, for example. These are exceptions, though; and Barbados, the best of the bunch, with a tiny population (same as Newark’s) and flourishing tourist and offshore-banking enterprises, still only manages a South European level of prosperity (with a distinctly non-European homicide rate). Most black nations are fragile and very poor. Black populations simply don”t have enough of a smart fraction.

Assuming that the white ethnostate will be sharing North America with one or more black ethnostates, the latter will be poor and dysfunctional, certainly more so than their white neighbors. Imagine a midrange black-African state next to a midrange European state: say, Uganda (2013 GDP per capita $1,500) abutting Belgium ($37,800).  I see major issues of border control.

The problem with separatism is that blacks would be nuts to want it. With all the real or imagined indignities of minority status, life is far better for them in a white nation.

That’s cute, but it suffers from the same problem as before: relentless pressure on the borders of the WSS and IUSA from blacks desperate to escape the poverty and disorder of the BSS. So separatism looks like a no-hoper.

There’s a bit more to be said than that. Richard Spencer, for example, has his eyes fixed on the far future (“It would be a state for the 21st century”or 22nd …”) and seeks only to plant the idea of a white ethnostate, taking 19th-century Zionism as his model. This century’s absurdity may be the next century’s popular cause, he”d say.

I suppose it might. After all, there have been cases of the converse being true. There was, for example …

Repatriation.  In my grandfathers” grandfathers” time, the idea of sending American blacks back to Africa was hugely popular with elite whites. Abraham Lincoln was friendly to “colonization” schemes, and appointed a commissioner of emigration to implement them.

The problem was that very few blacks wanted to be repatriated.

Yet despite their leaders” support for colonization, the common [black] people [of Philadelphia] unequivocally rejected the notion.

Blacks didn”t see why they should uproot themselves and move to a distant continent just for the convenience of white people. They especially didn”t see it in the 1860s, when a dramatic improvement in their condition seemed to be just over the horizon.

Of the era’s four million American blacks, only 15,000 signed up for colonization. If they”d known how Liberia would turn out, the number would have been even smaller.