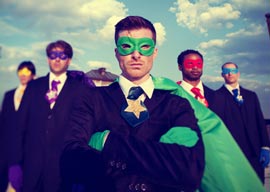 We just finished hosting Comic Con here in NYC and the streets were filled with grown-up children dressed as superheroes and characters from kids” shows. I”m not talking about a dad dressed as Batman because his kid was dressed like that too. There were no kids. Comic Con is for adults now. Eventbrite surveyed 2,600 fans and listed 0% under 13. The vast majority was between 30 and 49.

As a parent trying to give my children a childhood, I find this co-opting of their culture infuriating. In my home, we celebrate “Cartoon Morning” on Saturdays because it’s one of the fondest memories of my own childhood. Looking back, I realize the cartoons we had back then sucked pretty bad. The best it got was Wacky Races, which was just a race between different cartoon characters sabotaging one another. There was no plot. The quality of cartoons today is incredible. The two top broadcasters, Cartoon Network and Nickelodeon, host mind-blowing, quality shows such as Adventure Time, Regular Show, Clarence, We Bare Bears, The Amazing World of Gumball, Uncle Grandpa, Sanjay and Craig, and of course, Pig Goat Banana Cricket. I”d never watch these on my own, but I believe it’s healthy to watch these shows with your kids because it forges a bond and you often need to explain the story to the younger ones. The problem is, these shows don”t air on Saturday mornings. One of the reasons they”re so good is that they”re not made for kids. They”re made for adults. My kids” favorite, Sanjay and Craig, airs new episodes at 8:15 p.m. on Fridays and 10:45 Saturday mornings. Kids get up at 7 a.m. They”re bored of cartoons by then. These shows must be adhering to the sleep patterns of grown-ups. When you turn on the TV at 7 a.m. on Saturdays, Nickelodeon is showing a SpongeBob SquarePants marathon and Cartoon Network is doing the same with a terrible show called Teen Titans. That’s the kind of thing on at three in the morning on a Tuesday. Saturday-morning cartoons are officially over.

“My vices are bourbon and yelling at strangers, not round drawings of 5-year-old girls.”

This eradication of kid culture isn”t just on TV. I went to the New Era store to get my 7-year-old son a baseball hat. He was stunned by the selection. Not only did they have a huge assortment of Fantastic Four hats, they had each character as a baby. That’s right. We are now infantilizing cartoon characters. You can get baby Thing, baby Thor, or the increasingly popular baby Darth Vader. I had to remind my son he could get only one, but before he could choose, the salesman informed us we were in the adult section. None of the hats we were looking at came in kid sizes! We were directed to the children’s section of the store, which was a tenth the size and featured really lame hats like the one that has every major-league baseball team on the same hat (what does that mean, I enjoy sports?). He didn”t like any of the kid ones available so we walked past row upon row of baby superheroes and out of the store.

My brother-in-law gave my kids a gift that could have cheered my son up. It was a Batman videogame, but when I put it in the Xbox I was shocked to see the game involved breaking out of prison by bludgeoning other prisoners to death. Then I check the box and see it’s rated M for mature. Pretending you”re Batman is the exact opposite of mature. When I point this out to “gamers” their indignation is shocking. They bring up that games now gross more than all Hollywood movies combined and the average videogame player is 31 years old. Yeah, that’s my problem. Pretending you”re a superhero shouldn”t make more money than movies, and no, you shouldn”t be playing superhero at 31. Those characters were invented for little kids who got bullied at school. Hey, sad little kid with his underwear yanked up his ass, if you”re too scared to punch a bully in the nose, here’s a story about a nerd like you named Clark Kent. He has to hide the fact that he could easily kick the ass of every bully in the world. It’s a fantasy for preadolescent bookworms.

Superheroes are so adult now, parents complain when they”re rated PG-13. Kids are no longer invited to the party. When I was a kid, I used to read Flash comics. I remember the letters page would inevitably have some old nerd saying, “Excuse me but if he was running fast enough to float along falling rocks, he would have broken the sound barriers so how did they not hear blah blah blah.” The editor’s response was often a sarcastic quip such as “Uh, I guess because it’s just a comic book?” I remember at the age of 9 or 10 being disturbed by adults writing in to my comic book and pointing out adult things about my favorite superhero. Today that wouldn”t be my comic book at all. It would be his, and his question would be respectfully answered. They probably have consultants now to double-check the physics of a guy who became fast when lightning struck a bunch of chemicals.