Nonwhites Can”t Be Racist Cuz My Teacher Told Me So 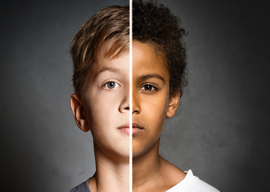 Although it was released over three years ago, there were audible sounds of indigestion online recently at the discovery of a textbook called Is Everyone Really Equal?: An Introduction to Key Concepts in Social Justice Education. The book is intended for all students of high school age and above. From a cursory glance of the book’s advertising materials, it appears to be roughly as full of shit as its title would imply.

At issue recently was this specific passage:

There is no such thing as reverse racism or reverse sexism (or the reverse of any form of oppression). While women can be just as prejudiced as men, women cannot be “just as sexist as men” because they do not hold political, economic, and institutional power.

Some would agree that there is indeed no such thing as “reverse racism,” but they”d argue so for different reasons than the authors. They”d say racism is racism no matter who’s practicing it. Unlike the authors of Is Everyone Really Equal?, at least they”re being consistent.

But sensible citizens such as you and I realize that the voodoo term “racism” is purely a social construct and thus has no innate meaning. That’s why different groups are always fighting one another to define it. The ability to define words is the root of cultural power. In my lifetime, the word’s definition has expanded with the ravenousness of a malignant tumor. Nowadays, everything white is racist. Even pointing that out is racist. And it’s racist of me for making fun of the fact that pointing this out is racist. And every word I keep saying from hereon out merely compounds the racism.

“The ability to define words is the root of cultural power.”

Will this tired conga beat never end? “Nonwhites cannot be racist” is a transparently nonsensical statement. It’s a freeze-dried and vacuum-sealed bag of pure bullshit, one of those innately fraudulent Newspeak mantras that bother me more every time I hear them”you know, obvious lies such as “alcoholism is a disease,” “rape has nothing to do with sex,” and “race doesn”t exist, but racism is rampant.” It’s an idea that makes no sense, which may be why its proponents feel compelled to constantly hammer you in the head with it until you finally relent merely because your head hurts.

More importantly, it’s a blatant act of moving the goalposts. It’s an attempt to redefine the term “racism” in a way that effectively silences whites and cripples their ability to address the topic with any level of meaning, honesty, or emotion.

You may counter that I”m merely whining at the fact that my privileges are being taken away from me, but what non-masochistic human being isn”t going to get upset about having things taken from them? You can take candy from either a baby or a 90-year-old, and they”ll both still cry.

When attempting to define terms, I suppose that dictionaries can in some minor ways be helpful. Webster’s defines “racism” thusly:

1
:  a belief that race is the primary determinant of human traits and capacities and that racial differences produce an inherent superiority of a particular race
2
:  racial prejudice or discrimination

OK, I”ve looked over that definition many times and still haven”t seen an addendum that says, “….but only when white people are doing it.” So for the time being, the official definition of “racism” does not contain any such “whites only” clause.

But according to Luke Visconti, a white man who is the CEO of something called DiversityInc, such dictionary definitions of racism are indeed “too white.” From a cursory glance of his website, I suspect that everything may be “too white” for Visconti”possibly even himself. If he were offered the magical ability to molt his skin like a snake and emerge as a coal-black Haitian, I tend to believe he”d accept the offer, provided there was no salary cut.

All of his memes are familiar and threadbare, and he barfs them up like a baby bird regurgitating a half-digested worm to please its mother. Like many of his ilk, Visconti attempts to split semantic pubes”he distinguishes “racism” from “bigotry” and “prejudice.” He says that while one may run across the occasional black bigot, such lone wolves do not have the institutional power to discriminate against whites in the way that our government and media routinely discriminate against blacks by…um…actually, he didn”t provide any examples of how the government and media currently do this.