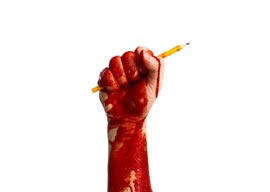 The attack in France will likely empower fringe groups like the Front National and UKIP, but I don”t care about skinheads, even when they”re right. I don”t even care about terrorists. We always focus on the manhunt, as if these “lone wolves” were important, when the only thing that really matters is the masses. Until the mainstream realizes that “not all people are civilized””and, further, not all cultures are civilized”the beheadings will continue.

Sure, liberals have “actively tried to harm [me] personally” way more than terrorists have. Yes, I realize our foreign policy makes Islam angry. I also know the Koran is steeped in violent ideology, and Muslim culture has a serious problem with inbreeding. These are not disparate issues. They are all the same. In short, their culture sucks, and by ignoring that, we are enabling them to walk all over ours. We need teachers and housewives and accountants and liberals and journalists to accept that there are some xenos it pays to be phobic of.

France is a perfect example of this. The mentality there has always been: put on a beret and a striped shirt and you”re French. They didn”t ban the burqa because they hate Muslims. They banned it because they love them so much that they want them to be French. It’s for this reason that they don”t keep ancestral data on their population. “Nous sommes tous des FranÃ§ais“ is their philosophy, and for a long time, it worked. It worked on the Vietnamese and it worked on the Africans. The Arabs are a different story. They don”t assimilate, because their allegiance will always be to Islam.

“This isn”t an ethereal threat with complicated roots that we need to “open a conversation” about. It’s a religious war based on irreconcilable differences. How many attacks do we have to endure before we realize this?”

The banlieue”the concrete Parisian suburbs beautifully portrayed in La Haine“is essentially a fifth column for the Muslim world. The colonists there have absolutely no interest in French culture, as demonstrated by the bizarre language they invented. It’s a bastardization of French that has words spoken backwards and is virtually incomprehensible to French speakers. The banlieue is where the shooters were likely radicalized.

Americans see France as a different planet that has nothing to do with them, but nous sommes tous des Westerners. The Charlie Hebdo shooting is very similar to the Boston Marathon bombing. Those bombers were radicalized in America. And our cartoonists get death threats, too. Seattle cartoonist Molly Norris has been in hiding since 2010 for drawing a Mohammed cartoon. Elle est Charlie. Our tolerance and love for multiculturalism may have been a good idea at one time, but it’s totally jumped the shark. Today, Western culture is about fostering hatred”toward Western culture. That’s dangerous.

Three policemen spotted the gunmen before the attack, but they pedaled away because they were unarmed. French police can carry guns if they want, but most choose not to. The image of that unarmed policeman pleading for mercy as a Muslim puts a bullet in his head is a powerful symbol of how weak we have become. The authorities couldn”t track the shooters with cameras because Paris isn”t covered in cameras the way London and New York are. The French think it’s rude.

We have the same problem. Even discussing the shooting is fraught with courtesy. When the Telegraph reported on the story, they cropped out the incendiary cover that Charlie Hebdo‘s dead editor was holding in defiance. He must be spinning in his grave.

The Toronto Star was brave enough to run a cartoon (linked because we didn”t have time to buy it) featuring a Charlie Hebdo cover, but apologetic wording soon followed, as the editor described the image as “an Arab man”not a Muslim man.” Very few newspapers dared reprint any Charlie Hebdo cartoons, opting to write about how important it is to be brave, and showing pictures of demonstrators instead (followed by qualifications at the end saying “not all of the editors” concur with the article).

Union Square here in New York was flooded with young people carrying pencils and raising them with clenched fists. Oooh, I”m scared. Social media put in its two cents by creating hashtags like #JeSuisCharlie and posting pictures of the cartoons on Instagram. I saw one girl post a picture of Hara-Kiri (of which Charlie Hebdo was a spin-off) with the caption, “I can”t believe I”ve received more likes on a selfie rather than my picture of #jesuischarlie. Wake up people.” Is it possible to be less self-aware? Could our entire civilization be less self-aware?

These weren”t just a couple of cartoonists who were antagonizing Muslims and eventually pushed too far. These were French icons, particularly Cabu and Wolinski. In the 70s and 80s, they were always on French TV lampooning politicians and public figures on both sides of the political spectrum. The issue that was on the stands the day of the shooting featured “Le petit JÃ©sus” exploding out of the Virgin Mary’s vagina.

They weren”t just talking heads, either. They”d draw cartoons live on the show that mocked another guest, and the entire French-speaking world would watch in rapture. Wolinski was the master of this and received France’s most prestigious award, the LÃ©gion d”honneur, from president Jacques Chirac. This is a guy Wolinksi was constantly drawing with his pants down, but the cartoonist was so revered, Chirac was happy to oblige. The understanding amongst public figures in France was, if you aren”t being ridiculed by Georges Wolinski, you don”t matter.

In France, comics aren”t just something nerds read. They”re something everyone reads and they always have been. Bandes dessinÃ©es, as they”re called, are considered high art. Being a cartoonist there is like being a popular musician or a venerated painter here. This goes back all the way to Napoleon, who was constantly being mocked by cartoonists.