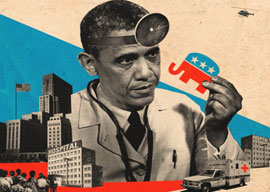 Last week, the Supreme Court decided we all have to buy government broccoli for $1.7 trillion. This is the analogy fiscal conservatives are using to describe the Obamacare mandate that insists everyone pay their “fair share.” John Derbyshire says that “healthcare isn”t broccoli,” because while emergency rooms are forbidden to turn away the uninsured, grocers can refuse to provide vegetables to those who can”t afford them. We already pay tax for the people who go to ER uninsured, so why all the outrage? The bill’s details seem pretty reasonable, but just as broccoli is not healthcare, America is not Europe. We have incompetent government just like Europeans do, but we also have 12-15 million illegals and 150 million fat pigs.

We”re told the healthcare system is “broken,” but I”m not convinced giving the government more money and more power would help. It never does. Besides, are things really that bad here? In Canada, we would regularly wait 12 hours in ER. My grandmother in Scotland had to wait an entire year to have her hip replaced. “I”ve had my health card for 90 years,” she told me recently. “It should be platinum by now.”

“We have incompetent government just like Europeans do, but we also have 12-15 million illegals and 150 million fat pigs.”

I have insurance but I called around various providers in New York to see how much it would cost if I didn”t. Aetna said I would be looking at $6K a month and when I said “WHAT!?” they said they could go as low as $4K if I paid for all my prescriptions. (They didn”t seem to care about pre-existing conditions, which surprised me.) The average American household income is $60K. Who has an extra $50k floating around on top of that? I said this to the Aetna rep, who told me about a Bloomberg plan they facilitate called Healthy NY where families making less than $50K can pay about $1K a month for full coverage. Again, pre-existing conditions did not seem to be an issue. The plan is especially forgiving with entrepreneurs. Sole proprietors get to subtract their business expenses and declare their net as their total income. Is this a system in crisis?

I say let the states deal with it. State governments are smaller and less capable of inflicting harm on an already sick system. They also know how to conduct their affairs better than their prissy and omnipotent boss. Obama was aware that rogue states were his Achilles” heel so he included a penalty for any state that doesn”t toe the line. Individual states are fighting back and refusing to kowtow to King Obama’s plan. Governors in fourteen states, including Democrat Jay Nixon of Missouri, have suggested they are going to reject the expansion.

Most of my single friends don”t bother with any plans and just pay cash for every visit. They all have bills way below Healthy NY’s $12k a year. A guitarist friend of mine broke his hand and after all was said and done, he paid $3k to have his hand 100% fixed. Another buddy was worried he had appendicitis and wanted to be sure his stomach wouldn”t explode while on tour with his band. Two doctor visits, blood tests, and a set of full-body X-rays cost him a total of $600. It turns out that the pain he was feeling was alcohol burning his colon after a two-week bender. It appears New York State has figured out its own healthcare problems and those who don”t need it are doing just fine without it. This is the impression I get living in New York for 13 years.