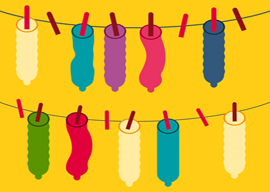 If you’re a black woman living in Los Angeles County—as I’m sure many of our readers are—you are six times more likely than a white woman living in LA to have syphilis. Your odds are a little better vis-à-vis Latinas, but not by much—you are still about three times likelier to have The Syph than those small, brown, and friendly women who clean the City of Angels’ motel rooms for starvation wages.

“STDs in L.A. County are skyrocketing,” warns a recent headline in the Los Angeles Times.

That sounds horrible! What might be causing this rash of new sexual rashes? Promiscuity? Unsafe Sex? Online hookup apps?

Don’t be silly. “Officials think racism and stigma may be to blame,” the Times reassures us.

It’s possibly the most ridiculous article I’ve seen in a year that has been marinating in ridiculousness. It begins with a solemn and of course unintentionally hilarious story of LA minority youths in a church auditorium practicing how to put on a condom.

That sounds like a sensible way to avoid contracting STDS. But naturally the article quickly veers into the usual braindead hypnotized gobbledygook about “racial discrimination” and how neighborhoods “where people of color reside” are likelier to be more polluted, which, I am to assume, somehow drives the residents so crazy that they spontaneously start engaging in unprotected sex.

“Thinking outside the box might be the problem here.”

“Los Angeles County health officials are trying to think outside the box as they struggle to curb rising STD rates,” the Times says with a dumb sort of hope.

Why think outside the box and blame racism for high STD rates among minorities? Why not keep your little brain nestled safely within the box and investigate whether it’s correlated to obvious things such as rates of sexual activity and the tendency to have unprotected sex?

An allegedly scholarly 2016 paper titled “The Impact of Racism on the Sexual and Reproductive Health of African American Women” strains with every last sphincteral muscle to argue that racism may be at the root of shamefully high STD rates among black women in the USA:

We argue that racism, in both historical and contemporary contexts, is one condition that warrants more attention in models seeking to understand the sexual and reproductive health outcomes of African American women.

The paper’s authors also argue—or let’s say they give it that ol’ college-feminist try—that black women suffer disproportionately high HIV rates due to things such as the mass incarceration of black men, which as we all know has nothing to do with criminal behavior and everything to do with racism. They also suggest that due to slavery, Africans may mistrust being touched by white people, including doctors. These doctors, racist assholes that they are, “project stereotypes of sexual promiscuity toward” their black patients, and again, it has nothing to do with a disproportionate quotient of their black patients waltzing into the office with leaking herpes sores.

Exactly how bad are STD rates among America’s People of Darkest Color?

In 2014, black women “accounted for 60% of the estimated new HIV infections that occurred among all women.” In 2016, blacks accounted for 44% of all HIV diagnoses in America. Keep in mind that blacks are only 13% of the population.

According to the CDC—which is right here in Atlanta, and I fear I’ll get an STD every time I drive by it—black American adults are around five to six times more likely to have chlamydia than white adults. (I still don’t know what chlamydia is and I suspect that, very much like nougat, it really is nothing at all.)

Of course, none of this might even possibly in a million years be related to the fact that blacks, over and over again, self-report higher frequency of sexual activity than do whites. It couldn’t be that black males report losing their virginity three years younger on average than Asian males do. And this disparity, naturally, has nothing at all to do with the documented fact that black males have the highest testosterone levels among all races while Asian males have the lowest.