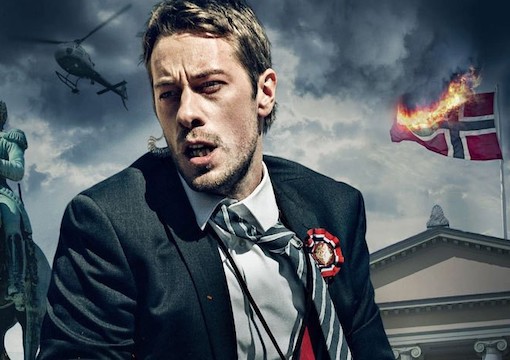 One of the more interesting television series of the past decade is Occupied, an intelligent Norwegian nationalist political thriller now available on Netflix. It’s both an anti–European Union tribute to the Norwegian people and the near-utopian country they have built, and a clear-eyed critique of their increasing foolishness. Although played out with stoic gravity, the show also offers an amusing satire on Nordic gender relations as its henpecked heroes can seldom persuade their feminist wives to heed their husbands’ warnings that life is about to become far more serious.

Occupied loses momentum in its 2019 third season, but the eighteen 45-minute episodes from 2015 and 2017 are an impressively lucid imagining of a future European political crisis. While an American movie would concentrate on explosions and an American television show on soap opera, this Norwegian thriller focuses on its characters trying to decide what their loyalties should be in this fluid situation.

Moreover, Occupied serves as a vast metaphor for what happens to a feminized culture that finds itself cast back into the old masculine world of force. It’s based upon a 2012 story idea by best-selling detective novelist Jo Nesbø, who takes a Hobbesian view of human nature. “I think the feeling we [Norwegians] are secure and things can’t really change is an illusion,” he cautions.

Occupied is set in a near future in which an isolationist America has withdrawn from NATO, leaving small but oil-rich Norway without a superpower protector, while an energy crisis caused by civil wars in the Persian Gulf devastates the economies of the rest of Europe.

A climate-change-driven hurricane kills 600 Norwegians, propelling the Green Party into office. Its self-confident prime minister announces that he will actually carry through with his campaign promise and shut down Norway’s lucrative offshore oil and gas fields to save the world from carbon emissions by “leading by example.”

Norway offers instead to supply Europe with electricity from its new-generation thorium nuclear power plants: In Occupied’s blend of environmentalism and nationalism, the world will be redeemed by an element that was discovered by Norwegians in 1828 and named after the god of thunder.

The European Union (which Norwegian voters refused to join in referendums in 1972 and 1994) is aghast at the economic havoc that Norway capping its oil and gas wells would inflict upon the Continent, so it asks Russia, with its strong military, to intervene in Norway’s energy fields to restore production.

“Occupied serves as a vast metaphor for what happens to a feminized culture that finds itself cast back into the old masculine world of force.”

In reality, of course, Russia, which ranks with the U.S. and Saudi Arabia as the top producers of both oil and natural gas, would find Norway’s self-inflicted shutdown economically and strategically beneficial, giving Moscow more influence over Western Europe. So it wouldn’t make much sense for Russia to cooperate with the cry for help from Germany, France, and Sweden unless Moscow was intending all along to steal Norway’s oil, in which case the E.U. wouldn’t ask them either.

Still, it’s not a bad premise.

The first episode begins with the prime minister announcing an immediate ban on fossil fuel extraction. As he then triumphantly climbs into his waiting helicopter (the PM doesn’t seem to have internalized just how much poorer his plan would leave Norway), he is grabbed by Russian spetsnaz. His personal bodyguard, a boyish version of Clint Eastwood’s taciturn, squinting Secret Service agent from In the Line of Fire, takes off in hot pursuit, while a muckraking journalist calls his editor to say he was the only reporter to see the PM being kidnapped.

The Russian commandos connect the Norwegian leader via video conference with the Jean-Claude Juncker-like E.U. Commissioner and the Swedish PM, who explain that Europe has asked their Russian friends to take over Norwegian energy production temporarily. But it’s not a 1940-like invasion, he’s assured, it will be more like Finlandization after WWII.

The stunned politician is then deposited on a forest road, where his bodyguard finds him. As the PM recovers his self-confidence, he calls the cabinet to instruct them not to mobilize the military or even mention the kidnapping because he’s sure he’ll be able to get the Russians to peacefully leave through negotiations.

Once he has safely deposited his boss back in the capitol, the bodyguard urgently calls his lawyer wife to tell her to pick up their daughter from school and go hole up at her mother’s home in the countryside. His wife, who is an Ilhan Omar look-alike of Ethiopian descent but who is extremely Norwegian in personality, explains that it’s his turn to get their daughter. And why should they go to her mother?

The PM’s minder explains that he isn’t authorized to tell her how he knows, but “War may break out.”

“War? What war? I don’t see any war,” she scoffs, looking out the window at the peaceful Oslo afternoon. The poor man gives up and gets his daughter from school.

His wife becomes an immigrant rights activist campaigning to ensure that the Russian newcomers are not deprived of their human rights by xenophobic Norwegian institutions.

Meanwhile, the reporter who got the scoop of the century about the PM being kidnapped gets home and tells his wife, “I had the craziest day.” But she’s not interested in hearing about it and orders him to wash the dishes, which he meekly does.

Soon, Russian energy workers are arriving along with suave diplomats and sinister oligarchs. The prime minister, with his bottomless certainty that he can talk his way out of any problem, tries to mollify all sides while trusting that the Russians will, like they promised him, soon be gone. He seems to be making progress, but his pregnant wife announces she’s moving to Paris, where she takes up with an Algerian Jewish human rights lawyer.

Then a Norwegian soldier, who appears to have been cast for his resemblance to rightist Norwegian terrorist Anders Breivik, tries to shoot the aristocratic Russian ambassadress, which sets off a chain of escalating provocations on all sides.

Slowly, the prime minister grows a patriotic spine and becomes rather heroic in the second season as the leader of the underground resistance, facing off against his old bodyguard, who now heads the political police trying to prevent the PM’s Free Norway from inciting an outright Russian military conquest.

Which man is in the right? Your opinion may vary from episode to episode.

By the way, Occupied’s portrait of a political leader emphasizes something I’ve never seen before in fiction, although I’ve witnessed it in real life. What elevates the prime minister above everybody else in Norwegian public life is that every time his underlings bring him yet another problem, no matter how hopeless-sounding, he is inexhaustibly willing to make the phone call right now in the expectation that he can conjure up the right words to find a solution. Frequently he fails, but he keeps at it so tirelessly that he remains Norway’s indispensable man.

Throughout Occupied, Norwegian women are depicted as mildly contemptuous of their menfolk and unable to resist darker men from afar. For example, a pretty young blonde recruits a pudgy computer genius to help her get her black Muslim immigrant boyfriend out of prison for an attack on a Russian facility. Smitten, he performs prodigies of hacking in her service, but with no response from lovely Frida, whose heart permanently belongs to Faisal from Somalia.

Strikingly, Occupied portrays the Russians as—while in the wrong morally—having more appealing personalities than the Norwegians. The Nordic men are depicted as efficient but charmless, while their earnest solicitousness toward their womenfolk’s feminist prerogatives tends to irritate the Norwegian women into petulance.

The Russian characters, in contrast, understand sex differences better. Their ambassadress is Machiavellian, but her flashes of womanly warmth make her the most likable female character. The journalist’s wife’s boyfriend has a sense of fantasy attractive to women that he presumably learned from attending Swan Lake and The Nutcracker at the Bolshoi Ballet, perhaps the summit of feminine-oriented high culture.

While the Russians are pictured as opportunistic, ruthless, and grasping, they also have some admirable traits, such as more classical taste than the Norwegians. When the Russians arrive in Oslo, they acquire most of the impressive old stone buildings, while leaving the Norwegians their plethora of Apple Store-like glass and metal 21st-century offices and homes.

On Occupied, all of Norway lives in a house of glass.