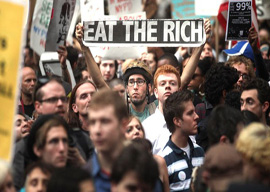 The left is desperate to have Occupy Wall Street ripple into a movement to challenge the Tea Party. The problem is that this movement’s “Occupants” are as relevant as navel lint.

The Occupants say one reason they need a movement is to go after banks [wink] who may have taken advantage of some of the people who lost their homes. The premise sounds noble and is meant to elicit outrage from mindless drones.

Even though the vast majority of people who got subprime loans knew they really couldn’t afford their homes, I don’t necessarily blame them for taking advantage of the credit loopholes that gave them a chance at ownership. If liberal politicians were willing to provide a shortcut to that small piece of the American Dream, why not give it a shot?

So I blame liberal politicians. They changed the rules to help uncreditworthy folks take a shortcut to their dreams. As with most shortcuts, the relaxed rules led to worse credit and false hope for millions of poor people. Subprime loans did for homeownership what the Hindenburg did for travel. The harsh reality is that your home is not your home until you possess the clear deed; until then you are a renter who gets a tax break.

Don’t expect the Occupants to actually connect the dots and blame Jimmy Carter, a white racist Democrat who got all this started with the Community Reinvestment Act, an attempt to assuage his guilty conscience. Nor will Occupants blame Bill Clinton and ultimately Barack Obama, John Kerry, Barney Frank, and about all other powerful Democrats in office at the time who took bribes to “help the poor.” For Occupants to blame the actual perpetrators would take both brains and brass nuggets, neither of which they possess. But the Tea Party is supposed to fear these nuggetless, brain-dead zombies? Janet Napolitano has a better chance of marrying a Chippendale dancer.

“The Occupy movement didn’t plan on America being at maximum occupancy already.”

Two weeks ago this movement was a handful of hapless “hope and changers” running on Obama’s Marlboro fumes. Big deal the regressives managed to get their most ignorant base—liberal youth—to join them. Liberal youth aren’t down for the cause. They came because they were told that Radiohead would be playing. Thank God for the liberal elite that wackademia produces stupid liberal kids.

These new-millennium beatniks put down their medical marijuana and Xboxes, crowding into their vans to attend the charade: Dude, I thought you said “parade.”

But just adding the “yoots” was not enough to show the massive numbers the left wanted the Occupants to represent, so onto the next lowest rung on the victimization ladder…minorities.

ACORN got the no-bid contract to provide “people of color” and promptly put out casting calls, running ads on BET.

With the promise of fully loaded SNAP cards, the mocha chocolata yayas took off their house shoes, put on their boots, and came out to march against [insert rich white capitalist organization here].

The Mexicans followed closely behind, responding to ads on Telemundo and Univision that promised amnesty, menial jobs, and an authentic molcajete in every barrio kitchen.

It was said that there were Mexican protesters who couldn’t even read the signs they were holding. And there were non-English-speaking Mexican nationals in attendance as well.

This is not about Wall Street. There is an amazing amount of orchestration in play at Occupy rallies, all in an effort to make us believe that this is a movement—the answer to the Tea Party. I could launch into a litany of reasons why the Occupants are in no way like Tea Party folks, such as the fact that Occupants are funkier than a fat man’s drawers, downright nasty people hygienically speaking. Most of the Occupants look like they got dressed behind a roaring jet engine. Think of the TV show Hoarders morphed with Intervention, and you get an idea of life as an Occupant.