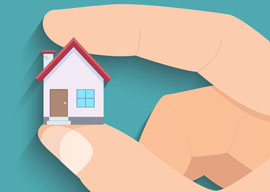 But if you”re a Christian”especially a Catholic, even a Vatican II baby like me”it’s easy to catch a contact buzz from tales of heroic hermits and hobbits alike. If there”d been a Julian of Norwich play set””Anchorite Barbie”!”I would”ve begged for one.

Compound that with my below-average stature, my schizoid temperament, and an only child’s acclimation to catatonic quietude, and it’s inevitable that I caught tiny-cabin fever.

For all those reasons, I was already into tiny houses long before they became one of this decade’s (ironically) biggest fads. Pre-Internet, I was reduced to checking the same book out of the library every three weeks and curling up with it in my already wee Toronto studio apartment, one so small that the refrigerator was exiled to the “living” “room” because it couldn”t squeeze into the comically diminutive galley kitchenette; even then-size-zero me had to suck in my stomach in order to maneuver between the stove and the sink.

And to me, the place was almost perfect. (“Perfect” would have been a lighthouse with cable TV and a Starbucks at the bottom.)

“While apartments were increasingly being depicted in pop culture as compact arenas of craziness and crime, my still-small brain came to equate houses with horror.”

When the Web came along and it became a “thing,” I browsed “cabin porn” online, sites with names like SmallHousesSwoon.com and TinyHouseListings.com. I especially loved looking at pastoral pastel cottages with rock gardens, preferably close to some body of water.

Today I live in a nice-size (for two), decidedly homely high-rise condo, from which, on a clear day, I can just about make out a slender blue sliver of Lake Ontario a few miles south. When it came to settling down in real life, I wasn”t put off by the “tiny” so much as the “house.” I grew up in apartments during the 1960s and “70s; at one point there were five of us (including two teenagers) in a two-bedroom, one-bathroom. While apartments were increasingly being depicted in pop culture as compact arenas of craziness and crime, my still-small brain came to equate houses with horror. I mean: The Manson Family or Dick and Perry could just walk through the front door! I”ve lived in only one actual house, for six months. We were broken into twice, once while one of my housemates and I trembled in an upstairs bedroom. Never again.

On a more prosaic note, today I can survey the neighborhood from my balcony and snugly, smugly watch my home-owning neighbors shoveling driveways or piling flood-wrecked basement furnishings up on the sidewalks.

What I don”t watch, however, are the “reality” shows that inevitably popped up as the online “cabin porn” craze crested. Look: I got off on still photos of completely finished and furnished domiciles (constructed, perhaps, by elves…) in which I could pretend to live quietly and alone. Why would I want to spend 30 minutes staring at a couple of screaming human beings struggling to secure building permits and install a composting toilet?

And anyhow, as you had guessed:

Remember that couple featured in the documentary “Tiny,” which depicted their tiny home’s construction and extolled the minimalist lifestyle? They parked the end result in a field in Colorado and never lived in it together full-time. (In a blog, they explained that they left this out of the movie “so as not to spoil the experience of seeing that story unfold on screen.”) You may also recall Carrie and Shane Caverly, who were featured on TV shows and in newspaper articles for “bonding” in their tiny home? They lasted 18 months before they decided it was “too small” and moved into an apartment.