Okay White People, Break It Up 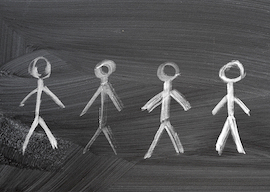 In a season 3 episode of NYPD Blue, profoundly un-PC detective Andy Sipowicz (played by Dennis Franz) gives his son, a newly minted beat cop, a lesson in street patrol. Sipowicz points to a group of young black guys standing on a corner. He tells his son that the men, while not technically doing anything illegal, nevertheless have to be chased off, because a klatch like that can only mean trouble.

“Right now they own that corner,” Sipowicz says. “A good cop’s gonna take it back.”

And there, in that one scene, is an inadvertent depiction of what’s happening in America today. Leftists are Sipowicz, and they’ve decided that wherever and whenever “too many” whites gather, they gotta be run off. How many times do we see the media slam a movie, a TV show, an editorial board, a slate of candidates, or a roomful of people merely for being “too white”? It’s simply taken for granted that anything deemed “too white” is bad and in need of dispersal. It’s not that the actions of the whites who gather are necessarily wrong; the people are wrong. They’re wrong for being white and “owning” a corner.

The antiwhite beat cops just cleared another corner, and wouldn’t ya know, it was one of my favorite places to hang. Feral House, the publisher of my autobiography, has fallen. Feral House, founded and run by Adam Parfrey, was one of the last truly independent publishing companies in America. Adam was my publisher. Adam was Jim Goad’s publisher. Adam believed in giving a voice to those who are shut out of the mainstream: the revisionists, the misogynists, the skinheads, the heretics, the haters, the anarchists, the occultists, the conspiracy theorists, and anyone else the mainstream publishing conglomerates consider toxic. Adam was my friend for almost thirty years. No one else in the world would have touched my book, which Adam published over the vocal objections of his female staffers.

Well, Adam’s dead now (you can read my Takimag obit for him here) and those staffers are in charge, and Feral House has gotten “woke.” As of this month, the company’s mandate has officially changed, with a new mission statement that violates Adam’s corpse in a manner that even Ed Kemper would find repulsive:

We are looking to expand our catalog by including more writers who identify as Women, People of Color, LGBTQ, and others who have felt excluded from traditional publishing. Beginning August 1, 2019, we are opening our submission process with a call to authors with new and distinct voices to submit non-fiction manuscripts that fit into our areas of interest. Stories by and about Women, People of Color and LGBTQ identities are especially encouraged to submit.

R.I.P. Feral House. That corner has been successfully cleared.

“The more corners you clear, the more likely you are to come across that one corner where the people refuse to leave.”

And by the way, how idiotic must someone be to claim that women and “people of color” are “excluded from traditional publishing” these days? Let me rephrase that: How idiotic do they think we are to believe that? The unnecessary capitalizations and poor grammar aside, what happened at Feral House is par for the course these days; something that was unique is gone, replaced by the commonplace and ubiquitous under the guise of “diversity.”

Chasing white males off their corners has become so prevalent in America these days, white dudes are now willingly clearing themselves before they can be rousted. Kurt Sutter, creator of the wildly popular Sons of Anarchy TV show, announced last week that he’s giving up his latest creation, the Anarchy spin-off Mayans M.C., because he’s white. “It’s time for the white man to leave the building,” Sutter told the trades. He’s handing the show over to the “Latinx” members of his crew, so that they can imbue it with their “own emotional truth” as “people of color.”

“Sutter makes an excellent point. This is precisely the action that white creators should be doing,” crowed Lynne Versluys of The Blast.

Sutter’s willingly giving up his baby. Adam Parfrey’s baby was taken from him postmortem. Whites are already attacked in everything from the arts to fashion to food for “cultural appropriation,” and now that this charge has become a guaranteed corner-clearer, the next step is to force whites out of things that are completely their creation. “Stay in your own lane” has become “okay, now exit the highway entirely.”

Did anybody really think “stay in your lane” would be the end of it? As I wrote back in 2016, leftists get what they want through “steps, stages, and patience.” Giving ground doesn’t stop them; it just leads to the next demand and the next escalation.

The Aug. 29 homepage of the Amazon-owned Internet Movie Database (IMDb) is something worth preserving for some future museum documenting how the U.S. fell to shit. The “top news” section featured a rave review of Sutter’s decision to remove himself from Mayans M.C. because of his race. And right below that was an article panning Old Navy for not having enough “people of color” in the background during a taping of Queer Eye. America’s future is right there on that page: Yay Kurt Sutter for clearing his corner of whites, and boo Old Navy for allowing too many whites to congregate in its aisles.

In the past month alone, we’ve seen portrait walls honoring famous physicians and scientists at Rockefeller University, Yale School of Medicine, Brigham and Women’s Hospital, and the University of Michigan attacked for being “too white” and “too male.” The Democratic Congressional Campaign Committee self-cleared its corner after accusations that its top staffers were “too white.” New York’s Commissar Bill de Blasio ordered a corner-clearing of employees of the city’s Department of Cultural Affairs-funded museums, theaters, zoos, and other institutions because there were “too many” white people in the mix. In California, the application period to join the state’s Citizens Redistricting Commission was extended because so far the applicants have been “too white” and “too male.” The staff newspaper at Notre Dame was attacked by “Latinx” student leaders for being “too white.” Craft beer was attacked for being “too white.” So were robots.

A disgruntled black techie even claimed that black Google employees are “too white”!

That was all within the past 30 days, and even better stuff is coming. This week we got the first trailer for Amazon Studios’ major motion-picture release The Aeronauts. Here’s how The Hollywood Reporter describes this “based on a true story” film:

Set in 1862, the biographical film follows pilot Amelia Wren (Felicity Jones) and pioneering meteorologist James Glaisher (Eddie Redmayne) as they embark on a hot-air balloon journey to advance human knowledge of the weather and fly higher than anyone else in history.

“Biographical”? Well, 50% of the movie is. And 50% is pure bullshit. In that thing leftists hate called “real life,” meteorologist James Glaisher did indeed undertake the journey depicted. But the person who made the trip with him, the person responsible for creating and piloting the actual balloon, was not some comely Victorian aeronautrix. A white dude named Henry Coxwell (clearly a misogynist from the name alone) was the other guy in the basket, and it was Coxwell who saved Glaisher’s life at seven miles above sea level and –29C when the balloon ascended uncontrollably and Glaisher began to pass out. Above cloud level, at unprecedented heights, Coxwell, fighting to stay conscious, bravely climbed up the balloon’s rigging to release the blocked valve that was preventing descent. Oh, and he released it with his teeth while holding on for dear life with both hands. In the trailer, the chick is shown accomplishing this feat. Coxwell has been entirely erased from the story (much to the chagrin of the Royal Academy), and his heroic, lifesaving act has been redistributed to a woman who never existed.

And just for good measure, Amazon has added another fictional character to the “fact-based” film, a “person of color” whose genius is credited with “pushing” Glaisher “towards the stars.” So now the true story of two amazingly daring white dudes who defied death to advance human knowledge has become the Mod Squad. Why? Because the real story was (say it with me) “too white.”

When YouTube recently pulled the VDare channel, it wasn’t just because VDare represents yet another corner of whites on the ’net; it’s that it represents a corner of mouthy whites. If you’re gonna be purging everything in the world that’s “too white,” you can’t have people bringing up uncomfortable truths like perhaps certain accomplishments are “too white” because the whites behind them were smarter and better than their peers, including their “peers of color.” If you allow people to suggest that something is “too white” not because of racism or coincidence (hey, it just as easily could have been two Aborigines and a Tlapanec tranny who built and flew that balloon), you plant the seed that maybe those old white men are being honored for a reason, and perhaps that reason has something to do with the forbidden things that must never be spoken of (for example, the notion that all humans and all civilizations are not equal in potential, ability, and accomplishment).

So of course sites like VDare have to be silenced, along with all the other, similar channels YouTube axed in its recent purge (the VDare channel has been restored, for now). If you make it unprofitable and unwise to be “too white” or to defend things that are “too white,” before you know it, whites will learn on their own to stop congregating on corners. They’ll happily surrender their turf, as Kurt Sutter did, and as Feral House did once the only person there with integrity kicked the bucket (be on the lookout for Feral House’s spring 2020 release, Up, Up, and Awoke: The True Story of the Two Aborigines and the Tlapanec Tranny Who Flew a Balloon to America in 1862 and Won the Battle of Antietam).

At the end of NYPD Blue’s third season, Sipowicz’s son is killed in the line of duty. Off the wagon and blinded by rage and sorrow, Sipowicz, out of uniform and off duty, stumbles to the corner where, just weeks earlier, he’d instructed his son about chasing off the black guys. For the first time, we get close enough to the “troublemakers” to hear that all they’re doing is talking about music. They’re not actually causing trouble or committing crimes. But when Sipowicz drunkenly tries to roust them, the guys go full thug, beating and stomping him within an inch of his life.

The lesson? Left alone, those guys weren’t hurting anyone…until someone tried to run them off because of their race. Fed up and pissed off, they reacted with violence and brutality.

This could be seen as a cautionary tale for today’s leftist Sipowiczes. The more corners you clear, the more likely you are to come across that one corner where the people refuse to leave.

Better still, the corner where they actually fight back.