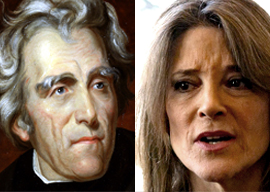 Marianne Williamson is easily the most entertaining candidate the Democrats have belched up this go-round, so let us gather to celebrate her campaign before it likely craps out on Wednesday and she gets disqualified from the third debate because she couldn’t even scratch together a measly 2% support in each of four prominent polls.

But Miss Marianne’s little flame flickered as brightly as it could for one brief and hilarious moment on the national stage, and despite the fact that even enough Democrats are sane enough never to vote for her, it cannot be denied that no one ever went further in politics by saying less than Marianne Williamson says.

Her 66-year-old head in the clouds, Williamson announced before a “Native American voting rights organization” in Sioux City, IA last week that when she becomes the nation’s first hippie Jewish woman president, her first act in office will be to remove—perhaps with a lot of psychic screaming involved—a painting of Andrew Jackson that Donald Trump had moved to the Oval Office when he entered the White House.

Addressing the crowd of sue-happy Sioux, Williamson addressed Jackson’s involvement in the Trail of Tears, which, as luck would have it—at least for the Sioux, that is—didn’t involve any Sioux:

I want people of the United States to come to understand that what occurred on this planet was one of the great evils of history, but that I believe in redemption for nations as well for individuals. We can atone. We can make amends. And if and when I’m president of the United States, we will. We will begin by taking that picture of Andrew Jackson off the wall of the Oval Office, I assure you….I am not a Native American woman, but I find it one of the greatest insults. You will not be insulted. You will be more than not insulted. If I am President of the United States, there will be a level of atonement, there will be a level of making amends.

Whoa, there’s a whole semi truck to unpack there.

“No one ever went further in politics by saying less than Marianne Williamson says.”

She’s not a Native American woman—in fact, her paternal grandfather chose “Williamson” to replace “Vishnevetsky” as his surname after reportedly seeing a sign that said “Alan Williamson Ltd” on a train, so it’s fair to say she’s not American in any sense of the term, at least not in the Cherokee sense or the Andrew Jacksonian sense—but she feels insulted on behalf of the Cherokee Americans and feels ashamed on behalf of the Jacksonian Americans. She believes in good…and she believes in evil as well, but she refuses to flinch in the face of it. She is dedicated—and she wants you to know this—to fighting evil on behalf of good. Even though her teardrop-shaped crystal heart beats without a drop of Cherokee blood in it, she promises her Native American brethren and sistren that when she becomes president, they “will be more than not insulted.”

Forgive me for getting all semantic here, but that means they will be insulted.

What do we know about Marianne Williamson, and why on Earth—if she truly considers this planet to be her home—does she think she’d make a better president than Andrew Jackson?

Well, like I said, her paternal grandpappy’s surname was “Vishnevetsky” and her mother’s was “Kaplan,” so don’t go lettin’ the “Williamson” throw you off the trail.

She was born into cushy circumstances in Texas and then drifted around the country in a journey of self-discovery in which she discovered that she really likes discovering herself and probably couldn’t stop it even if she tried. She once lived in a geodesic dome in New Mexico with a boyfriend for a little while. In her formative years, “some huge rock of self-loathing [was] sitting like a pit in the middle of my stomach,” she kvetches.

At yet another intensely self-reflective juncture in her life, she found herself “mired in a series of unhappy love affairs, alcohol and drug abuse, a nervous breakdown, and endless sessions with therapists.” In what may be a very weird way of working out her private issues in public, she wants white people to keep apologizing for slavery and supports up to a half-trillion dollars in reparations to be paid out to our nation’s spiritually wounded blacks.

After having a remarkable epiphany in her youth that forced her to realize “that people are the same everywhere,” she made it her mission to “create a beloved community” and fight the “dark psychic forces,” and yes, millions of people actually listen to this crap and find it profound and burst into tears as it shines a light within their dark, damp souls and shows them that with love, and only with love, can true miracles come from within—or something.

Oh, and she says things like this before wondering aloud why people don’t take her seriously:

Imagine the AIDS virus as Darth Vader, and then unzip his suit to allow an angel to emerge.

Sickness is an illusion and does not actually exist.

Cancer and AIDS and other serious illnesses are physical manifestations of a psychic scream.

If a person behaves unlovingly, then that means that, regardless of their negativity—anger or whatever—their behavior was derived from fear and doesn’t actually exist. They’re hallucinating. You forgive them, then, because there’s nothing to forgive.

I’m going to harness love for political purposes. I will meet you on that field, and sir, love will win.

Marianne Williamson—call her the “Love Harness.”

In contrast to the eternally frail and delicate Williamson, Andrew Jackson appears to have been forged entirely from granite and iron. His father died before he was born and his mother died when he was 14, yet he fought and battled and dueled his way to two consecutive terms as the nation’s first president who won elections by posturing as a man of the people against a corrupt establishment. His initial inauguration party notoriously allowed unkempt common revelers to trash the White House.

His own soldiers—whom he led to a stunning victory against the British in New Orleans even though they were outnumbered 2-1—dubbed him “Old Hickory.” The Creek Indians—one of many tribes he subdued—called him Jacksa Chula Harjo or “Jackson, old and fierce.” Not only did he survive the first-ever presidential assassination attempt—he started beating his attacker with a cane until others restrained the shooter.

Jackson spent most of his adult life with two bullets lodged in his body, which frequently had him coughing up blood. On the last day of an eight-year presidency, he said his only two regrets were that he “had been unable to shoot Henry Clay or to hang John C. Calhoun.” (He also once called Clay as “reckless and as full of fury as a drunken man in a brothel.”)

He successfully battled Indian tribes—who, lest it be forgotten, routinely attacked and murdered white settlers with extreme prejudice—and in the process snatched up much of what is the land of the modern American South. And in the “Trail of Tears”—what Marianne Williamson calls one of “the great evils of history”—an estimated 4,000 Injuns died. Looking at it from another angle, that’s about how many modern Native Americans drink themselves to death every four years.

And the Indian Removal Act of 1830 that Jackson signed did not require any Indians to move—they could stay put and simply acknowledge they were living under a new legal system, or they could relocate to new land west of the Mississippi. According to several analysts, relocation is what saved the so-called “Five Civilized Tribes” from being wiped out—unlike Southern tribes such as the Yamasee, Mahican, and Narragansett, who stayed put and went extinct as a result.

In short, Jackson was about expansion and strength, whereas Williamson is about submission and apology. He seems like he would have been fun (if ruthless), while she seems miserable (and ruthless anyway).

I’ll take Old Hickory over the new quackery, thanks.