On the Origin of Races 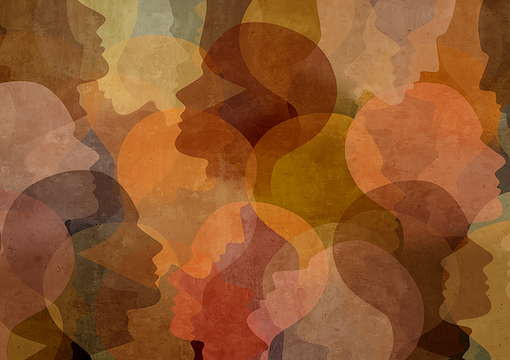 During America’s current racial crisis, it’s striking how useless and irrelevant has been the intellectual conventional wisdom, which denies that race even exists.

So I’m going to step back from the daily fray this week and sketch out a stylized history of how we came to have two opposing ways to try to make sense of the realities of human biological diversity: as continuous or discontinuous. Do people mostly just differ slightly from their neighbors in a steady progression of blurry differences around the world? Or is it more helpful in organizing our knowledge of human variation to think of most individuals as belonging to largely separate major races?

These mental frameworks grew out of the differing experiences with the Africa to the south of them of the ancient Greeks in the east and the Renaissance Iberians in the west.

South of Greece in northeastern Africa, the Sahara Desert was less of a barrier to land or sea travel due to the Nile, the green highlands of Ethiopia, and the much-traversed Indian Ocean. In contrast, in northwestern Africa south of Portugal, both the geography and the culture of the Sahara cut off Europeans from sub-Saharans until the 15th-century Portuguese made the great leap around the Muslim monopoly on trade. Hence, the ancient Greeks tended to see race as more a matter of degree, while the worldview that grew out of Portuguese and Spanish explorations saw it more as a matter of kind.

The vague Greek view of race, which envisioned peoples as gradually varying with distance from Athens, has returned to popularity in our deconstructionist age of Foucault, who loathed clear distinctions (such as age of consent laws that distinguished between adults and children).

In contrast, the more hard-edged Enlightenment categories that emerged from the discoveries of the age of exploration, picturing the human race as being reasonably divisible into continental-scale races, are now anathema.

And yet nobody acts like they really believe these highbrow talking points.

White intellectuals constantly reassure themselves that race doesn’t exist because, for example, Africans are, in a technical sense, the most genetically diverse. But in the real world, almost nobody cared that, for example, Barack Obama’s ancestry was geographically remote from almost all American descendants of slaves. It was more than enough that he was half black.

But both the clinal and dichotomous ways of thinking about race have their strengths and weaknesses. So, it’s worth understanding how they emerged.

At the eastern end of the Mediterranean, the classical Greeks saw a geography of gradual racial change, what academics now call clinal variation.

“The ancient Greeks tended to see race as more a matter of degree, while the worldview that grew out of Portuguese and Spanish explorations saw it more as a matter of kind.”

If a Greek journeyed south from Athens through the Near East and on to Egypt, people gradually got tawnier as the sun grew higher in the sky, rather like how the Greek traveler himself might be tanning. As he continued up the Nile, by the time he reached Nubia the inhabitants were browner. And if he made it all the way up the Blue Nile to Abyssinia, they’d be fairly dark.

The Greek model of phenotype variation envisioned steady geographic change. So the Greeks tended to think of race in directional rather than clear-cut terms: Go north to Scythia and people became fairer, go south up the Nile and people grew darker. And it was said that by the time one reached the source of the Nile at the foot of the Mountains of the Moon, where the sun stood straight overhead, the people were black.

But few Greeks ever got that far. While you wouldn’t die of thirst following the White Nile through the eastern desert into sub-Saharan Africa, the vast Sudd swamp in South Sudan remains annoying to cross even today. In A.D. 61, it stopped a Roman legionary expedition sent by the emperor Nero. European powers would not be able to project power south of the Sudd until the later 19th century.

And even then, the tropical diseases were a horrifying roadblock. When John Speke and Richard Burton went looking for the source of the Nile in the 1860s, they spent most of their expeditions flat on their backs for months at a time, shivering from malaria.

When the Greeks went west to the Pillars of Hercules, people only changed a little before the known world ended in the Atlantic. Go east and people slowly changed, but it was all rather vague because the Greeks had little in-person contact with East Asians.

Therefore, the Greek understanding of the intersection of geography and race was woozy. They tended to think in terms of “yonder”: If you go in that direction the people will increasingly look different.

While the Greeks were somewhat aware of racial discontinuities, they mostly saw race as deriving from the height of the sun in the sky, which varies continuously.

Moreover, the Greeks, while seafarers, tended to stick to the Mediterranean and not venture all that far from shore. In general, the Greeks had only limited technological capacity to travel through great empty spaces, and perhaps less appetite. Therefore, they seldom ventured away from inhabited routes.

In turn, that meant that they usually followed those well-populated routes where human biodiversity was clinal rather than sharply distinct. For example, Alexander the Great made it as far east as modern Pakistan, marching a total of 22,000 miles. But the people he conquered tended to only vary progressively in looks.

If Alexander had marched over the Himalayas into Tibet, he would have seen a sharp, sudden distinction in race because the dividing line between South Asians and East Asians runs through Nepal at about one mile of elevation. The East Asian Sherpas don’t like to go lower because they lack tropical disease resistance and the South Asians don’t wish to go higher because they lack altitude resilience. But even Alexander prudently avoided the Himalayas.

The Phoenicians and their Carthaginian offspring may have been more daring voyagers. Herodotus claimed that Phoenicians circumnavigated Africa. A Carthaginian named Hanno explored down the west coast of Africa, probably reaching sub-Saharan Senegal.

In Roman times, annual trading fleets setting out from ports on the African side of the Red Sea were blown by the monsoon to India. And Romans traded at least as far south in Africa as the coast of modern Eritrea.

Romans occasionally crossed the central or western Sahara to the Sahel, with one expedition to Lake Chad bringing back a rhinoceros that proved hugely popular in gladiatorial games in the Coliseum. But most of the limited trade between the Mediterranean and the Niger River was carried out via oasis middlemen, so biogeographic knowledge of sub-Saharan Africa was largely secondhand.

Interestingly, as one moves south through the Sahara, the racial admixture shifts from whiter to black from oasis to oasis. In other words, clinal variation exists even in the vast emptiness of the world’s biggest desert. Nonetheless, the Sahara outside of Egypt was largely empty and, on the whole, served as an immense blockade to gene flow, which is why people are so different-looking north and south of it.

And then to penetrate on foot south of the grasslands into the tropical forests was impractical for Mediterranean peoples because of the disease burden. Even Sahelians can find the Congo too much. The narrator of John Updike’s The Coup, the dictator of Kush, a fictional dry African country like Mali or Chad, dismisses Africa south of the Sahel:

To the south, beyond the Grionde, there is forest, nakedness, animals, fever, chaos. It bears no looking into. Whenever a Kushite ventures into this region, he is stricken with mal à l’estomac.

So most of sub-Saharan Africa was long isolated from the Mediterranean by double barriers: the Sahara and then the forests of fever.

In late antiquity, caravans of the newly domesticated camel began crossing the Sahara. But then in the 600s the new Muslim conquerors cut off the south side of the Mediterranean from Christendom with a sort of Muslin Curtain. Thus, European knowledge of Africa didn’t progress much for 800 years.

Finally, in the early 1400s, Prince Henry the Navigator of Portugal established research and development centers to enable systematic exploration by sea down the west coast of Africa, with Portuguese sailors finally rounding the Cape of Good Hope in 1487 and reaching India in 1498.

The Portuguese experience of race was rather different than that of old Greek land travelers in northeast Africa. Rather than see peoples steadily change with travel along highly populated routes, they sailed along the coast of Morocco, where the Berbers didn’t look all that much different from themselves, then sailed past the bleak coast of Western Sahara, and reached the Senegal River, where the people are black and broad-nosed, radically different-looking from Portuguese and Moroccans. Thus, they experienced race more as a discontinuous phenomenon than had the Greeks.

The Portuguese made excellent maps of their discoveries so the old hand-waving fuzziness about geography and race was no longer tenable.

Meanwhile, the Spanish monarchs hired Christopher Columbus to try a different strategy to reach the Indies: sail west across the Atlantic.

The Atlantic Ocean was an even sharper discontinuity than the coast of the Sahara Desert. With the exception of the Canaries, which were populated by a Berber people from the Maghreb, mid-Atlantic islands such as Madeira and the Azores were wholly unpopulated.

As of 1491, nobody, other than the Vikings in the far north, is known to have made a round trip across the Atlantic ever. Before Columbus, to go from Africa to the Americas took tens of thousands of years of migration and evolutionary adaptation to first get Out of Africa about 70,000 years ago and then, ages later, cross from Siberia to Alaska.

Although Columbus mistakenly referred to the locals he found as “Indians,” within a few decades it was clear that he had discovered a New World and a new race previously unknown to the Old: “O brave new world, That has such people in ’t!”

Eventually, the vast new knowledge generated by European explorers was conceptualized by great 18th-century scientists such as Linnaeus and Blumenbach into models in which human variety is summarized in a limited number of large-scale races.

For example, Blumenbach came up with five big races: Caucasians (white, but including both sides of the Mediterranean and extending as far east as Bengal); Mongolians (yellow); Ethiopians (black); Americans (red); and Malayans (brown, islanders sprawling from Madagascar to Easter Island).

We know far more today, especially since the introduction of DNA scans. Still, Blumenbach’s five-race model, despite its deficiencies, is not a bad way to organize a vast amount of complex information about human biodiversity into something comprehensible. Blumenbach leaned heavily toward the lumper end of the lumper-splitter debate (for example, his huge Caucasian race strikes many as too expansive), but that helped his model avoid getting tangled up in excessive German pedantry.

On the other hand, the old Greek haziness has its advantages as well, such as undermining excessive confidence in a simplifying model.