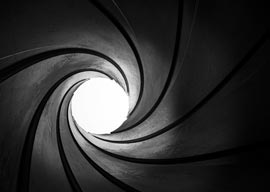 I”m sure it was just a coincidence that the first issue of my firearms association’s magazine to arrive after Justin Trudeau’s election came wrapped in an opaque gray plastic wrapper instead of the usual transparent variety.

I”m not being sarcastic. I do try to leave the augury of such quotidian “signs” to the world’s cranks, yet in this instance I can”t help but wonder:

Was the National Firearms Association concerned that some posties, buoyed by the election of their chosen one, would be emboldened to fold, spindle, and/or mutilate any snail-mailed materials they disapproved of?

(Why wouldn”t they? First off, Canada Post “workers” threatened this kind of ideologically motivated, “shame if something were to happen to it” mail mutiny earlier this year, while they were still on the losing side. And now check out Justin Trudeau enjoying an unseemly rock-star reception from their fellow “nonpartisan” public union staffers at Foreign Affairs. Like I said: emboldened.)

That’s why, in my postelection column, I talked about placing a big gun order while I still had the chance. (One of the few cheap thrills still afforded to me? Shoving big cardboard boxes marked “REMINGTON” into the recycling bin in my Toronto condo and fantasizing about the reaction.) Alas, yet another four-figure tax bill arrived (unmolested, of course) to dampen my enthusiasm for a little retail therapy. Cabela’s will have to wait, but not for much longer. As if there were any doubt, Trudeau has prioritized the reversal of the Conservatives” modest firearms reforms, and the prospect of a resurrected long gun registry”a.k.a. “the billion-dollar boondoggle””hangs like a small cloud, now no bigger than a man’s hand, off in the distance.

Which reminds me that, as screwed up as it is right now, America still has a lot to be proud of: geography of unmatched variety and majesty. And a strain of ingenuity and entrepreneurship that remains almost berserkly unbowed despite bureaucratic antagonism.

And, of course, its gun crime statistics.

Every time there’s a mass shooting in America, smug pseudo-sorrowful lefties start spreading images like this (particularly grievous) one from the Brady Center all over social media.

You know the ones I mean:

Another of my life’s remaining puny joys? Responding to these posts by writing:

The United States is home to more than 300 million people of every race, language, and creed, many of whom are heavily armed. Especially given this nonhomogeneous consistency, 10,000 homicides a year isn”t a badge of shame. It’s a goddamn miracle.

Sometimes I include a link to a recent Harvard (read: “liberal kryptonite”) study-of-studies that begins:

Since at least 1965, the false assertion that the United States has the industrialized world’s highest murder rate has been an artifact of politically motivated Soviet minimization designed to hide the true homicide rates.

And which just gets more devastating by the page.

Anyhow, I have yet to receive a coherent rejoinder.

Frankly, America should carve that “10,000″ number onto the Liberty Bell.