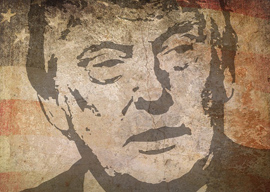 According to Nevada Senator Harry Reid”who is retiring from politics to pursue a career as a Roy Orbison impersonator“Donald Trump’s election “has sparked a wave of hate crimes across America.” Almost as if they were in an echo chamber together with Reid, the passionately white-hating website Salon confirms Reid’s assertion that ever since Trump schlonged Hillary Clinton in the electoral count, there have been “hate acts reported across the country.”

As Democratic officials and their dutiful water-carriers in the mainstream media tell it, Trump’s victory has emboldened tens of millions of rank-smelling white bigots to suddenly flock out of their subterranean caves en masse like guano-encrusted vampire bats seeking racial vengeance. They suddenly feel encouraged by their hatemongering new orange-skinned leader to return to their old bigoted traditions of calling gay people “fags,” black people “junglebunnies,” women “bitches””and, worst of all, to openly refer to Jewish people as “Jews.” But these subhuman Trumpkins are not satisfied with mere hate speech”oh no, they are forming Hate Mobs and taking to the streets to physically attack and cripple oppressed and underprivileged groups in open daylight while livestreaming their racial savagery on YouTube.

“Unfortunately”or fortunately, I guess, depending on how you feel about these things”it appears that many of these reported pro-Trump hate crimes simply did not occur.”

Richard Cohen of the Southern Poverty Law Center”whom I suspect (but cannot confirm) has eaten a knish at least once in his life”told USA Today:

Since the election, we’ve seen a big uptick in incidents of vandalism, threats, intimidation spurred by the rhetoric surrounding Mr. Trump’s election. The white supremacists out there are celebrating his victory and many are feeling their oats.

Well, we can”t have white supremacists feeling their oats, can we?

Unfortunately”or fortunately, I guess, depending on how you feel about these things”it appears that many of these reported pro-Trump hate crimes simply did not occur.

Hate crime hoaxes have been “a thing” at least since the very notion of “hate crimes” was invented. To my knowledge, they were first documented extensively by Laird Wilcox in the early 1990s. In the late 1990s, I even found myself on the receiving end of an attempted hate-crime hoax.

In the wake of Trump’s election, The New York Times, CNN, and the Washington Post  were all suckered by a hoax in Louisiana wherein an 18-year-old Muslim girl told police she”d been beaten, robbed, and had her hijab removed by two white males, one of whom was wearing a Trump hat. The girl soon admitted it was all a lie and now faces charges for filing a false police report.

A viral photo allegedly depicting a Klan rally wherein gleeful Kleagles and Cyclopes celebrate Trump’s victory was soon revealed to be an old picture that didn”t even depict Klansmen.

A Nazi flag that defiantly flapped over a San Francisco house the day after Trump was elected was suspected to be definitive evidence that all Trump supporters are Nazis until the homeowner attempted to explain that he doesn”t like Nazis and that he thinks Trump is a Nazi and therefore, um, he flew a Nazi flag outside his house.

Elsewhere in California, a banner outside a house that said, in giant screaming letters, “YOU CAN HANG A NIGGER FROM A TREE/EQUAL RIGHTS HE WILL NEVER SEE!” sparked the predictable social-media furor over a looming Trumpenreich until it was made public that the homeowner was “an African American male“ who was not supporting Trump but instead protesting America’s legal system in his own uniquely colorful way.

A message scrawled onto a whiteboard at North Carolina’s Elon University that said “Bye Bye Latinos Hasta La Vista“ turned out to have been written “by a Latino student who was upset about the results of the election.”

In the unnecessary state of Delaware, a black woman posted on Facebook that “four males, all of whom were Caucasian” approached her last Wednesday at a gas station, told her that things would change now that Trump is becoming president, and proceeded to call her a “black bitch” and a “waste of air.” She said one of them then flashed a gun and expressed regret that he couldn”t kill her because there were witnesses around. The next day she posted that “charges were filed, fugitives were caught. Yes I [know] names and no I will not release them.” However, the police department where the alleged act of racial intimidation occurred denied any firsthand knowledge of a police report or charges being filed:

We are aware of the circulating post involving a woman who was allegedly harassed/menaced at a gas station. We can tell you that this incident, if it occurred in Smyrna Delaware, has not been reported to our agency. We understand that this person has stated via social media that she has filed charges against the perpetrators. We again want to stress that we, the Smyrna Police Department have no record of this incident.