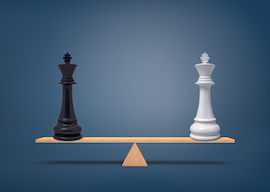 Monty Python were not known for going heavy on political themes during the heyday of the Flying Circus TV show. In their movies, the Pythons employed decent helpings of political commentary, but the TV show was, in the words of the Pythons themselves, rooted not in satire but rather “zany madcap humor.”

The Dennis Moore sketch was a rare exception. It was one of the sharpest bits of political satire to emanate from British TV in the 1970s, and it’s only grown in relevance since then.

Dennis Moore (played by John Cleese) is a highwayman who steals from the rich to provide for the poor. Soon enough, he’s robbed the wealthy of every item of value they have (Moore is reduced to seizing their soupspoons), and the poor, who have now become quite affluent, are becoming more and more demanding as the goodies dry up. One day, after leaving a formerly poor couple’s ornate hovel stocked with purloined riches, Moore, riding through the countryside, is serenaded by an offscreen chorus:

And at that point, Moore has a moment of clarity. Due to his well-intentioned but shortsighted actions, the poor have now become rich, and the rich have now become poor.

“Blimey,” he says, staring straight into the camera, “this redistribution of wealth is trickier than I thought.”

From that point on, when Moore robs a coach, he divides the travelers’ valuables so that everyone has the exact same amount of wealth.

There’s more to the sketch than just the obvious satire of socialism. The punchline—that moment of lucidity when Moore is jolted into a vital realization—elevates the sketch beyond just a funny portrait of a dense, incompetent highway robber. Sometimes we get so used to “things the way they’ve always been” that we’re unable to perceive when circumstances have become inverted. Moore couldn’t see the obvious—that the former poor were now rich and entitled, and the former rich and entitled were now poor.

This is how “victim groups” comprised of people who are no longer victims are able to continually play on our sympathies. It takes a good long time for the average human mind to register a slow but steady sea change. You grow up hearing, “Girls are never called on in math class. Girls are ignored by math teachers. That’s why women never go into STEM as a profession.” You hear that again and again, to the point where it becomes canon. And when teachers begin to overcompensate for this imbalance, and the imbalance becomes reversed—with boys now the victims of “gender-biased grading” that leads to “21 percent of boys falling behind girls in math during middle school”—it can be hard for many people to accept the new reality or part with the old one.

“Sometimes we get so used to ‘things the way they’ve always been’ that we’re unable to perceive when circumstances have become inverted.”

Without a “Dennis Moore moment” to knock some sense into us, it’s possible that the inversion can go unnoticed for decades, because the old imbalance is too embedded in our brains.

We all “know” that women get paid less than men in the corporate workplace, because sexism and uteri and misogyny and such. I mean, that’s the reality, right? So the corporate Robin Hoods need to remedy that wrong by evening up the playing field. Well, just last month, a quaint little mom-and-pop outfit called Google realized that it had been so busy “evening” the imbalance that it was now grossly underpaying male employees for doing the exact same jobs as female ones.

The new payment discrepancy “flips the typical gender pay gap narrative on its head,” according to NPR. But hey—at least Google had a Dennis Moore moment (to an extent). That’s a rarity these days in a nation that seems increasingly reluctant to abandon obsessions over past inequities and admit present-day progress. It amazes me that these days I’ll still hear people say things like “Why can’t we have female action heroes in movies? Or action heroes of color? Why must action stars be white males?”

That was a valid criticism of Hollywood…in the 1960s. Today, audiences are ceaselessly inundated with female action heroes and action heroes of color. Again, the imbalance has been reversed, but without the benefit of a Dennis Moore moment, people can remain blind to the change.

Which leads me to Jussie Smollett. Not since Johnny Mathis survived the 1980s without becoming an emaciated AIDS mummy has there been a more fortunate gay black entertainer. Smollett dodged a bullet he himself fired, escaping any and all penalties for a fake hate crime that forced Chicago cops to work many hours of overtime, egged on by a media that declared Smollett’s late-night noose attack genuine the moment he finished telling the tale, as all Trump-supporting whites became potential suspects in a hoax carried out by the two Nigerian princes Smollett had hired for the task.

And who cheered Smollett’s good fortune last week at the NAACP Image Awards? Only the telecast’s host, a beached whale named Anthony Anderson (star of the apparently still-on-the-air sitcom Black-ish), who told Variety that he’s totally in Smollett’s corner. “I’m happy for him that the system worked for him in his favor because the system isn’t always fair, especially for people of color. So I’m glad it worked out for him. It’s not my place or any other person’s place to judge him or what not.” In other words, I’m glad he got off, and it’s not the job of the justice system to “judge him” for “what not” (“What?” Faking a hate crime. “Not?” Prosecuted).

Anderson, in case you’ve forgotten, has skirted three rape accusations since 2004 (the most recent one occurring last year). In each case, authorities Smolletted the charges into the wind. Regarding one of the accusations, Anderson told a radio interviewer what he would have done to his accuser back in “the old days” before he got famous: “Back then we could’ve put her in the trunk with some plastic and took her for a little ride,” he said, adding, “You can’t even call nobody a bitch no more.”

So, Anderson either raped as many as three women and got away with it (in which case, I suggest his show be renamed Rape-ish), or he was the victim of one or more rape hoaxes, in which case his kudos to Smollett for an unpunished hoax come off as a tad hypocritical.

So let’s recap. A black star of a black TV show gets off scot-free due to a black state’s attorney and a black former first lady, and is cheered by another black star of a black TV show, who may have gotten away with as many as three rapes, while (as the Daily Beast had the guts to point out) skirting any #MeToo repercussions from the “believe all women” Hollywood bimbots. Roseanne Barr had her life destroyed over one tweet, while Smollett is cheered by black Hollywood at an awards show hosted by rapey Anderson, who’s suffered zero repercussions for publicly advocating violence against women who accuse men of sexual assault.

This sounds like a big stinking mound of black privilege, if you ask me.

If you’ll recall, one aspect of Smollett’s tall tale was that his fictional white MAGA attackers tried to pour bleach over him. There’s an irony in that claim that most people missed. Forcing victims to drink bleach (and other caustic liquids) is very much a nonwhite criminal specialty. In 1992, a group of self-styled “black revolutionaries” in South Carolina decided to, in their own words, “capture a white woman” to “avenge 400 years of oppression.” They kidnapped a 25-year-old white girl, raped her repeatedly, forced her to bathe in bleach, shoved bleach up her vagina, and shot her five times in the face. Although the triggerman was sentenced to death, two of the rapists got less than ten years in prison, the other two got less than six years, and their black girlfriends who were accomplices received suspended sentences. The victim’s parents told the press that there was nothing racial about the crime (even though everything was racial about the crime).

In 2015, two noble Latinos, Raymond Miranda (15) and Ruben Melanson (16), broke into the Camelot Retirement Home in Hemet, Calif., and repeatedly raped an 87-year-old white woman, forcing her to drink bleach when they were done. The woman, formerly independent but now confined to a wheelchair and tethered to an oxygen mask, thanked one of the boys at trial for apologizing for his boo-boo, and, with California’s “Who’s a good boy? Who’s a good boy?” early release for good behavior policy, the Mexican humping beans will likely be out in a decade, still young enough to pursue careers as chefs serving up the amazing food that makes immigrant crime totally worth it.

See where I’m going with this? Smollett invents a phony bleach attack that frames whites, and the media can’t wait to lynch not just the nonexistent white attackers but every white rightist, because (for some reason) they’re all responsible for the (fake) crime. Black entertainers who’ve skirted criminal charges cheer Smollett for skirting criminal charges. Meanwhile, nonwhite criminals who’ve actually raped and murdered whites with bleach (while receiving ridiculously paltry sentences) are defended by their white victims and memory-holed by the press—the same press that paints whites as incurable racists.

The concept of “white privilege” is a ruse to keep sane Americans (of all colors) from having their Dennis Moore moment regarding race. These days, nonwhites are as likely, in some cases more so, to benefit from privilege as whites. Nonwhites are not perennial victims, and whites are not perennial victimizers. In 1890 America? Yes. But we need that Dennis Moore moment to make us realize that it’s no longer 18-fucking-90.

The “white privilege” mantra is like a hypnotist’s chant. It enables people to defend Jussie Smollett by saying, “Well, maybe he did get away with a crime, but good for him, because people of color never do” (even though they often do).

Sadly, unlike Moore, we don’t have an offscreen chorus scolding us for being “stupid bitches.” Would that we did…maybe it would force at least a few of us to finally recognize the reality of our changed circumstances.