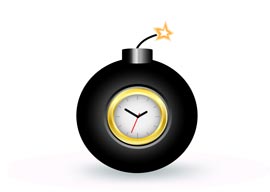 A phone rings in the Oval Office. President Obama drops his practice club and rushes to his desk. Raising the handset of the turquoise-green, crescent-decorated emergency phone to his ear, he listens, his face reflecting the intensity of the moment. It’s as he feared”somewhere in America, a Muslim’s feelings are hurt. Brunch with Pharrell will just have to wait; this president has a tweet to compose.

Okay, so maybe it didn”t exactly happen that way. But last week, when a Muslim high school kid’s homemade clock that resembled a suitcase bomb was bafflingly mistaken for a suitcase bomb, the most powerful man in the world took time out of his day to tweet support for the humiliated student. But this piece isn”t about Mark Zuckerberg (or Obama, who also happened to send a supportive tweet). It’s about how Muslims in the West are often held to the kind of standard normally reserved for the delicate or the disabled.

By all accounts, young Ahmed Mohamed’s jerry-rigged clock was just that, and nothing more. But the fact is, this kind of overreaction to “potential” threats is all too common in post-Columbine American schools. Non-Muslim kids have been arrested or suspended for chewing a Pop-Tart into an L shape, writing a story about hunting dinosaurs, or coming into contact with an ordinary, everyday leaf, and none of those incidents merited a personal tweet from the president or an invitation to the White House. But a Muslim kid being “victimized” by overzealous school administrators became a headline-grabbing, cataclysmic event. Based on news reports of the incident, Mohamed’s engineering teacher told him to keep his invention out of sight during the school day, and he didn”t. He purposely turned it on in another class, a different teacher saw it and heard it doing its R2-D2 impression, and typical bureaucratic fumbling ensued. But rather than suggesting that young Ahmed should have obeyed his engineering teacher’s sage instructions, President Obama, Mark Zuckerberg, and the mainstream media quite literally accused the school of trying to kill the very future of mankind.

“There is a double standard at work here, but it’s hardly “Islamophobic.” If anything, it’s Islamoprotective.”

There’s been a lot of speculation regarding young Ahmed’s motivations, and I”ll leave that for other writers to explore. I”m more interested in the reaction of the media, the politicians, and those fine folks who yell “Islamophobia!” anytime a Muslim gets a case of the butthurts. There is a double standard at work here, but it’s hardly “Islamophobic.” If anything, it’s Islamoprotective. The expelled and arrested non-Muslim kids didn”t receive outpourings of sympathy because they were expected to know the “rules” and never accidentally breach them. However, in young Ahmed’s case, of course he should be able to parade through school with an item that, to the average person, might look a little “bomby.” Of course he should be allowed to disobey his teacher. It’s not his responsibility to be cautious; it’s the school’s responsibility to preserve his self-esteem at all costs.

This double standard goes beyond the schoolyard. In 2004, I was working on a documentary film about Mel Gibson’s father, Hutton. When The Passion of the Christ opened, various advocates for “tolerance” called on Mel to repudiate and renounce his dad, a traditionalist Catholic with admittedly unfriendly views toward Muslims and Jews (and, for that matter, mainstream Catholics). Around the same time, in Lodi, Calif., a Muslim named Hamid Hayat was arrested for being part of a terrorist sleeper cell. What none of Hayat’s defenders”the press, Lodi city officials, local imams”denied was that Hayat hated Jews and collected “jihadist” literature. The argument of those who defended Hayat boiled down entirely to “he’s full of hate, but he didn”t kill anyone. It’s just words.”

I was struck by the difference in the way Hayat and the Gibsons were treated. In the case of the elder Gibson, the outrage was purely over his words, and his own son was expected to denounce him. In Hayat’s case, “it’s just words” was his defense. Nobody in the Lodi Muslim community was pressured to denounce him for his words. As long as he didn”t actually kill anyone, he’s an okay Joe.

Non-Muslims, whites specifically, are held accountable in a way that Muslims are not. We see it with Canadian and European “hate speech” laws, which are almost exclusively applied to whites. “White speech matters” might as well be the rallying cry. With Muslims, the standard is different. Hate speech from Muslims is dismissed with a wave of the hand and a “they don”t mean no harm.” Newsweek‘s Jonathan Alter approvingly explains why Muslim words don”t matter:

Of course it’s hard to admire Muslims who spew hate as good people. [UNC professor Charles] Kurzman explains the inflammatory rhetoric as the product of what is sometimes called “Radical Sheik,” in homage to the “Radical Chic” white supporters of the Black Panthers who gathered at Leonard Bernstein’s apartment in 1969 and were famously chronicled by Tom Wolfe. He argues that as offensive as it might be, the rhetoric should not be confused with real terrorism…. The connection between words and deeds turns out to be tenuous at best.

This double standard is especially glaring in the case of Escondido (Calif.) city employee John Friend. Friend was fired from his clerical job in the Escondido city manager’s office because, in his spare time, he “operates an anti-Semitic website and is active in a movement that blames Jews for the 9/11 terror attacks” (according to The San Diego Union Tribune. Friend is indeed guilty as charged of being an anti-Jewish blogger, and my goal is not to defend his views. Rather, I”d like to compare the dismissal of Friend (and the accompanying media coverage) with the inaction and complete media disinterest that greeted the revelation that Southern California Edison (the largest subsidiary of Edison International) hired an advocate of suicide bombings as its in-house counsel. And if this is news to you, if you”ve never heard the name Fadia Rafeedie Khoury, it’s because no one in the media would cover the story.