Oxfam and the Fall of the Moral Monopoly 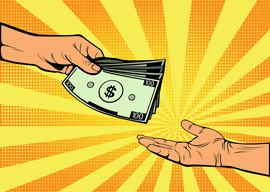 “Now, that represents a degree of hypocrisy I’ve hitherto suspected in you but not noticed, due to highly evasive skills.” So says the eponymous lead character in the cult comedy Withnail and I. We have the same reaction to the global charity Oxfam having covered up extravagant sexual exploitation of women and girls in Haiti. Around the world, donors are looking with nausea at the monthly payment that was supposed to make them feel moral. And now this!

Oxfam has come a long way from its founding in Oxford to alleviate Greek wartime famine (hence Ox-Fam). It has since evolved into a social-justice behemoth with not one but six stated goals—ranging from “ending poverty” to empowering women. Upstream, its proffering of a moral economy is now deeply embedded among Western consumers. You can franchise a music festival knowing the local adulation will be merely a by-product of Oxfam’s higher goals. Ditto kitting out your person and house in the latest fair-trade ethno-produce. The West has learned how to package virtue—and Oxfam has it down to a T.

“The writ of #MeToo clearly stops at the gates of left-wing charities.”

Government has become a significant participant in this moral marketplace. The British foreign-aid budget was ring-fenced throughout the financial crisis—with significant funds going to organizations like Oxfam. Lobbying governments for both money and outcomes has in turn become a primary charitable goal, obscuring the original purpose of charity as a private means of alleviating suffering. Unsurprisingly, the British government is now experiencing moral blowback from the scandal. It was simply unprepared for the events in Haiti to shatter the illusion of the irreproachable aid sector. Worse is now expected.

Many privately admit such a dénouement is long overdue. What do you expect jaded Westerners to do on their own time, while out in the field? Sex workers have long enjoyed a symbiotic relationship with the deployed military, so why not aid workers? And by what standards should we judge the girls themselves, who stripped off to don Oxfam T-shirts? There is not yet any evidence of coercion, although testimonies are now being gathered. But there are darker indications further up the chain. Local drivers were told to procure girls or lose their jobs. When a whistle-blower went straight to the head office in London with news of underage sex parties, there was a cover-up.

If this sounds familiar, it should be. The response mirrors that of the Catholic Church as it faced the abuse revelations that first emanated from Baltimore. The fallback position was that because the organization’s goals are beyond reproach, its name must be defended from scrutiny. Like the Catholic Church, people quietly moved off into new roles in precisely the same environments—for years. Like shamed churchmen, they now appear ambivalent if not tone-deaf regarding criticism (perhaps mindful of left-wing sensibilities, the country director responsible has taken particular umbrage at the suggestion the villa used was “chic”). Given the organization’s stated goal of empowering women, it has presumably been rooting out identical behavior from local elites for decades. And yet it has held itself to a lower standard.

This speaks to a curious shift in the modern world: the institutionalization of morality. Now, institutions have always been the repository of morality—just ask the Church. But whereas institutional morality used to be the summa of individual morality, it now seems to have supplanted it. The aggressive juxtaposition between personal and institutional standards seen at Oxfam is now common across the board (not least in left-wing parties on both sides of the Atlantic). Yet because morality is one of our strongest innate impulses—as Ayn Rand knew—expropriating it for institution-building remains tremendously powerful. Sniffing out the power of the moral baton, even corporates are now flooding Twitter with social causes (I tweeted Volvo to ask how their cars are achieving gender equality; they tweeted back).