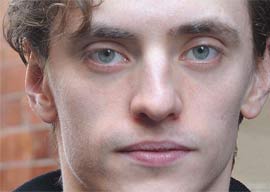 I read The Guardian and The New York Times as a fat man jogs: I think it will do me good. Most of us read to confirm our prejudices, and so it is a good exercise to read what one will probably disagree with. How can one argue unless one knows with whom or with what one is arguing?

I opened my Guardian the other day and saw a large picture of a young man coyly opening his shirt and revealing a picture of Vladimir Putin tattooed on the center of his chest. Who was he? I wondered (the man with the tattoo, I mean, not Vladimir Putin). Some kind of Petersburg hoodlum who had just been sentenced to twenty years in Siberia for armed robberies of banks? No: He was Sergei Polunin, the famous ballet dancer who had resigned from the Royal Ballet in London and had just been sacked from the ballet in Paris.

He had been sacked because of his recent messages on the antisocial media. According to him, it was not so much his opinion that men should be men and women should be women that was the occasion of his dismissal, but his derogatory remarks about people who are fat:

Let’s slap fat people when you see them. It will help them and encourage them to lose some fat. No respect for laziness!

This, of course, is completely against the modern orthodoxy, promulgated by the conspicuously compassionate, that obesity is something that just happens to you like an illness, and not (predominantly) the natural result of something that you do; though surely no person of minimal intelligence could have taken Polunin’s words as an incitement actually to slap fat people, nor would the fact that he published them constitute an excuse for anyone who did take them literally. His remarks lacked sympathy, no doubt, finesse, subtlety, and so forth, but were hardly a good reason to sack him. He is a ballet dancer, not a social philosopher or physician specializing in the treatment of the fat.

“While claiming to be the Bad Boy of Ballet, he was in fact merely following the most nihilistic of fashions in an ovine manner.”

On the other hand, his tattoos (he has many, including one that claims he is not a human) would have been a good reason to sack him. It is not so much that he tattooed Mr. Putin on his body that appalls me, as that he tattooed anything at all. While claiming to be the Bad Boy of Ballet, he was in fact merely following the most nihilistic of fashions in an ovine manner.

But the writer of the article in The Guardian, who was not very sympathetic to Polunin’s views, wrote nothing against tattoos as such. On the contrary, he was almost obsequious toward them, as is now almost de rigueur among the right-thinking. He said of Polunin:

His face is as sculpted as his body and he has a sweet tattoo on his cheek—a dove and a figure three shaped into a heart.

Polunin told the writer that he had gotten this tattoo because he wanted to “unite England [where he was then working], Russia and Ukraine.”

I suppose sweetness is in the eye of the beholder, but for myself I see only vulgarity and stupidity in it. As for the sentiment allegedly behind it, its fathomless shallowness appalls me. Could any man seriously think that sporting a small but disfiguring tattoo on his face would contribute anything to the resolution of intractable political problems? This makes the death of Little Nell in The Old Curiosity Shop seem like an exercise in hard-edged cynicism.

At the end of the author’s interview with Polunin, he asked him what he would do next, now that he had alienated so many patrons and employers. Polunin replied that he was “focused on creativity” but that he might “even treat himself to a new tattoo,” across his shoulders, to the effect that “I want to save and protect.” To which the author added, “It’s a nice idea, but it may be a little late for that.”

It should be borne in mind that The Guardian is directed toward an educated and cultivated readership, perhaps the upper 5 percent of the population at most. Its website publishes all its content and has a large readership in the United States and Australia. It is unlikely that the newspaper commissions authors to express opinions grossly at variance with the sentiments of its readers; for readers such as I—unsympathetic to its worldview and who read it for the special reasons I have indicated—must be a tiny proportion of its overall readership.

In other words, it is probable that there are hundreds of thousands, if not millions, of educated people in the West who believe, or at least countenance the idea, that tattooing “I want to save and protect” across someone’s shoulders is “a nice idea,” and that the idea could have a beneficial effect on the world, provided only that it is “not too late,” as sometimes antibiotics are given too late in the course of an infection.

Is there any imaginable problem whose solution could be a tattoo across the shoulders saying “I want to save and protect” (save and protect what, exactly?), moreover a solution that if applied too late would cease to be a solution as it was before?

It has often been remarked that it takes a certain level of education to believe the most obviously preposterous things, and this seems to be another instance of the deleterious effect of education on the understanding. Not until the educated middle classes took up tattooing did anyone in the West suppose that the practice was anything other than a fairly primitive means of identification with a group, often a marginalized group at that; certainly no one imagined that a tattoo on the face could be “sweet” or that the words “I want to save and protect” tattooed on the shoulder were, or could be, a solution to anything at all.

I cannot recall any article in the serious press, or the press that takes itself seriously, that deplores the fashion for tattooing. This, I suspect, is because most journalists and writers fear being called conservative or reactionary, being regarded as not hip, more than they fear anything else. One must never underestimate moral cowardice as a factor in human existence.