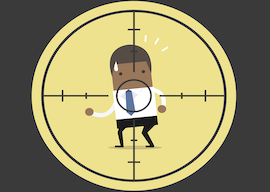 Antwann Brown may have a rap sheet going back 25 years…he may have a record that includes busts for drug dealing, dealing near a school, grand theft, and domestic battery. But last Wednesday morning, as he hitched a ride to work with a pocketknife in his trousers (don’t we all go to work that way?), he felt certain that on this fine, sunny day, he could go a full 24 hours without committing a felony.

Brown’s driver described him as being “in good spirits.”

Unfortunately, upon arrival at Dyke Industries (the Tallahassee construction-materials company, not the international strap-on conglomerate), Brown’s boss informed him that he was being let go.

Well, if you’re Antwann Brown, what you do is start stabbing everyone in the place. To be exact, first he called his pastor and begged forgiveness for what he was about to do. He explained that he’d been concerned for a while that he might get fired, and now that his fears had been realized, he had no choice but to carve up those who’d “wronged” him. And a few bystanders, too. One poor bastard named Bobby Riggins had just arrived for a job interview when Brown delivered a series of imprecise incisions to his abdomen. Bleeding out, Riggins called his wife and told her, “Baby, I’ve been stabbed five times” (trivia: That’s the original opening lyric from “Two Out of Three Ain’t Bad”). Amazingly, amid a sea of slashed arteries and collapsed lungs, Brown’s many victims are all expected to survive.

A day later, as the “top polling” Democrats shambled on stage for their latest “who suffered the worst oxygen deprivation at birth” public tard-off, each candidate took aim at Trump over the El Paso shooting, which, the pinheads claimed to the cheers of the cymbal monkeys in the audience, was caused by white supremacist ideology, which Trump has refused to properly “denounce” (even though he actually has, many times).

As the marble-mouthed cretins blamed the “epidemic” of mass shootings on evil right-wing white guys, I thought of Antwann Brown. Because check out this stat: Five of the six workplace mass killings in the U.S. since 2010 have been carried out by black dudes. That’s 83 percent. Talk about overrepresentation. Add Antwann Brown to the mix (granted, no one was killed, but not for lack of trying), and it rises to 85.7 percent.

Prior to Brown’s bloody rampage, we had DeWayne Craddock, the Virginia Beach Department of Public Utilities employee who murdered eleven co-workers and one bystander on May 31. While the press initially claimed that Craddock was a “nice guy” with no problems at work, it was soon revealed that he was facing disciplinary action for a violent on-the-job fight.

Feb. 19 of this year gave us Gary Montez Martin, an employee of the Henry Pratt Company in Aurora, Ill. Martin had a history of violence, and upon being informed that he was being terminated, he opened fire on his colleagues, killing five.

Aug. 3, 2010: Omar Sheriff Thornton, an employee at Hartford Distributors (a Budweiser wholesaler) in Manchester, Conn., murdered eight co-workers after he was informed that, due to his fondness for stealing beer from work (including entire kegs), he was being let go. After the shooting, Thornton called his mama and told her, “I shot the racists that were bothering me.” NAACP-connected “educator” Omali Yeshitela honored Thornton with a lengthy tribute, concluding that “if he was caught getting beer, he was only getting compensated for stolen black labor.”

Wikipedia doesn’t include the Sept. 16, 2013, Navy Shipyard shooting on its list of workplace mass killings, but The Washington Post does, and that’s good enough for me. Aaron Alexis murdered twelve people in a rampage that began in the office where he’d worked as a contractor the previous week. According to the Post, Alexis’ co-workers had expressed concerns about his job performance, and prior to the shooting Alexis told his roommate that he felt his honky bosses wuz discriminatin’ against him.

Adding Alexis to the list, we now have disgruntled black dudes behind seven of the eight revenge-based workplace massacres that have occurred in the U.S. since 2010. Talk about a “black-owned enterprise.”

Going back in time, we find that some of the nation’s most ambitious and spectacular disgruntled-worker bloodbaths were committed by blacks. David Burke, an employee of PSA/USAir, was fired in December 1987 for petty theft and non-petty drug smuggling. Using his USAir credentials, which had yet to be revoked, Burke bypassed security and followed his boss onto an L.A.–to–San Francisco commuter flight. While in midair, Burke shot his boss, then entered the cockpit and killed the crew. Then he rode the plane down. Forty-three people died.

And let’s give it up for Auburn Calloway, who, in April 1994, tried to hijack a FedEx cargo plane and crash it into a populated area. Calloway, a FedEx employee, was under suspicion for fudging his work hours, so he smuggled a hammer and speargun onto a Memphis–to–San Jose flight to murder the pilots. When the surprise hammer attack failed, Calloway tried to use the speargun. Fortunately, “Stab Calloway” was subdued by the wounded and bleeding pilots.

With mass shootings in general, blacks are overrepresented, but with workplace mass killings, they have greater representation than Asian kids in a UC Irvine STEM program. So why aren’t any Democrats talking about this? Hell, why aren’t any Republicans talking about this? One right-wing nutcase blows away some Hispanic Walmart shoppers, and everyone piles in the Scooby van to find the “real” culprit (ideology? Trump? Guns? Video games?). But 85 percent of workplace “revenge” mass killings are committed by blacks, and that doesn’t even merit a cocked eyebrow.

At the very least, why aren’t “black leaders” being asked to speak out against afro-man-made workplace revenge violence?

Of course, I’m asking a question the answer to which we all know. Leftists can’t address the black near-monopoly on workplace massacres. Their solution to atrocities like El Paso is “blame ideology, blame the words of politicians, blame the silence of politicians who don’t speak out, and blame Twitter and Facebook for not banning anyone and everyone whose words might have influenced the shooter.” You think they’re going to apply those standards to the problem of disgruntled black workplace killers? After DeWayne Craddock’s rampage, I took to Twitter to challenge Al Sharpton, Barack Obama, Don Lemon, Jesse Jackson, and the NAACP to denounce black workplace killings.

Not a peep in response from the professional race-hustlers. Even though those telegenic tumors can manage to link any minor thing, from jaywalking accidents to drowning, to “white supremacy,” they somehow fail to see anything but random generation when disgruntled workplace killer after killer after killer is black. And the silence is only a part of the hypocrisy. If, indeed, ideology and “reckless” words influence mass killings, it’s odd that leftists actually go out of their way to promote content that seems calculated to play into the “everyone’s out to get me” worldview of black workplace murderers.

In 2015, The Atlantic trumpeted the arrival of a study by the National Bureau of Economic Research that “shows,” using “data,” the “unfortunate reality” that “black workers receive extra scrutiny from bosses, which can lead to worse performance reviews, lower wages, and even job loss.” Yes, black people, your boss is picking on you because of your race; your desire for vengeance is justified. “Black workers are disproportionately monitored,” The Atlantic concluded; it’s a fact, and the new study proves it.

Until you actually read the study. Most Atlantic readers probably assumed that the “data” referred to by the author meant, you know, “data.” Like, facts and statistics. But no. The study’s authors, Costas Cavounidis and Kevin Lang, offer no data. Instead, they begin with an assertion (“black people are unfairly monitored at work by their employers”), and, even though they don’t bother to provide evidence (even anecdotal) to back up that claim, they create a “model” to “demonstrate” that should their assertion be true, it could explain high black unemployment rates (which have actually declined during the “racist” Trump years).

The study is filled with sentences that begin “our model unrealistically assumes” and “if the other aspects of our model were a rough representation of reality” and “we have assumed unrealistically” (the word “assume” is used 31 times in the 48-page document). As coauthor Cavounidis, who speaks like a caricature of a snooty frat boy from Animal House, admitted in an interview when the report was released, his conclusions are what “you can imagine” would be true if the study’s assumptions are correct.

So committed is Cavounidis to his 1962 frat-boy persona, his study doesn’t even acknowledge the possibility that some employers are black. “A negro employer? What brazen balderdash, Muffy.”

Yet The Atlantic—and the hundreds of other publications, including “black media” websites, that promoted the study—failed to mention that the entire thing is based on assumptions, not “data.”

Now, I’m not suggesting that the Atlantic piece or the NBER study caused any of the recent incidents of workplace violence. Frankly, I doubt any of those perpetrators would be able to pronounce “Cavounidis,” let alone comprehend a news article containing words with that many syllables. I’m simply pointing out the fact that as leftists—including presidential candidates—continue to claim that right-wing ideology “influences” mass shooters, it might be helpful, or at least amusing, to remind them of the undeniable fact that, over the past ten years, black Americans have pretty much come to own the field of disgruntled-worker mass killings. And the paranoia behind those murders has been encouraged by mainstream academics and journalists.

Trump continues to be slammed for not “denouncing” white supremacy, no matter how many times he actually has. Can’t at least one “black leader” issue one tiny statement about how blacks should maybe not kill their bosses and co-workers after getting fired?

Is that too much to ask?