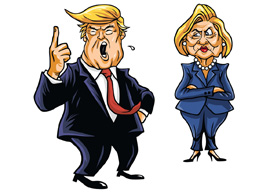 Hillary Clinton’s disastrous Labor Day raises the question: If Donald Trump were as bad as she says, shouldn”t Hillary drop out so a better candidate could beat him?

But first… Why is Trump outsmarting Hillary? And what’s this “alt-right” she’s denouncing?

Hillary has been doing almost nothing but politics for over 40 years, while Trump has had a lot of other fun stuff to think about. Shouldn”t she be dominating him on the issues? How is this a close race?

The New York Times editorial board complained on Monday in “Donald Trump’s Alt-Right Brain“ that:

Donald Trump has devoted most of the past two weeks to discussing immigration, even though only 8 percent of Americans rank it as “the most important problem facing this country today,” according to a recent Gallup poll.

But the quite public struggle within the Trump camp over immigration policy in the second half of last month, leading up to his triumphant Aug. 31 trip to Mexico and speech in Phoenix, turned out to be the best debate on immigration Americans have been allowed to participate in during this century.

Paradoxically, because Trump, having been previously occupied thinking about skyscrapers, golf courses, and TV stardom, is mostly making up his stances as he goes along, his campaign has become a rare example in modern America of democracy in action.

Ideally, you”d want a leader who has thought long and deeply about the fate of the nation, as Charles de Gaulle did during his self-imposed interregnum from 1946 to 1958, before presenting himself for office.

Trump’s not really that guy, however.

“Speaking of offensive ideas, if Trump is as bad as we”ve been told, isn”t it about time for Hillary to withdraw?”

On the other hand, because Trump has been busy, he hasn”t kept up to date with the latest fads at Davos, and thus he hasn”t drifted toward extremism on borders the way Hillary and The New York Times have.

Both Hillary and the Times were far more reasonable on immigration in the past. As recently as 2000 the newspaper editorialized against an amnesty for illegal immigrants because it would “depress the wages of its lowest-paid native-born workers.”

But over the years the Establishment has allowed itself to slip into bizarre positions. For example, on Labor Day the Times cited the following sentence from Trump’s immigration speech as a dog whistle from the candidate to the “shadowy fringes” of the sinister “alt-right”:

Mr. Trump says he isn”t signaling the alt-right…when he said”in a line widely quoted on alt-right websites””There is only one core issue in the immigration debate and it is this: the well-being of the American people.”

Trump, in contrast, subscribes to a sort of American Gaullism that puts the well-being of the American people first.

Hillary’s recent speech denouncing the alt-right has raised eyebrows. It was as if in 1976 progressive-rock titans Emerson, Lake & Palmer had released a double album devoted to excoriating this new band nobody had ever heard of before called the Ramones.

If you can remember back four decades, it might strike you that the alt-right phenomenon of 2016 is basically political punk rock: loud, abrasive, hostile, white, back to basics, and fun.

Johnny Ramone was not as talented a musician as Keith Emerson, but a decade after Pet Sounds and Sgt. Pepper’s he had some timely ideas about how rock should get on track again. As I wrote in a review of a Ramones concert in 1979:

Around 1976, rock music looked like it was heading for a collapse as spectacular as the one that decimated jazz in the Fifties and Sixties. In that period jazz, long the most popular music in the world, became absurdly elitist…. Not surprisingly, jazz musicians totally lost their grip on the mass audience when the artistically inferior but far more vital rock and rollers appeared.

By the middle of this decade, the rock establishment had lost faith in rock and roll…. In 1976, the Ramones released their first album and nothing’s been quite the same since.

But it didn”t seem that way to many at the time. The punk rockers struck most nice people then as barbaric.

Which they sort of were. That was the point of picking up an electric guitar: to make a lot of noise.

Even the most deplorable habit of a few on the alt-right”the use of Nazi imagery”has its punk predecessors. The Ramones” greatest song was “Blitzkrieg Bop.” Mick Jones” proto-Clash band was the London SS. Malcolm McLaren handed out swastikas to his Sex Pistols.

Why? Because it was offensive. And offensive was enjoyable.

Speaking of offensive ideas, if Trump is as bad as we”ve been told, isn”t it about time for Hillary to withdraw?

All August we heard that Donald Trump would either get America into a nuclear war with Russia, or sell out the country to Putin, or both.